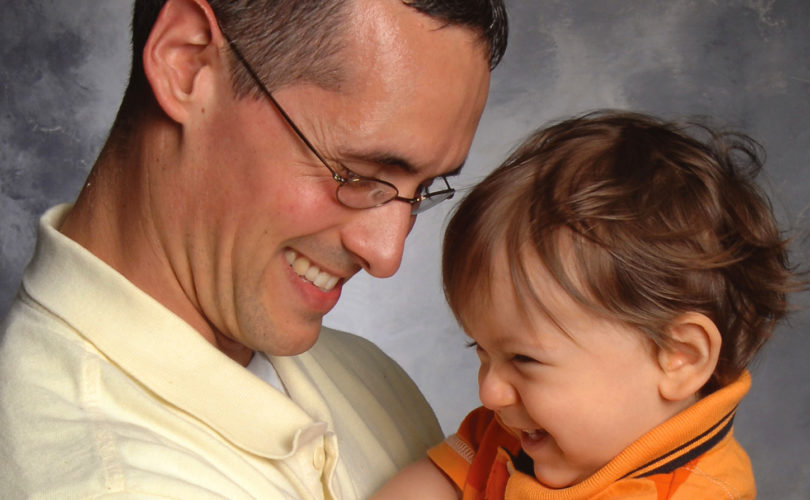 80% of parents who have an unborn child with spina bifida choose abortion. But Chad Judice (pictured with Eli) knows that life is worth it.

What is the most pro-life, pro-God influence in your life? According to Catholic author and speaker Chad Judice, his five-year old, disabled son has been a tremendous source of happiness and faith for even the hardest of hearts.

In an op-ed published in The New York Post, Judice writes that when he and his wife found out their unborn son Elijah had spina bifida, they were offered the option of abortion. While they chose life, it didn't stop them from fearing the worst for their careers, eldest child, and Eli.

“That evening…Ashley cried as she read to me from the literature we’d been given,” writes Judice. “It said 80 percent of parents who receive a spina bifida diagnosis choose abortion.”

“And it told us that our son might have learning disabilities and be paralyzed from the waist down, unable to ever walk.”

According to WemMD.com, the two most common forms of spina bifida have few, if any effects, on those who have them. However, the most rare and most aggressive form of the disability can result in significant problems for life:

Eli's form of spina bifida was severe, but — as it turned out — manageable, writes Judice. Despite surgeries and “medical challenges,” he was out of the hospital within thirty days, though seizures and surgeries would continue to challenge the family. At five-and-a-half, he is entering kindergarten, learning to walk with modern technology, and “his intelligence is at or above average, and he's very talkative.”

But perhaps the greatest miracle of all, Judice says, is the effect Eli has had on those who are outside of the family. His story has helped “some pregnant mothers…to reject abortion,” and “rekindle the dormant faith of some…drawing them into a life with more room for God and family.”

One of those rekindled Christians was a man who, after years in prison, prayed for Eli “as he recited The Lord's Prayer.” According to Judice, “it was the first time he’d prayed in 30 years.”

Since Eli's birth, Judice has written two books about his son and their family. “Waiting for Eli: A Father's Journey from Fear to Faith” was the first, and has received praise from Father Frank Pavone of Priests for Life. According to Pavone, it is “an inspiring story of faith, hope, love, and the power of prayer.”

“The world judges the value of human life by physical perfection, but God sees things differently. To Him, we are perfectly lovable in our imperfection. Uplifting in its reverence for human life in its most fragile stages, WAITING FOR ELI will encourage pro-life activists everywhere, from the most seasoned to the newly initiated.”

Also unstinting in praise was the Chair of the Committee for Pro-Life Activities, Archbishop Daniel Cardinal Dinardo, who writes for Judice's website that the book “chronicles [Judice's] spiritual journey from fear of one’s personal limitations to self-abandonment to the divine mercy of God’s providence.”

The second book, “Eli's Reach: On the Value of Human Life and the Power of Prayer,” received the “Best Book by Small Publisher” award in 2013 by the Catholic Press Association.

“I think of Eli as God’s special gift to my family,” Judice wrote in the Post. “And as I share about him, Eli’s story softens hearts and brings people to a greater appreciation of the beauty and sacredness of life.”