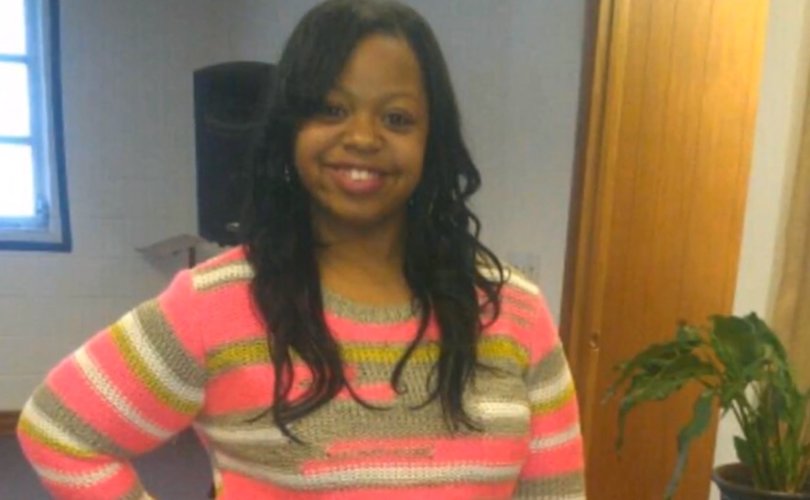 Cree Erwin died after an abortion in Michigan.Operation Rescue

A dispatcher can be heard broadcasting a Code 1 medical emergency alert on July 4, 2016, at 12:41 a.m. for a female in cardiac arrest at the Battle Creek address of her mother, which is only about a block from Bronson Battle Creek Hospital, where Erwin had been treated for abortion complications on July 2.

A police unit was also dispatched.

Engine 2 responded to the alert. Moments later, the dispatcher relayed additional information about the victim, describing her as a 23-year-old unconscious female who was not breathing. No Cardio-Pulmonary Resuscitation (CPR) was in progress.

Sirens can be heard in the background as Engine 2 confirmed the address.

Engine 2 arrived on the scene at 12:43 p.m. According to a WWMT.com interview with Battle Creek Police Detective Sergeant Troy Gilleylen, emergency responders found Erwin dead in her mother’s bed with no outward signs of foul play.

It was too late for emergency medical intervention, and Engine 2 cleared the scene at 12:55 a.m. The entire incident took less than 15 minutes.

While the emergency call took place on July 4, it has been determined that Erwin actually died on July 3, just five days after her abortion on June 28, and about 36 hours after the nearby hospital gave her pain medication and sent away.

Additional research by Operation Rescue and longtime Michigan activist Lynn Mills indicates it is possible that Erwin may not have received an abortion at the Kalamazoo Planned Parenthood facility, which was the closest abortion business to her home. It is unclear where she might have gone as of this writing.

An autopsy has been conducted, but is not expected to be released for two to three weeks.

“We were heartbroken to hear that Cree Ervin had passed away before emergency help could arrive. We continue to pray for the family and for her surviving son,” said Operation Rescue President Troy Newman. “But we must remember what precipitated this tragedy. Something went wrong with her abortion and now she is dead. That fact must not be swept under the rug. In order to keep others from suffering Ms. Erwin’s fate, we will continue to do our own investigations. We hope whoever was responsible for her abortion is found, fully investigated, and brought to justice in a court of law.”

Meanwhile, family members have made funeral arrangements for their lost loved one.

A service will be held for Cree Brianne Erwin-Sheppard on July 14, 2016, at Sanctuary of Praise in Battle Creek, followed by internment at Oak Hill Cemetery.

For more information about the funeral, contact Baxter Funeral and Cremation Service.

1
Canadian doctor sounds alarm over 13 ‘sudden’ deaths among physicians since COVID jab rollout
2
After raid heard ’round the world, the choice is between Constitutionalism and de facto Communism
3
Cdl. Burke warns of ‘advancing apostasy’ in the Church during Latin Mass homily
4
The jabbed aren’t just unprotected against COVID, they’re also suffering the most
5
‘Destruction of the defenseless’: Pro-life archbishop condemns Biden’s pro-abortion executive orders
Subscribe to Daily Headlines »