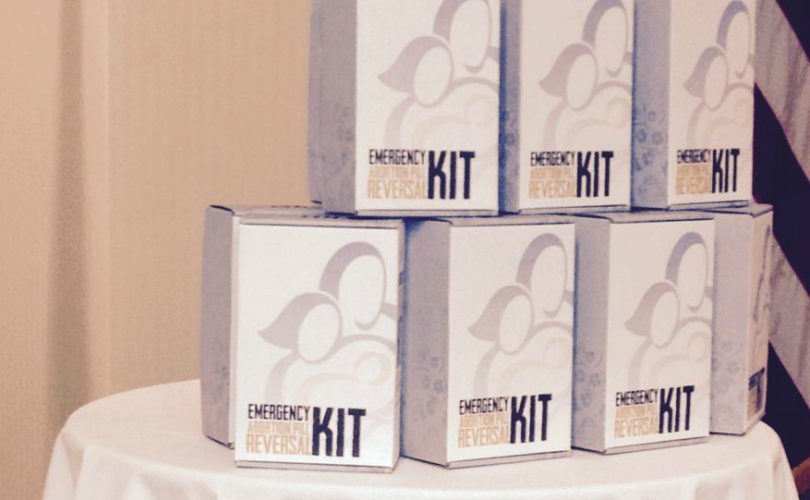 CONCORD, North Carolina, November 5, 2015 (LifeSiteNews) – When Autumn Barnes found out she was pregnant with a second child, she decided to get an abortion. She went to an abortionist and took RU-486, the abortion pill, also called mifepristone.

But immediately, Autumn regretted her decision.

“It just kept running through my mind. I just killed my baby. I have a little girl at home. How is it fair that I just took an innocent child's life?” Autumn said.

Autumn's story of a regret deeper than most of us could ever imagine is not uncommon. Thankfully, Autumn and other women have a chance to change their minds.

Dr. Matthew Harrison has developed what he calls “the Emergency Abortion Pill Reversal Kit.” Essentially, RU-486 kills the growing baby by starving him or her of progesterone, a hormone the baby needs to grow. After two or three days, the mother is given labor-inducing drugs and delivers her dead baby. Dr. Harrison's Emergency Abortion Pill Reversal Kit counteracts RU-486 by flooding the mother's bloodstream with progesterone.

Autumn's regret spurred her to action. She used Dr. Harrison's reversal kit and was overwhelmed with relief to see her baby the next day via ultrasound, alive and well. “I was so happy, I think my smile was contagious,” she said. “Seeing his heartbeat was like oh my goodness that's my baby, and he's safe, and he's alive and hopefully he's healthy.”

Dr. Harrison's kit has saved over 137 babies whose mothers took the abortion pill. All 137 children were born without any complications. “It's exciting, mainly because I see it empowering these women,” Harrison told Fox 46. “I mean they were in a hopeless and dark place at one time, they thought there wasn't any hope.”

Another 76 saved babies are on the way, according to Sara Littlefield, executive director of Abortion Pill Reversal. She says abortion pill reversals have been successful in 45 states and 13 countries.

Littlefield explained to LifeSiteNews, “Every woman and her story is different – from her age to her educational background, to whether or not she's single or married. But the one common thread is that regardless of these differences, the women who call our hotline regret their decision to take the abortion pill.”

“It is humbling to witness the transformation unfolding in the life of each woman as she begins the reversal process,” Littlefield shared with LifeSiteNews. “Every day that passes, her anxieties and concerns melt into joyful anticipation and peace.”

The reversal kit must be administered within 72 hours of taking RU-486. It is also best if the mother has not yet gone through the second phase of an RU-486 abortion by taking the labor-inducing drugs. If she has taken the labor-inducing drugs (cytotec), there is a 5% chance the baby could develop birth defects in his or her face and hands.

There are now over 300 medical centers that use Dr. Harrison's reversal kit. Women may go online to abortionpillreversal.com or call a 24/7 hotline (877-558-0333) to find a nearby administer of the kit.

The Abortion Reversal website shares, “We know that an unplanned pregnancy can be scary and many women make decisions to abort their babies when they are terrified and stressed. We know that after some time thinking about it, many women would like to change their minds about a chemical abortion.  It may not be too late.”

Littlefield is encouraged that more and more people are finding out that RU-486 can be reversed. “The word is spreading across our country and the world that it is possible to reverse the abortion pill,” she told LifeSiteNews. “Our program is growing, and so is our need for medical providers to join our team providing women with a second chance at life for their unborn.”

Abortion is not the end: Priests for Life event highlights RU-486 reversal procedure
The day I performed the first-ever RU-486 abortion reversal