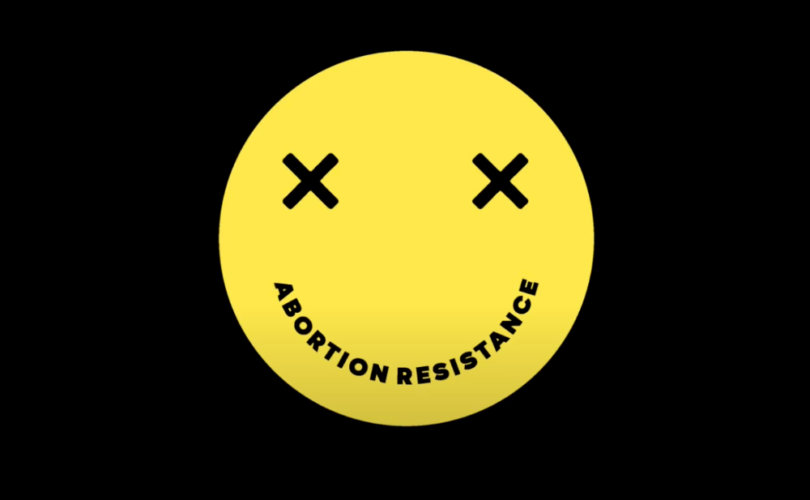 LONDON (LifeSiteNews) — A fresh wave of pro-life activists is emerging in the U.K. as “Abortion Resistance” launched in London on March 19, 2022, with the express goal of “ending abortion in the U.K.” and being specifically aimed at young people.

Abortion Resistance brings a fresh face to the pro-life scene in the U.K., in that its goal — “ending the wide-scale crimes against humanity committed by the abortion industry” — will be achieved through spearheading a resurgence of pro-life youth. With Britain’s schools and universities having become breeding grounds for promoting abortion, resulting in increasing rates of young people being exposed to or undergoing an abortion, Abortion Resistance aims to tackle this head on.

“Our mission is to empower, inspire and encourage U.K. youth,” declared Eden McCourt, co-founder of Abortion Resistance (AR) and director of public relations and media.

“Young people are the key to our future,” she told LifeSiteNews. “If we do not act now to help them understand the value of all human life then abortion will continue to be accepted and promoted.”

Drawing on her previous experience working full-time in the pro-life world, McCourt noted the absence of youth-oriented pro-life outreach in the U.K.

“I noticed that despite the amazing work of other pro-life organizations in the U.K., there isn’t a group dedicated solely to supporting the development of young people to become more publicly pro-life and participate in regular activism,” she said. “There is a huge need for this in our country.”

“In order to connect with pro-abortion youth we need a movement that understands current culture and is vibrant, youthful and energetic,” added McCourt, who highlighted the need to transform the cultural understanding of abortion.

She was echoed by fellow co-founder Alexandra DiFalco, who told LifeSite that the reason “the abortion industry is alive and well” is “because the youth are being neglected.”

A need for youth-oriented pro-life activism

DiFalco lamented how, in light of the technological changes of recent years, “young people have taken to the internet and their peers for education on world issues,” which has been dominated by pro-abortionists.

The proponents of the abortion industry have “staked their claim in the youthful areas,” she said, “and thus have managed to take over the conversation, presenting people with a warped view of the reality of abortion.”

“As these young people progress into life, they will carry over these ideals into their everyday life, and thus the cancer will spread,” she warned. “There is no one having conversations where the young people are, to counter the pro-abort lies.”

And that is where Abortion Resistance comes in. We are here to reeducate the youth and we believe that these days there is no better way to do this than through peer to peer discourse.

“Ultimately in order to win this war on unborn babies and women, we need to shift the way society views abortion,” added McCourt. “This can only be done by counteracting the pro-abortion agenda pushed to youth through media and pop culture.”

The movement will not just be aimed at young pro-lifers, but will also reach out to abortion supporters in an attempt to “open up dialogue on this conversation to which hearts and minds will be changed.”

“Being comprised of anti-abortion young people, Abortion Resistance will connect with pro-abortion youth to inform our future doctors, lawyers, teachers and politicians that the only way to improve social justice in our society is to grant the unborn equal human rights,” said McCourt.

We need to overcome ‘the fear of a losing battle’

As the U.K. is set to mark the 65th anniversary of the implementation of abortion in April, Abortion Resistance is not daunted by the enormity of the task involved in ending abortion. “In my view, the challenge facing pro-lifers today is overcoming the fear of a losing battle,” said McCourt.

While she noted how “often it seems like we may never see the end of it [abortion],” McCourt added that “there is always hope. We just need to have the courage to boldly speak up and speak out against the injustice of abortion.”

Abortion Resistance is going to directly counteract this fear hence our mantra of “Power In Courage” — with the courage of our movement we have the power to shift the nations perspective on the issue of abortion.

Engaging the public in notable, pro-life activism is crucial to ensuring the success of the pro-life cause, added McCourt. “By showing the public that we, the next generation, are loud, that we won’t hold back, that we are bold, that we are unashamed and unapologetic of our anti-abortion position, we will encourage people with opposing beliefs to learn more about this issue and will open up dialogue on this conversation to which hearts and minds will be changed.”

Mission is ‘to end abortion in the UK’

Notable also due to its youth-led team, the group will “provide pro-life youth with regular activism and tangible goals towards ending abortion.” This mission “to end abortion in the U.K.” is threefold:

“We have been told that we need death in order to be successful,” said McCourt. “We have been lied to,” added DiFalco.

The group highlighted the more than 9 million unborn babies who have died through abortion in the U.K. since its legalization, noting how “we are resisting abortion” not only for these unborn babies, but also for the “women who have been lied to and left hurting and heart-broken by the abortion industry,” as well as for the babies’ fathers, and for society at large.

As part of this goal of ending abortion, Abortion Resistance will thus be holding regular events aimed specifically at young people, including campaigns and rallies outside the U.K. Parliament in Westminster, to build up, publicize, and strengthen the pro-life youth culture.

“We loudly advocate for better support systems to be established in society for pregnant women and parents,” proclaims the group. “We disrupt the mainstream narratives that work to normalise abortion. We are the young defending the youngest. We are Abortion Resistance.”

Abortion Resistance is a non-profit, and relies entirely upon donations in order to accomplish its pro-life endeavors.