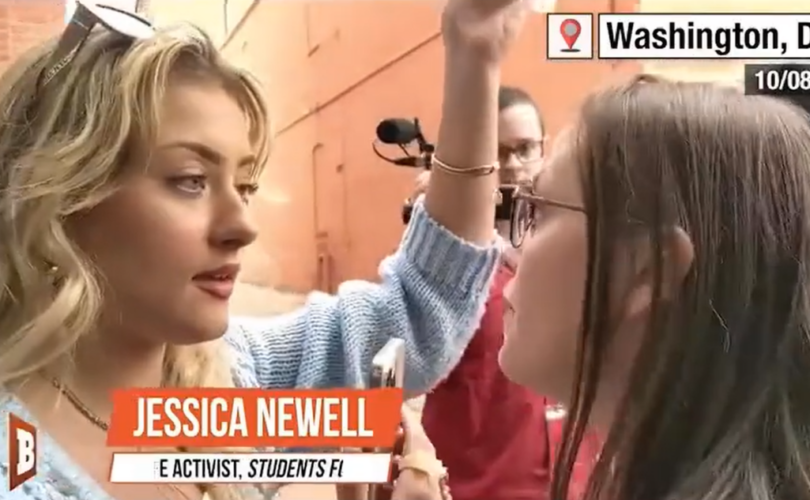 Jessica Newell with Students for Life of America is confronted by an abortion advocate at the Women's March in Washington, D.C.Twitter

(LifeSiteNews) — During the pro-abortion Women’s March last Saturday in Washington, D.C., a pro-life activist was confronted by abortion supporters who told her she should “get raped.”

Thousands of people gathered at the nation’s capital calling for the “right” to abortion. Although greatly outnumbered, pro-lifer Jessica Newell was also present, and she was harassed by two women who refused to engage in a conversation with her.

Newell was attending a counter-protest with Students for Life of America (SFL). The pro-life organization posted to Twitter on October 11 a video of the incident.

“She’s so pretty. Why don’t we just let her get raped, pregnant, and forced to… be a mother?”

Upon seeing Newell, who is holding a sign, a young woman approached her and said, “This is my city. What are you doing here? You’re trying to antagonize people, so go the f*** away.”

“I’m willing to have a conversation and you’re harassing me,” Newell responded.

“She’s so pretty,” said another abortion supporter who entered the scene. “Why don’t we just let her get raped, pregnant, and forced to be a mother?”

Newell quickly told the woman that she would “carry full term,” to which the protester replied, “You’d be traumatized for life, little girl.”

Meanwhile, the first abortion supporter repeatedly asked, “Why are you antagonizing people?”

“I’m not the one who’s traumatized here,” Newell said, referring to the young woman who had first approached her. Then she asked the second protester, “How do you say you’re for women but then tell a woman she should get raped?”

Rather than answering the question, the protester put her arm around the young woman and urged her to “come with her elders.”

“We’ve been fighting for this for 50 years,” she said as they walked away.

Another video shows pro-abortion protesters chanting “thank God for abortion” as they march in D.C.

We counterprotested the pro-abortion @womensmarch to stand for the rights of ALL women – born and preborn. pic.twitter.com/DX6ubeO1EY

“This march, even though they call themselves the Women’s March, is not inclusive to all women or even most women,” another pro-lifer says in the video. “This march is a pro-abortion march, and most women are not pro-abortion.”

Despite the increasing tension and backlash since the Roe v. Wade ruling was overturned in June, pro-lifers are finding renewed passion in the fight to protect the unborn, with many states hosting pro-life marches with record participation.

According to an EWTN interview with Jeanne Mancini, president of the March for Life Education and Defense Fund, the national organization co-sponsored five state marches in 2022. Additionally, the annual March for Life will be held in Washington, D.C. on January 20, 2023.

First March for Life in U.S. after Roe decision draws more than 5,000 to Pennsylvania capitol