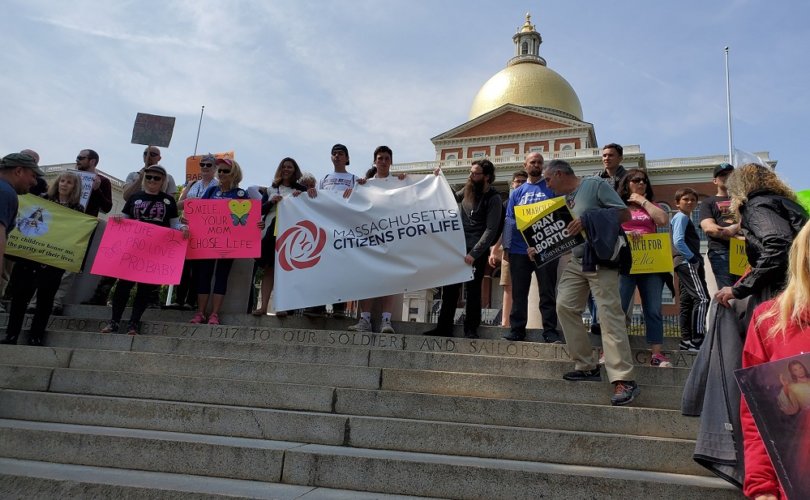 According to the Boston Police Department, more than 600 pro-lifers attended the March — a record number. The Boston Globe reports that they were playing music and listening to speakers as pro-abortion protestors interfered with them. C.J. Williams, the community engagement director for Massachusetts Citizens for Life, told the Boston Herald that two pro-abortion men pushed her and shouted expletives at a group of about 25 pro-lifers as they walked up the street. She also said that an abortion supporter threw urine and a slushie on one of the pro-life speakers.

“One of our speakers… who is Black and gay, was assaulted by the other side and had urine thrown on him,” Williams said. “It got a little bit hectic there; it was not the dialogue I'd hoped for.”

The theme for this year's March was “Love in Action,” and though the pro-lifers struggled to be heard over the pro-abortion shouts of “pro-life, that's a lie, you don't care if women die,” the pro-life speakers shared stories of love and hope that happen when women are able to choose life.

Pro-choice protestors in attendance included members of Boston Feminists for Liberation, who assumed the pro-lifers were holding the rally “to celebrate” the new “heartbeat bills” in states including Georgia, Alabama, and Missouri. In reality, the March is an annual event, and this particular year, pro-lifers were aiming to raise awareness of the concerns they have regarding extreme anti-life bills in Massachusetts. They had hoped to have an “open dialogue” with pro-choicers but that turned out to have been impossible this time.

“The dialogue wasn't as constructive as it really could have been,” Myrna Maloney Flynn, the vice president of Massachusetts Citizens for Life, said in a statement. “We were hoping to understand their reasoning — it got lost in anti-racism, anti-police language.” At a press conference on Wednesday, Flynn announced the results of a poll that showed most Massachusetts voters oppose the state's pro-abortion bill S1209.

The Boston Globe, which severely underreported the number of pro-lifers at the event, said that the abortion supporters carried signs in opposition to the newly passed abortion laws in other parts of the country. Meanwhile, the pro-life activists held signs that said, “Pray to end abortion,” and some even fell to their knees to pray during the confrontations.

Police had to split up several fights, but the Boston Globe says they were able to get things under control relatively quickly and made seven arrests for assault and battery along with disorderly conduct. Despite this, no injuries were reported.

After the rally, most abortion supporters left and the pro-lifers were able to continue with the March around the Common to show that everyone in Massachusetts, born and preborn, deserves to be protected from violence.