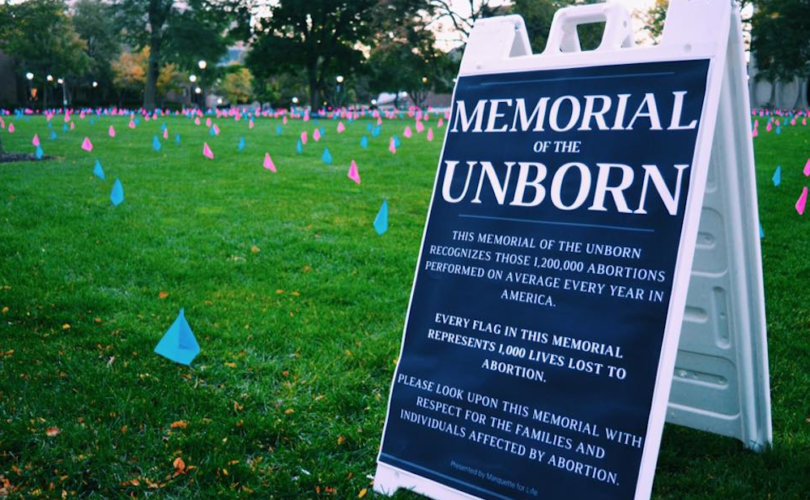 MILWAUKEE, Wisconsin, October 18, 2016 (LifeSiteNews) – Pro-abortion backers trashed an approved pro-life display at Marquette University last week, bragging about it on social media and garnering praise from other pro-abortion student groups. One called it a “shaming display” and also used it to push gender politics.

“My body, my freedom,” We want doctors, not missionaries,” and “Marquette, we want healthcare, not misogyny,” were among the pro-abortion slogans used by the “Marquette feminist community” to obstruct the display board explaining the Memorial for the Unborn.

The memorial was presented by the Marquette for Life student group and approved by the university for its pro-life week. It consisted of 1,200 pink and blue flags symbolizing the 1.2 million abortions committed in the U.S. annually. Within hours of the memorial and its display board being placed on campus last Thursday, it was vandalized by the pro-abortion supporters.

The vandals also put hangers among the memorial’s flags.

Marquette student Clare McCullough took credit and attempted to justify the defacement on Facebook, Live Action reports. Her post included a picture of the damaged pro-life display and stated:

Abortion isn't a good thing. But this is our response to the unborn memorial. We want doctors; not missionaries and our bodies are not your moral battleground. We at least have the right to choose what we do with our lives, thanks for your “inclusion” Marquette University. Shout out to my feminist peers who challenge the status quo, you all inspire me.

University banners were also covered with fliers in addition to the damaged pro-life memorial, the Live Action report said.

“Let me be extremely clear,” Dr. Xavier Cole stated in a Friday email to students. “Defacement is not dialogue.”

“Respectful discussion and even dissent is best done face to face,” he said. “Our issue does not lie in the expression of varying viewpoints but rather in the way that this was handled. Our mission is grounded in respecting the dignity of all individuals and being inclusive of multiple perspectives. Inclusivity by its very nature begins with respect.”

Cole also confirmed that Marquette For Life group’s display was submitted and approved in advance.

Marquette’s College Democrats praised those behind the vandalism in a Facebook post that included the photograph of the defaced pro-life display sign, stating, “Keep fighting the good fight, Marquette feminists. We love & support you.”

When the College Democrats were challenged for commending the vandals and their actions to suppress the pro-life group’s speech, the group was quick to deny involvement, according to a HypeLine report, but supported what the pro-abortion students did, calling it a stand for making women feel safe at the university.

“The Marquette University College Democrats had nothing to do with the defacement of the Pro-Life Memorial,” they stated on Facebook, “but we support the students who stood up for all women in their right to feel safe and included on campus.”

The College Democrats followed with a counter display near the Memorial for the Unborn consisting of black flags in support of the controversial Black Lives Matter political movement, stating in another Facebook post, “Don't be PRO-LIFE out of convenience, BLACK LIVES MATTER TOO! Also women have the right to choose! Their body their freedom! #BlackLivesMatter #Marquette.”

Marquette Empowerment claimed the pro-life memorial “directly undermines” the healing for those who “have been strategically marginalized by oppressive institutions,” by “further stigmatizing abortion.”

“Rather than fostering discussion and understanding, the display is damaging to the mental health of students and a disturbing act of public shaming,” the group’s online statement said. “In the past, students at Marquette have complained to university administration regarding the harmful nature of the display, which, until this year, employed crosses to emulate a ‘fetus graveyard.’”

It then used the pro-life memorial’s flags to take up gender ideology, stating, “The shift to pink and blue – gendered – flags offers no recompense to those interested in human rights and, rather, demonstrates the harmful and misguided conflation of sex and gender and promotion of the gender binary.”

Marquette Empowerment went on to laud Planned Parenthood on the abortion giant’s recent 100-year anniversary, calling it “an organization that has continuously supported the health and well-being of our community and the protection of our rights, where our institution (Marquette University) fails us.”