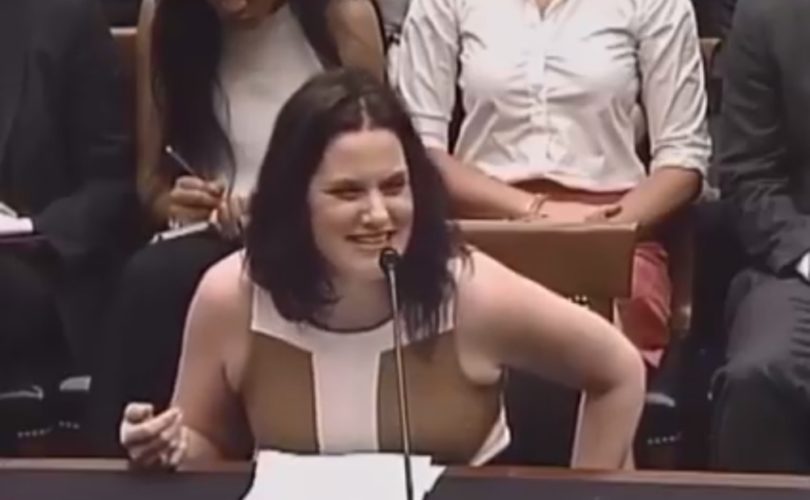 WASHINGTON, D.C., September 15, 2015 (LifeSiteNews) — Thirty-eight years ago, Gianna Jessen survived an abortion. Now, after giving her testimony before Congress last week, more than 2.1 million people have heard her story in a video that has gone viral.

“After 18 hours of being burned in my mother's womb, I was delivered alive in an abortion clinic in Los Angeles,” Jessen told Congress last week. “Victory!”

Jessen, who was born six weeks early, has become a pro-life activist despite being born at only two pounds and with cerebral palsy because of the attempted abortion.

“I am alive because of the Power of Jesus Christ alone. In whom I live, move, and have my being. Without Him I would have nothing; with Him, I have all,” Jessen said in her testimony to the House Judiciary Committee.

Jessen was 12 when she found out that she was an abortion survivor. Two years later, she began her activism on behalf of the unborn.

“Thankfully, the abortionist was not at work yet,” she said last week. “If he had been there, he would have ended my life with strangulation, suffocation, or leaving me there to die. Instead a nurse called an ambulance, and I was rushed to the hospital.”

“Cerebral palsy is a tremendous gift to me,” she stated with a smile. Moments later, she said, “Hear my clearly: I forgive my biological mother.”

Jessen said America would have to face God over abortion, and asked “how many children have died and been dismembered and their parts sold for our ego, our convenience, and our promiscuity? How many Lamborghinis were purchased with the blood of innocent children?”

Jessen also called out men who heard her testimony — “I am asking you to be brave,” she said, noting that “you are made for greatness. You were born to defend women and children, not abandon us.”

Jessen's life was the impetus behind the movie “October Baby,” which grossed more than $5 million, received a 79 percent rating from audience members at Rotten Tomatoes, and was profiled by The New York Times.

The marathon runner and rock climber, who has met her birth mother, was not the only abortion survivor to testify to Congress last week. This clip of Abortion Survivors Network founder Melissa Ohden's opening statement has more than 10,000 views on YouTube.

Ohden, who is married and has a Master's Degree in social work, told Republicans and Democrats on the committee that the abortion she survived “was…forced upon [my birth mother] at the age of 19, but also that it was my grandmother — my maternal grandmother, a nurse — who delivered me in this final step of the abortion procedure.”

Ohden said that her grandmother demanded that the burned child be left to die, but two nurses saved her life.