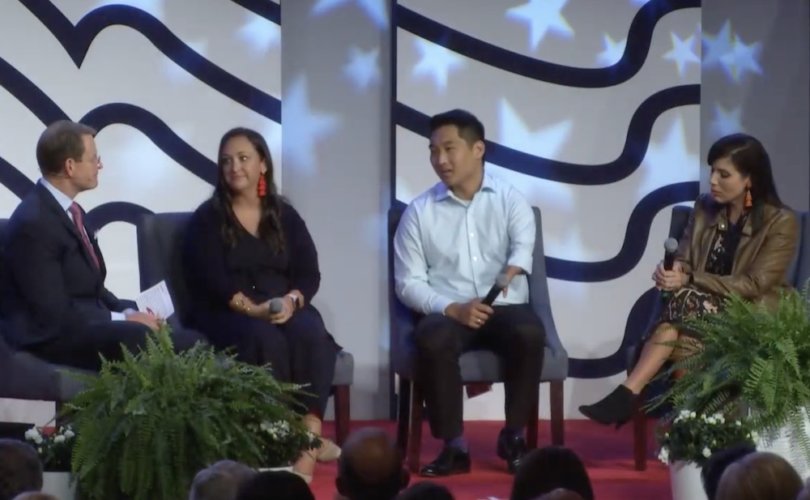 Melissa Ohden, a pro-life public speaker who founded the Abortion Survivors Network, was born at seven months in 1977, after a failed saline abortion. Ohden miraculously survived being bathed in saline solution for five days, and pulled through after being transported to the hospital’s neonatal intensive care unit. She was adopted, discovered the circumstances of her birth at age 14, and eventually tracked down her birth mother, who she learned had been forced into the abortion by her own mother as a 19-year-old college student.

Josiah Presley was born in South Korea to a mother who had thought she had aborted him at two months via a brutal curettage abortion, yet gave birth months later after discovering he had survived (albeit missing an arm). He was adopted and raised by a Baptist pastor in Oklahoma.

Claire Culwell’s mother was also forced into her abortion at just age 13. The abortion killed Claire’s twin sibling at five months, but she survived and wasn’t discovered until it was too late for the abortionist to try again. She was born with persistent health challenges including a dislocated hip and club feet, and found a loving adoptive family.

“I chose to share my story when I realized that God would use me best when I stepped out of my comfort zone,” Culwell said, explaining that her experience would not only put a face to the sanctity of life, but also help inspire compassion and understanding for the pain of post-abortive women like her birth mother.

All three discussed working through painful emotions upon discovering the circumstances of their birth, from anger and resentment to a wish to not feel set apart from everyone else in this way. But all three also report that both reliance on God and finding forgiveness for their biological mothers were key to overcoming them.

“The reason why I speak and why I share is to bring glory to my Creator,” Presley said. “The purpose behind that is to encourage, to exhort, followers of Jesus Christ to give glory to their Creator.”

Ohden and Culwell both spoke to LifeSiteNews on Facebook live at VVS. Those conversations can be viewed below.

Humane treatment for abortion survivors is a live issue right now on Capitol Hill, where Democrats have repeatedly blocked legislation requiring abortionists to transfer infants who survive abortions to hospitals, where they would be given the same degree of care as any wanted newborn. Pro-abortion lawmakers have justified their stance by claiming virtually no abortionist would ever leave a newborn to die, which pro-life researchers, OB/GYNs, and even a former abortionist disputed last month in congressional testimony.