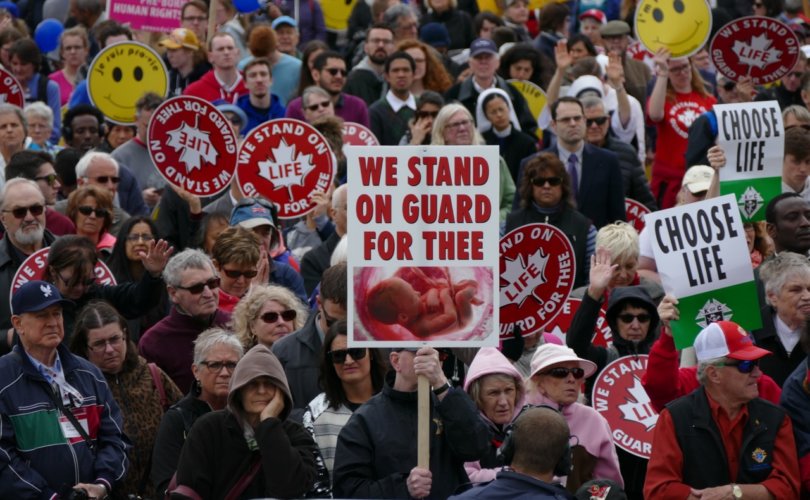 OTTAWA, May 11, 2017 (LifeSiteNews) — For twenty years pro-life Canadians have marched upon the nation’s capital city, demanding legal protection for pre-born children targeted by abortion. Today, thousands joined the annual National March for Life on Parliament Hill, letting the Prime Minister, MPs, and senators know that Canadians have not forgotten, and will never forget, the child in the womb.

The Justin Trudeau Liberal government says “this issue is settled and that we should go away,” Conservative Manitoba MP Ted Falk pointed out.

“Well, Mr. Prime Minister, look out of your window, look down here. We will not go away. We will fight back against the attempts to silence us, we will keep this conversation alive, we will show that all life is inherently valuable … from conception until natural death, and we will do so in an honest and compassionate way.”

The theme for today’s March for Life is “Life, We stand on guard for Thee.”

The theme comes from the last lines of the country’s national anthem and is fitting, given the country’s celebration of its 150th anniversary of Confederation.

For pro-life Canadians, standing on guard for life in the current political situation is no easy task.

The country’s Catholic Prime Minister, Justin Trudeau, has made abortion a defining issue for his leadership, expanding the deadly service both at home and abroad.

Earlier this year, Prince Edward Island joined the rest of the provinces in providing abortions after not offering them for 35 years. And Trudeau had no small part in the matter.

During his 2015 federal election campaign, Trudeau made it clear that should he win the election he would pressure the province to begin offering abortion services. He personally lent his political clout to help reelect PEI’s pro-abortion Liberal leader Wade MacLauchlan in 2015, whom he said would “make sure” that abortion came to the island.

In the last 12 months, Trudeau has forced Canadian taxpayers into increased funding for abortions in developing countries.

Last May he reversed a policy from the previous Conservative government that forbade foreign aid money from being used to fund abortions overseas. Two months ago he pledged $650 million to help developing countries “address gaps in sexual and reproductive health” and help women gain “legal control over their bodies and reproductive health.”

Trudeau’s pro-abortion activism has mobilized pro-lifers across the country to rally behind candidates in the upcoming Conservative leadership election who have promised to defend life.

Campaign Life Coalition (CLC), the political arm of the country’s pro-life movement, has endorsed two of the thirteen candidates for their pro-life convictions and track record. CLC is asking its grassroots supporters who have memberships in the Conservative Party to mark down their votes for former MP Pierre Lemieux and current Saskatchewan MP Brad Trost.

Jim Hughes, CLC president, told LifeSiteNews in a recent interview that pro-life Canadians are “tremendously fortunate” to have pro-life candidates in the leadership race.

He noted that of the three major parties in the country, the Conservative Party remains the only one that still allows pro-life candidates to run and permits free votes on matters of conscience.

Both Lemieux and Trost addressed pro-lifers at the March for Life today, encouraging them in their fight on behalf of the pre-born.

He urged pro-lifers to join the Conservative Party. “In this race you need to be politically engaged in order to stand for life in all of its aspects.”

MP Trost told the marchers that Paul’s Letter to the Corinthians, in which he speaks of faith, hope, and love applies to the marchers.

The bill was struck down by the Supreme Court in its 1988 Morgentaler decision, and Canada has been without a law on abortion since then. All this has resulted in the deaths of about 100,000 babies annually by abortion, or what works out to about 3.5 million since 1969.