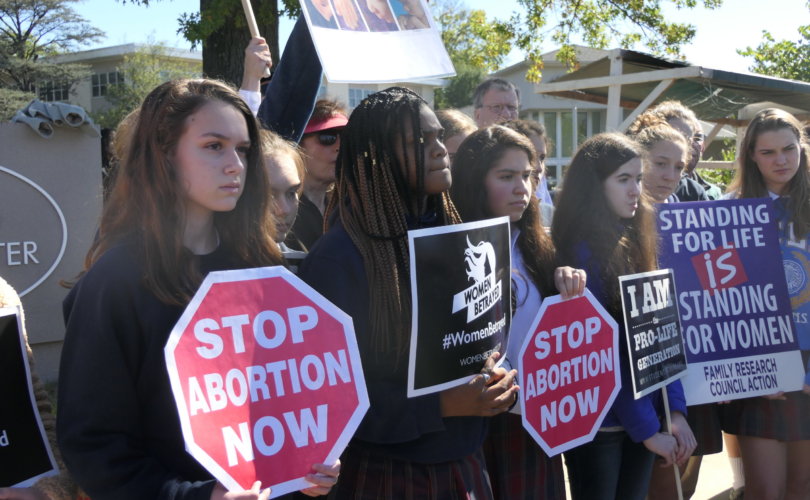 BETHESDA, Maryland, October 17, 2017 (LifeSiteNews) – A late-term abortionist cancelled all abortions scheduled for today in his new, illegal facility, pro-life advocates announced as they protested in front of it.

LeRoy Carhart is one of the most well-known late-term abortionists in the U.S. Until recently he operated two abortion facilities: one in Bellevue, Nebraska and one in Germantown, Maryland.

At the Germantown location, Carhart committed abortions on babies through all nine months of pregnancy. Pro-lifers were overjoyed to learn at the end of this summer that the Maryland Coalition for Life successfully purchased the building in which Germantown Reproductive Health Services was located, shutting Carhart’s business down.

Operation Rescue then learned Carhart purchased a new facility in Bethesda, Maryland, a wealthy suburb just outside Washington, D.C. Despite advertising late-term abortions, Carhart is not licensed to commit them at this location.

“We have successfully prevented Carhart from opening his illegal abortion facility in Bethesda today as planned, but we have only won the first round of what we expect will be a tough fight to protect babies and their mothers from Carhart's shoddy abortion practices,” said Troy Newman, President of Operation Rescue. “We pray this facility is never allowed to open.”

Operation Rescue has already filed complaints against Carhart’s new business, which is operating under the name AbortionClinics.org, Inc.

“There is no doubt that Carhart believes he can break the law without consequences. This time, he tried to pull a fast one and got caught,” said Newman. “We call on the Department of Health to permanently shut down his illegal abortion business. His attempt to conduct late-term abortions illegally is so egregious that we urge the Medical Board to revoke Carhart's Maryland medical license permanently.”

Among the protesters were Bethesda locals, Maryland pro-life activists who have experience sidewalk counseling outside Carhart’s old Germantown center, and students from Brookewood School in Kensington.

“In the seven years of conducting late-term abortions at his former facility in Germantown, at least ten women were rushed to hospital emergency rooms by ambulance, suffering from life-threatening complications as a result of the risky abortion procedures he performed on them,” Arina Grossu, director of the Family Research Council’s Center for Human Dignity, said at the protest.

Jennifer Morbelli, a 29-year-old teacher, died from complications after Carhart committed a late-term abortion on her.

“Currently, commercial livestock in a slaughterhouse and animals in a laboratory have more legal protection from pain than do unborn children,” said Grossu, noting that many of the babies Carhart aborts can feel pain as they are torn apart.

Albert Stecklein, whose daughter attends Walter Johnson High School, said he was “stunned” when he learned the late-term abortion facility was opening in his neighborhood.

“Only three weeks ago the effort to shut [Carhart] down and get him to leave [Germantown] was successful,” Stecklein told LifeSiteNews. He protested outside Carhart’s Germantown facility “for about six years every Monday.”

Pro-lifers are dismayed “to find out he’s coming back so soon,” said Stecklein.

Maryland pro-life advocates say they will hold a prayer vigil outside the Bethesda abortion center every Tuesday night, and continue monitoring Carhart to see if he commits any illegal abortions.