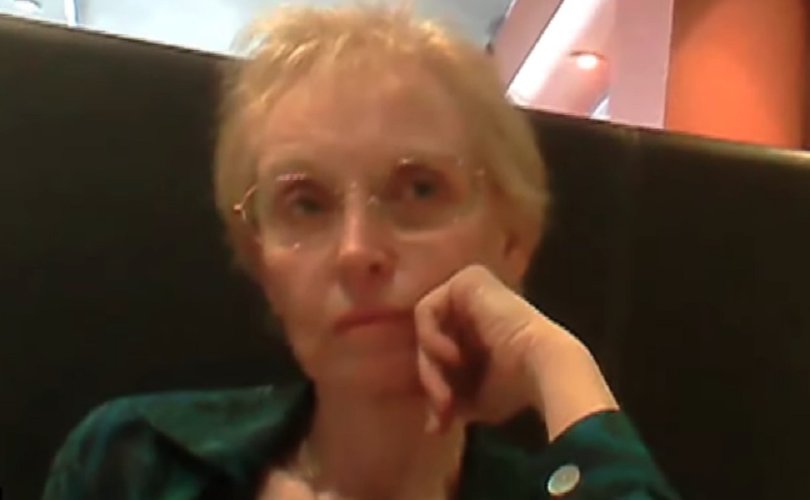 SAN FRANCISCO, California, October 21, 2019 (LifeSiteNews) — A former Planned Parenthood executive caught on tape haggling over the price of aborted baby parts with undercover pro-life journalists David Daleiden and Sandra Merritt claims she wasn’t trying to negotiate higher prices in exchange for fetal remains, but was only “joking” about profiting off them.

It is currently illegal to traffic in the sale of aborted babies.

Dr. Mary Gatter made the remarks under sworn testimony in a San Francisco courtroom last Monday as part of a civil case brought against Daleiden and Merritt, who were posing as employees of a fictitious company called Biomax. The pair face multiple felony counts and could be thrown in jail if convicted by the jury.

Gatter asserts that she wasn’t being serious. However, video of the conversation she had with Daleiden and Merritt indicates that she was worried about not getting similar rates of “compensation” to what other Planned Parenthood offices in California were receiving at the time.

The tape (see below) shows Gatter discussing the possibility of receiving $50, $75, or $100 for “each specimen” while laughing about purchasing a Lamborghini with the money she would make. She also admits to being open to asking an abortionist to modify the procedure so the fetus wouldn’t be as damaged.

“We don’t want to be in a position of being accused of selling tissue and stuff like that,” she states. “On the other hand, there are costs associated with the use of our space, and all that kind of stuff…if [this price] is in the ballpark, then its fine. If it’s still low, then we can bump it up.”

Federal law requires that no alteration in the timing or method of abortion be done for the purposes of fetal tissue collection (42 USC 289g-1). The sale or purchase of human fetal tissue is a federal felony, punishable by up to 10 years in prison or a fine of up to $500,000 (42 USC 289g-2). U.S. district judge William Orrick, who has ties to the abortion industry, has thus far not allowed the incriminating tape of Gatter to be aired in the courtroom.

During cross-examination last Monday, Horatio Mihit of the Liberty Counsel repeatedly asked Gatter if she negotiated the price of aborted baby remains. However, Planned Parenthood’s attorneys objected, and Orrick sided with them, thus relieving Gatter of the obligation to respond.

Gatter, a former medical director at Planned Parenthood, testified that she assumed that the meal she had scheduled with Daleiden and Merritt was going to be “a professional meeting” where they would attempt to “establish a relationship with Planned Parenthood Pasadena in order to provide tissue…for research purposes” in order to “cure a whole variety of diseases.”

Gatter also claimed that Daleiden and Merritt left out parts of their conversation in their video that showed she was “definitive” about her opposition to “accept[ing] any compensation over and above our expenses.”

“The question again, Dr. Gatter, was: As far as you know, there was no outside auditor ever hired by PPLA to determine what the correct cost per specimen would be to prevent any type of profit?”

She responded by saying, “Correct. We figured it out informally. And just as I was leaving, we were attempting to get a more formal designation. But, yes.”

“Are you aware that PPFA said if you’re going to engage in a tissue donation program, if that’s what you want to call it, that you should have an outside auditor involved to determine what the correct price would be? Were you aware of that?”

Planned Parenthood lawyer Amy Bomse then objected, and Gatter did not answer the question.

LiMandri also asked Gatter, “You also volunteered on direct examination that in the course of that discussion with the Biomax representatives during the lunch, that you made it clear that you only wanted to recover expenses and not make a profit. Do you recall that testimony on direct?”

“Okay. But in that same conversation, in which you say you were joking about wanting a Lamborghini, you also said you didn’t want to make the first offer because a person who makes the first offer is also at a disadvantage. Do you remember that?”

At that moment, LiMandri asked Judge Orrick if it would be permissible to show the video in the courtroom, to which he responded, “No, it would not.”

Planned Parenthood Federation of America brought the suit against Daleiden after his Center for Medical Progress released undercover videos in 2015 exposing the abortion giant’s trafficking in aborted baby body parts. The trial began October 2 and will continue until at least November 8.