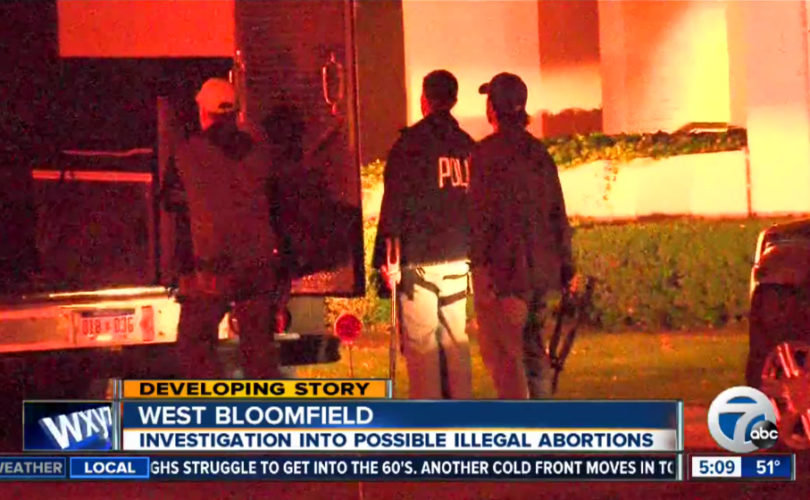 WEST BLOOMFIELD, MI, October 15, 2015 (LifeSiteNews) — Over the past 17 years, notorious abortionist Michael Arthur Roth has been found negligent and incompetent by the state of Michigan, which has fined him, suspended his license, and put him on probation. Now, in a bizarre and macabre twist, he has been accused of committing abortions out of the trunk of his car.

Michigan State Police raided Roth's waterfront home on Orchard Lake Road in the posh suburb of West Bloomfield on Tuesday, following “a gruesome discovery” of 14 plastic jars of “human tissue,” which police said was “possibly fetuses,” in his truck after a car accident two weeks ago. At the time of the accident, Roth's trunk also contained medical equipment used for abortions, and large amounts of Fentanyl, a sedative used on women undergoing abortion to relieve pain.

In 2004, Michigan's Attorney General found him negligent and incompetent for committing abortions twice in a bartender's home, for which he was fined and his license was suspended. A stipulation of his probation was that he never perform an abortion outside a medical facility. In 2012, he was fined again.

With the new discovery of Gosnell-esque evidence after a car accident, the Attorney General is again investigating Roth.

“Michael Arthur Roth has a history of this behavior,” she said. “If what is being reported in the news is fact, I don't know how the State of Michigan isn't summarily suspending Roth's license today for the protection of the public and his patients.”

“How bad does bad have to be for this government to protect its people?” Mills asked.

Two weeks ago, Roth hit a special needs child, causing the child critical injuries. His car was impounded while police sought the car's data recorder, and then they discovered the Fentanyl inside Roth's vehicle, and the unlabeled body parts and medical equipment in his trunk. The containers were taken to the Oakland County Medical Examiner's Office.

Monica Migliorino Miller of Citizens for a Pro-Life Society commented, “That Michael Roth would be performing illegal abortions – either in his home, or in the homes of women – shows the despicable, sordid practice that is abortion.” Miller continued, “It also shows that Roth as an abortionist did not really care about the health and safety of women – as these abortions were not taking place in sterile environments.”

Miller concluded, “This is just another sad, sorry story that exposes the dark world of the abortion [industry]… On top of the scandal of Planned Parenthood selling the body parts of aborted babies – and now this! We see the unscrupulous nature of the abortion practitioner – a nature forged in disrespect for life.”

Ed Rivet, Legislative Director for Michigan Right to Life (MRTL), agrees. “Abortionists frequently violate our laws with extreme disregard for women's health and safety,” he said. “Roth should have his license revoked, just like Dr. Robert Alexander who ran a house of horrors abortion clinic in Muskegon until 2014.”

In an emailed press release, Michigan Right to Life noted, “The abortion industry's long history of contempt for women's health, standards of care and state regulations shows that they cannot be trusted to regulate themselves.”

Since Michigan’s Prolife Omnibus Act passed in 2012, significantly strengthening oversight of the abortion industry, 16 abortion facilities have closed, many due to substandard practices that endanger the life and health of women.

MRTL President Barbara Listing said, “If abortionists and their businesses can't abide by laws and regulations that others follow, they shouldn't be allowed to practice on vulnerable women.”

Roth has not been charged, and remains free and at large.

Why was a Michigan abortion business evicted for the second time this year?