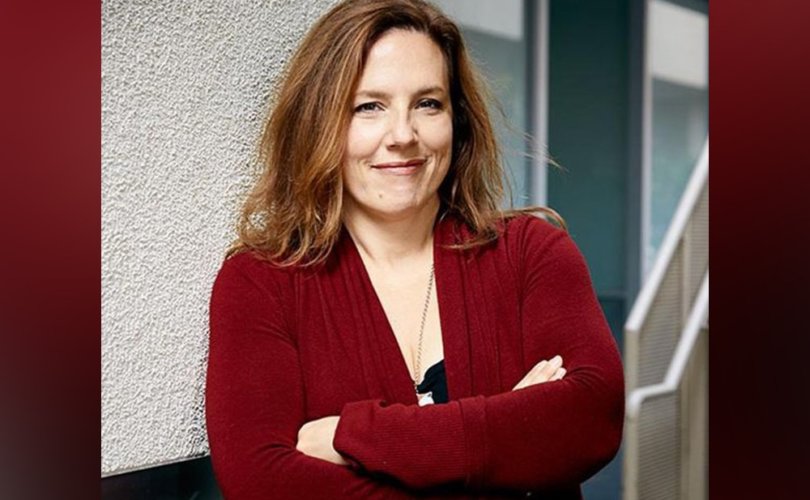 SAN FRANCISCO, California, April 4, 2019 (LifeSiteNews) – An abortionist with ties to Planned Parenthood who is named “Doe 7” to protect her identity in the court case against pro-life undercover journalist David Daleiden was filmed publicly discussing her connection to the lawsuit recently, admitting that she has not had “any personal threat to my safety.”

Debbie Bamberger, identified in court documents as one of the 14 “secret” accusers in the case against David Daleiden and Sandra Merritt, made the candid remarks during a “free admission” event at a Jewish library in San Francisco last month that included a panel discussion about abortion and Judaism.

“There was a famous case that's being tried right now against this man named David Daleiden who videotaped a bunch of conversations and then edited them to sound quite bad—about what Planned Parenthood does with pregnancy…products of conception—fetal parts—after an abortion,” she told her audience.

“So I was caught on tape by this guy. He infiltrated an abortion provider meeting. It was a place where we all feel very safe so it was a huge betrayal that this happened,” she added.

Bamberger, a non-physician surgical abortion provider for Planned Parenthood Northern California, was one of the 14 persons Daleiden recorded discussing the illegal sale of aborted baby parts during the National Abortion Federation’s (NAF) annual 2014 and 2015 meetings. LifeSite published her name as well as the other 13 abortion workers who appeared in the gruesome videos in a February 9 report.

The 51-year-old Bamberger went on to say that she hasn’t had “any personal threat to my safety. I am listed on a very icky abortion site that lists ‘abortionists’ and gives my address and stuff like that. But luckily I haven't had any badness come at me personally. But it is real and it is scary.”

Bamberger’s claim that Daleiden “edited” the conversations he had so the abortionists appearing in the videos would “sound quite bad” is misleading. A decision by the U.S. Fifth Circuit Court of Appeals in January 2019 found that the videos were, in fact, not deceptively edited. Former Planned Parenthood President Cecile Richards also conceded in October 2016 that the videos “do hurt” Planned Parenthood's reputation.

Bamberger’s commenting freely and openly about the case in a public setting while admitting she has been safe from threats contradicts claims made by the judges overseeing Daleiden’s lawsuits. The judges have said that the abortion providers who were filmed undercover are really victims who fear for their lives and who must have their identities kept secret during court proceedings.

Judge William Orrick III is presiding over the two civil cases brought against Daleiden’s Center for Medical Progress (CMP) by Planned Parenthood (PP) and the National Abortion Federation (NAF). California Superior Court Judge Christopher Hite is presiding over the 15-count felony prosecution against Daleiden and co-defendant Sandra Merritt by the State of California.

In 2016, Judge Orrick barred Daleiden from releasing the stomach-churning videos to the public because he claimed it was necessary to protect the abortionists seen in them from threats and harassment, especially from pro-lifers.

Daleiden and 20 state Attorney General's asked, unsuccessfully, the Supreme Court to overturn Orrick's decision so the videos could be released. The CMP also petitioned for Orrick to recuse himself from the case due to having been a board member of a NAF organization that partners with Planned Parenthood, but the request was not successful.

Judge Hite similarly ruled in February 2019 that the names of those who appeared in the videos will remain sealed during the upcoming hearings for Daleiden’s court case against the State of California beginning April 22 at the Superior Court of San Francisco. In effect, the 14 “secret” accusers in the lawsuit brought against Daleiden and Sandra Merritt will be referred to as “Doe 1, Doe 2, Doe 3, etc.” during the proceedings, although their names have been publicly available since 2017.

According to the San Francisco Examiner, Judge Hite made his decision after California Deputy Attorney General Johnette Jauron said if the names of the employees were public, their safety could be put into jeopardy.

But Bamberger’s public remarks about the case and her well being seem to suggest her safety has not been put into jeopardy or that she is worried it will be given that she publicly revealed she is one of the subjects of Daleiden's undercover videos and connected to the case.

Terrisa Bukonivac, the Founder and Executive Director of Pro-Life San Francisco, told LifeSiteNews in an email that the arguments being used to seal the names of the persons in the videos are outrageous.

“The attorney general of California is relying on a demonstrably blatant lie to aggressively silence and unjustly prosecute David and Sandra. The ‘Does’ aren’t afraid, they are proud! The court’s effort to suppress their names is completely unjustified.”

Bukonivac previously told conservative magazine National Review that the “Does” have “made their own identities known by speaking publicly about the case and their own involvement.”

Horatio Mihet, a member of Merrit’s legal team, accused Jauron of having ulterior motives in wanting the names and the videos sealed during court proceedings.

“The only reason the attorney general wants to have these videos sealed and kept from the public eye is because the videos themselves provide damning evidence that these allegedly confidential conversations were not in fact confidential,” he said.

Daleiden’s attornies have long maintained that the ban on the videos has hampered their efforts and that the videos should be made public not only so they can mount a fair, effective defense of their client but so the “illegal and unethical” practices of the NAF can be exposed for all to see.

LifeSite will be on the ground reporting on the case from San Francisco April 22 – May 4. Videos recorded by Daleiden will be shown inside the courtroom at that time.