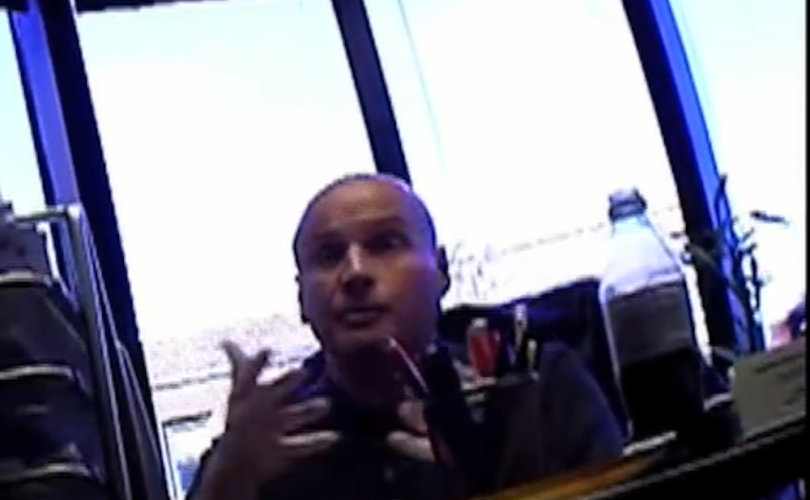 WASHINGTON, D.C., (LifeSiteNews) — Cesare Santangelo, the abortionist at the D.C. mill where “extremely late-term” babies recently recovered by pro-lifers prompted calls for an investigation into potential legal violations,  previously admitted he would not save a baby born alive.

A video recorded in 2013 by a Live Action undercover investigator is being revived online due to its potential implications in the deaths of five babies recovered from Santangelo’s Washington Surgi-Clinic facility on March 25. A former abortionist told Live Action News that one of the babies might have been killed during an illegal partial-birth abortion and another, still in his or her amniotic sac, may have been born alive.

In a conversation recorded in 2013, Santangelo sparked an outcry after Live Action released his admission that, contrary to the law, he would not save a baby born alive. When a 24-week pregnant undercover journalist asked him what would happen if her baby survived outside the womb after an abortion attempt, he responded:

“Technically – you know, legally we would be obligated to help it, you know, to survive.  But, you know, it probably wouldn’t. It’s all in how vigorously you do things to help a fetus survive at this point …  Let’s say you went into labor, the membranes ruptured, and you delivered before we got to the termination part of the procedure here, you know?

“Then we would do things – we would – we would not help it. We wouldn’t intubate. It would be, you know, uh, a person, a terminal person in the hospital, let’s say, that had cancer, you know? You wouldn’t do any extra procedures to help that person survive. Like ‘do not resuscitate’ orders. We would do the same things here.”

After Santangelo’s admission that he would engage in illegal acts by leaving born-alive babies to die, Live Action president and founder Lila Rose called for then-Attorney General Eric Holder and the U.S. Attorney’s office, as well as local law enforcement, to investigate and prosecute Dr. Santangelo.

After the eye-opening statements from Santangelo were released, Rose gathered with pro-life leaders from around the country at his office in Washington, D.C., to demand the district shut the facility down.

One of the pro-lifers who recently helped recover the late-term babies from Santangelo’s facility, ​​Terrisa Bukovinac, explained in an interview with LifeSiteNews that they also “know from undercover footage that’s been released by Live Action” that Santangelo “does not use feticide when doing abortions. That means that the likelihood of a late-term baby being born alive is extremely high … ”

“We knew right away that there was evidence here of federal crimes, like [against] the Born-Alive Infant Protection Act. Also, one of the late-term babies seemed very obviously a victim of partial-birth abortion, and so we were concerned from that moment on [about] preserving this evidence and of attempting to get justice for them, and to hopefully bring accountability to Santangelo.”

In light of the refusal of the D.C. police to investigate potential violations of federal law, Republican lawmakers wrote a letter to the Department of Justice and Washington, D.C. Mayor Muriel Bowser “demand[ing] that a thorough investigation is conducted into the death of each child” recovered by Lauren Handy and Bukovinac.

The legislators added that “in order to accomplish such [an] investigation, we request and fully expect the city to preserve all of the children’s remains as evidence and conduct autopsies.”

The legislators acknowledged possible violations of both the Partial-Birth Abortion Ban Act of 2003 and the Born Alive Infants Protection Act, noting that “one baby girl has significant damage to her head, with deep lacerations at the back of the neck, and may have been victim of an illegal partial birth abortion,” and that “another baby was found in its amniotic sac and could have been born alive,” but that without an autopsy, they cannot ascertain how “each child died.”

A spokesperson for Republican U.S. Sen. Steve Daines of Montana, one of the letter’s signers, confirmed to Catholic News Agency (CNA) on April 7 that the lawmakers have not yet received a response to the letter.

“The Senator is not surprised they haven’t gotten a response back from Mayor Bowser, Chief Contee or Attorney General Garland but will keep up pressure to ensure justice is delivered,” the spokesperson told CNA. “Unfortunately, it may take the Republicans winning back Congress before there could be any committee action, but Senator Daines would be supportive of any investigation or hearing looking into these horrific deaths.”