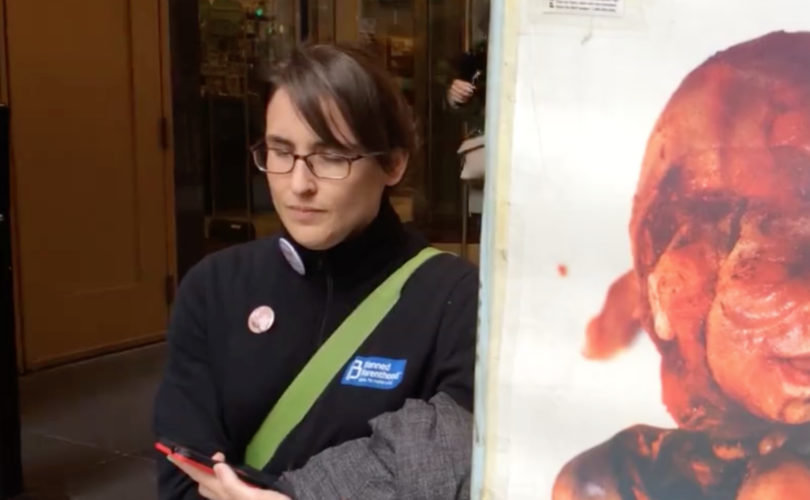 CHICAGO, November 24, 2015 (LifeSiteNews) – Pro-lifers are well-known for praying for abortion promoters, profiteers, and even abortionists. Last week, a very special prayer request went out to pro-lifers for one particular abortionist, who left a Planned Parenthood conference to kneel and pray.

We couldn't believe it when an abortionist came out of a Planned Parenthood conference, knelt down on the sidewalk by an abortion victim photo and began to pray.You won't believe what she had to say!

Out of the blue, a conference participant left the conference, went outside to where pro-lifers were holding signs with pictures of aborted babies, knelt down on the public sidewalk, and began speaking. “My dear heavenly Father, I'm grateful today to be here at this wonderful meeting,” she began.

“I want to express to you the gratitude and humility that I feel as an abortionist,” she continued.

Remaining on her knees with her eyes closed, she then listed pro-abortion arguments against pro-lifers. “I can imagine no person who is in greater need of Christlike love and excellent medical care than a woman who is faced with an untenable pregnancy,” she said. “And I'm grateful every day to feel thy spirit and thy guiding hand in my work.”

“I'm so grateful to have been able to spend the last few days communing with those who share my faith and my passion,” the woman said. “Even though I don't have an organized faith community to support me, I have the support of the world, and the support of thy spirit every day.”

Her kneeling comments noted that as an abortionist, she has the humility not to judge her patients. Rather, she gives them “care and compassion … and provide[s] them the love of Christ.”

The abortionist emphasized that she is “incapable of judging anyone else's heart and mind,” referring to women's motives for aborting their children. She then judged pro-lifers, whom she characterized as “those that in their pride fail to have compassion and truly live the example of Christ and to love all, and to reserve judgment and to humble themselves before thee.”

“I would hope that you would soften their hearts,” she said, referring to pro-lifers, “and help them to see the cruelty and the damage that their actions lead to.”

Referring to her participation in abortions, the woman expressed gratitude “that I am able to participate in that … and to use this in furthering the work of the Lord.”

“I say this in the name of Jesus Christ. Amen,” the abortionist concluded.

“I've been organizing pro-life street protests for over eight years, and I don't know if I've ever seen anything as strange as the abortionist praying on a public sidewalk,” Matt Yonke wrote on the PLAL website.

The Pro-Life Action League posted on Facebook, “We couldn't believe it when an abortionist came out of a Planned Parenthood conference, knelt down on the sidewalk by an abortion victim photo and began to pray.”

Dr. Monica Miller of Madonna University commented on Facebook, “She utters her thanks for being able to kill babies right next to a poster of a baby ravaged by abortion.” The founder and director of Citizens for a Pro-Life Society continued, “Then she also prays for pro-lifers that we would be helped by God to see 'their cruelty and their damage' – and yet she is utterly blind to the real cruelty and damage of abortion.”

“From the content of her prayer, it's clear that she has some knowledge of Jesus,” Yonke continued, “and we all need to pray that whatever seed of faith she has will be nurtured and grow until she can see the injustice she is committing against her unborn brothers and sisters.”

“As strange and contradictory as her prayer may have been, I hope that what we as pro-lifers could learn from it is to pray for our opposition without impugning their motives or pretending we can read their hearts,” Yonke concluded, “which, as this abortionist correctly pointed out, we cannot know.”

“Let us strive to see our own faults when we pray, and be sure that our prayers, even for our worst enemies, are for their conversion and salvation, never for judgment or condemnation.”

Daniel Murphy and Slate: praying for folks who think badly of us