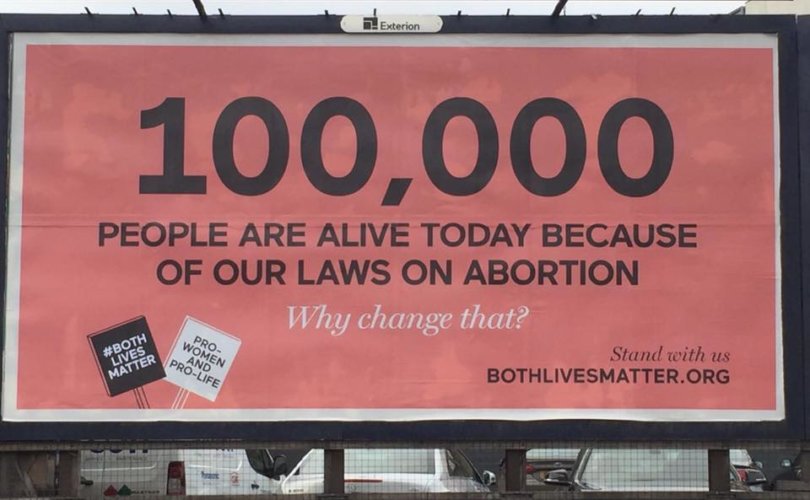 December 20, 2017 (SPUC) – Both Lives Matter, a pro-life group based in Northern Ireland, have won a UK-wide award for its campaigning work. The organisation won the Northern Ireland Public Affairs Campaign of the Year, for their '100,000' billboard campaign, which referred to the 100,000 lives that have been saved because the 1967 Abortion Act was not extended to Northern Ireland. The honour was awarded at the annual Public Affairs Awards in London last week, which was presented by Vuelio and hosted by the Public Relations and Communications Association.

Despite bpas themselves being nominated for its campaign to reduce the price of the morning-after pill, abortion providers were not happy that a pro-life group being included in the awards. Representatives from bpas, the FPA, and the Abortion Support Network, among others, wrote to the Director General of the PRCA, Francis Ingham, saying that by recognising Both Lives Matter's campaign in a Public Affairs award, the association was “providing an endorsement for the denial of healthcare and human rights.”

The letter concluded with an intention to boycott the awards ceremony declaring, “bpas was delighted to have been shortlisted for our campaign to reduce the inflated price of emergency contraception,” it said, “but under the circumstances no longer wants recognition from an organisation which is also happy to celebrate the systematic suppression of the rights of women and girls to basic healthcare. Please accept this letter as notice of the withdrawal of our entry.”

However, Mr Ingham refused to be intimidated. He wrote back and explained that “the campaigning work that we have showcased and celebrated since the awards launched has covered numerous viewpoints on often controversial issues, as you would hope and expect from an awards ceremony of this type. It is for that reason that we would never ‘endorse’ any of the campaign viewpoints that are shortlisted. If we were to, then we would be endorsing multiple pieces of work that promote often directly competing aims -which would be absurd. Your own shortlisting at the same awards event as Both Lives Matter is clear evidence of our objective stance.”

In addition, he said, “the judges consider only the ingenuity and effectiveness of the campaigning work itself. For that reason, it is completely incorrect to claim that we are endorsing 'the denial of healthcare and human rights.'”

Mr Ingham also pointed out that Both Lives Matter operate in accordance with the laws of Northern Ireland, and so could not be excluded from an award, and said: “Whilst I appreciate that you disagree fundamentally with the work of Both Lives Matter, I would hope that you might consider that the Public Affairs Awards is recognising Both Lives Matter in the same spirit of democratic freedom within which that organisation may campaign as freely as organisations like bpas, FPA, Antenatal Results and Choices, Abortion Support Network, and Birthrights…I note with regret the withdrawal of your entry.”

Dawn McAvoy, co-founder of Both Lives Matter, told the Belfast Telegraph: “Both Lives Matter has always been about three things – reframing the abortion debate in Northern Ireland and beyond; advocating for better care and support in pregnancy crisis; and creating a culture which values every women and unborn child.

“We are stunned and delighted to have won best campaign in our first year,” she continued. “We are surprised and disappointed by the reaction of BPAS and others who have essentially put pressure on the organisers to have us excluded from the awards.  By withdrawing in protest, they have attempted to make the awards about them rather than a celebration of the great work by all the nominees.”