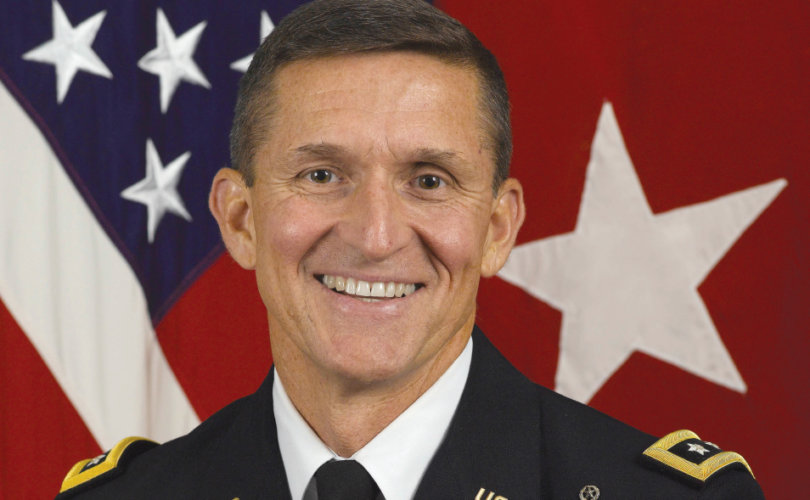 CLEVELAND, July 11, 2016 (LifeSiteNews) – A military leader being vetted as a possible running mate for Republican Donald Trump changed his views on abortion in just a little over 24 hours.

Lt. Gen. Michael Flynn (ret.) told ABC's “This Week” program on Sunday that he believes in the “right of choice” on abortion and that social issues like life or the definition of marriage “are not big issues that our country’s dealing with that will cause our country to collapse.”

Flynn is a registered Democrat who served President Obama.

“I think women have to be able to choose…because they’re the ones that are going to decide to bring up that child or not,” he said yesterday.

Now, Lt. Gen. Flynn has told Fox News that he is a “pro-life Democrat” whose “attended pro-life rallies with [his mother] as a boy.”

But he also had harsh words for voters who prize the right to life over every other issue: “If people are going to decide [the] election on [the] abortion issue, they should just stay home.”

Pro-life leaders said the general's performance on Sunday disqualified him to serve as vice president. But Flynn contacted Jen Griffith of the Fox News Channel, who detailed their conversation in a series of tweets:

EXCLUSIVE: LTG Mike Flynn tells me he is “a pro-life Democrat,” clarifies abortion comments by phone. “I believe the law should be changed.”

.@GenFlynn tells me “This pro-choice issue is a legal issue that should be decided by the courts. If people want to change the law, vote.

Mike Flynn tells me his mother was pro-Life, he attended pro-Life rallies with her as a boy and drove pro-life floats for her. @FoxNews

Mike Flynn tells me: “If people are going to decide election on abortion issue they should just stay home.” Says he is “pro-Life Democrat.”

.@GenFlynn tells me #abortion issue shd be decided in the courts. His priority: “national security.” “I believe the law should be changed.”

So far, reaction to the 33-year Army veteran's abrupt about-face has been largely negative.

“The tricky part for Flynn is in how social conservative voters would react if the GOP not only continued to do little about abortion but even stopped paying lip service to it as a presidential issue. Would that be taken by evangelicals as a final kiss off?” wrote the blogger who goes by the name AllahPundit at HotAir.com. “The nominee has to at least pretend that the base’s social concerns should matter in November, right? Putting Flynn on the ticket would be a bold test of that theory.”

“If a liberal Republican presidential nominee from New York selecting as a running mate a disgruntled former general, who once worked for his Democrat opponent, sounds familiar to you, it’s because it should,” he wrote. “It’s the exact plot of the current season of the popular television show 'House of Cards.' I’m sure it’s a coincidence.”

Is Trump considering this pro-abortion, pro-gay ‘marriage’ Democrat for VP?