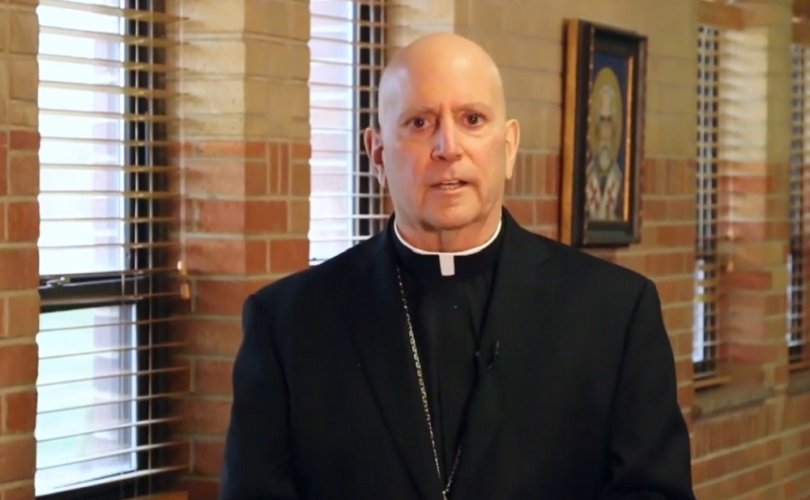 DENVER, Colorado, April 16, 2021 (LifeSiteNews) – Archbishop Samuel Aquila of Denver is the latest prelate to denounce giving Communion to pro-abortion politicians and other dissident Catholics who persist in grave sin.

He pointed to the First Letter to the Corinthians, in which St. Paul warns that anyone partaking of the Eucharist “in an unworthy manner will be guilty of profaning the body and blood of the Lord.”

“These words about the church’s love for those who dare to approach the altar are words of care and mercy, given to us by the Holy Spirit, for protection and healing,” Aquila wrote.

“But they offer a sobering warning: We who profess the faith of the church must live as the church commands us because through his church Jesus Christ calls us to repentance, forgiveness and holiness. To approach the Eucharist otherwise is to condemn ourselves at the altar of the Lord,” the archbishop chastened.

“This is true for every Catholic, but it is particularly relevant regarding the false witness that many public officials sometimes maintain relative to the most fundamental truths of the human person,” Aquila added.

Church teaching holds that public officials who promote abortion commit grievous sin and cannot be admitted to the Eucharist. Aquila pointed to similar provisions in canon law banning those in objective states of mortal sin from being given Holy Communion.

“The Eucharist is a gift, not an entitlement, and the sanctity of that gift is only diminished by unworthy reception,” he said. “Because of the public scandal caused, this is especially true in the case of public officials who persistently govern in violation of the natural law, particularly the pre-eminent issues of abortion and euthanasia, the taking of innocent life, as well as other actions that fail to uphold the church’s teaching regarding the dignity of life.”

Earlier this year, Aquila was one of more than a dozen American prelates who publicly endorsed a letter by USSCB president José Gomez published on Inauguration Day criticizing Joe Biden’s dissident, radical stances on abortion and sexuality.

“So, I must point out that our new President has pledged to pursue certain policies that would advance moral evils and threaten human life and dignity, most seriously in the areas of abortion, contraception, marriage, and gender,” Gomez wrote, reaffirming that abortion, in particular, is the “preeminent priority” of the U.S. bishops.

Since Biden took office just three months ago, his regime has mandated taxpayer funding for transgender surgeries, authorized the disbursing of abortion pills by mail, and backed graphic, pro-LGBT sexual education for children.

After the White House restored billions of dollars of federal abortion spending in January, Aquila retweeted a statement from the USSCB blasting the move as “antithetical to reason” and “incompatible with Catholic teaching.”

Naumann slammed Biden the following month in an interview with Catholic World Report, saying Biden “should stop defining himself as a devout Catholic” and should “not to present himself for Holy Communion.”

“When Catholics receive the Eucharist, they are acknowledging the Real Presence of Jesus, and also belief in the teachings of the Church,” Naumann said. “President Biden doesn’t believe in the Church’s teachings on the Sanctity of Human Life, and he should not put the priest in the situation where he has to decide whether or not to allow him to receive the Eucharist.”

Biden continues to attend Mass and receive Communion in the Archdiocese of Washington with explicit approval from scandal-plagued, highly problematic Cardinal Wilton Gregory.

“While it is likely that many — too many — receive the Eucharist in a state that is objectively separated from God, there is an added obligation on public officials who openly and persistently live in a state of grave sin,” Aquila stressed in his op-ed on Wednesday.

“Their example leads others into sin and compounds the risk of condemnation that may come their way when they stand before God. If the church truly loves them, as she does, then it is more than appropriate to call them back to an intimate relationship with each person of the Trinity through repentance before receiving the body and blood of Jesus in a way that endangers their eternal salvation,” he said.

“Church law and love are not mutually exclusive,” he added.

Aquila also chastised his fellow bishops and warned them of “the condemnation that falls on us if we fail to love those who do not want to hear the truths of our faith.”

“I am afraid that many baptized Catholics do not take the Eucharist seriously because they do not take sin seriously, and this is largely the fault of bad catechesis overseen by me and my brother bishops for far too long,” he said. “Today, we often hear of the primacy of conscience in a person’s decision around the Eucharist,” he continued, likely referring to positions taken by Pope Francis, as in his error-filled Apostolic Exhortation Amoris Laetitia, and other dissident prelates.

“Yet, conscience does not excuse any decision simply because a person makes a personal judgment about good and evil. There is a prior obligation that the conscience be properly formed, so that good and evil can be properly discerned. A well-formed conscience submits the person’s heart, will and mind to the will of our loving Father,” Aquila said.

“Trading ‘civility’ and ‘engagement’ for eternal life is not a good trade, and it is especially negligent for me, as a bishop, to remain quiet when people I am called to love may be endangering their eternal souls,” the archbishop warned. “What fills our churches is not a soft-pedaling of the Gospel but deep, authentic belief in Jesus rooted in our personal love for him as our Lord and savior.”