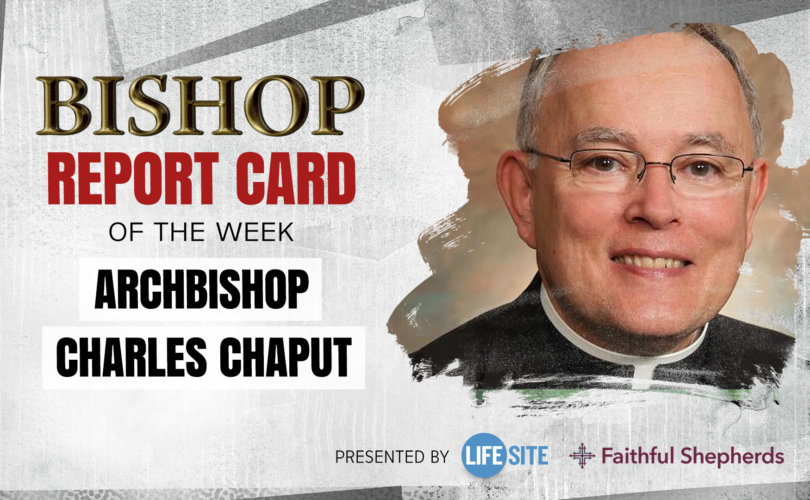 September 6, 2019 (LifeSiteNews) — Archbishop Charles Chaput is this week’s Bishop of the Week for Faithful Shepherds, a site launched by LifeSiteNews in August of 2018 to hold bishops accountable and to encourage them to be faithful to the perennial teachings of the Church.

When Chaput was only 44 years old, he was elevated to Bishop of Rapid City, S.D. in 1988. In 1997, he was appointed as archbishop of Denver. He currently serves in one of the largest sees in the country, the Archdiocese of Philadelphia, where he was appointed by Pope Benedict XVI in 2011.

Learn more about Archbishop Chaput’s past actions and sign up for the Faithful Shepherds newsletter. Click here

In July 2016, just two months after the release of Amoris Laetitia, Chaput issued diocesan guidelines that stated that divorced and civilly remarried Catholics cannot receive Communion unless they “refrain from sexual intimacy.” Allowing such persons to receive Holy Communion “misleads people about the nature of the Eucharist and the Church,” Chaput wrote.

His Excellency has also been a strong defender of the Church’s teaching on contraception. In 1998, on the 30th anniversary of Humanae Vitae, Chaput affirmed that Pope Paul VI was right about both “the consequences deriving from contraception” and “contraception itself.” More recently, Chaput personally added his name to the “Humanae Vitae at 50 Declaration.” This declaration, organized by laity in the Archdiocese of Philadelphia, expresses support for Humanae Vitae’s teachings on contraception and human life and offers commitment “to the fullness of its truth and natural beauty.”

In addition to rejecting artificial contraception, Chaput has worked extensively to help restore the culture through pro-family actions. While archbishop of Denver, Chaput became the first U.S. archbishop to require engaged couples to complete an entire Natural Family Planning course as part of their marriage preparation. In 2017, Archbishop Chaput was a featured speaker at the Napa Institute conference where he bluntly stated how young people can change the world: “love each other, get married, stay faithful to one another, have lots of children, and raise those children to be men and women of Christian character.”

Learn more about Archbishop Chaput’s past actions and sign up for the Faithful Shepherds newsletter. Click here

Chaput published a column in 2017 that rejected many of the ideas put forth in Fr. James Martin’s pro-gay book, Building a Bridge. Chaput wrote that “Jesus didn’t come to affirm us in our sins and destructive behaviors — whatever they might be — but to redeem us.” However, he did not stop Fr. Martin from speaking at a gay-friendly parish in his diocese. Also, he said the term “intrinsically disordered” is “language [that] automatically sets people off, and probably isn’t useful anymore.” At the same time, he said any substitute terminology should not obscure the Church’s view that “same-sex attraction is not part of God’s plan.”

Chaput has issued new diocesan guidelines that state that “under no circumstances” may priests and deacons in the Archdiocese of Philadelphia “take part in, witness or officiate at any civil union for same-sex persons.” Chaput continued by stating that “there is no truth, no real mercy, and no authentic compassion in blessing a course of action that leads a person away from God.”

If you would like to send Archbishop Chaput a postcard or learn more about his past actions, please visit FaithfulShepherds.com.