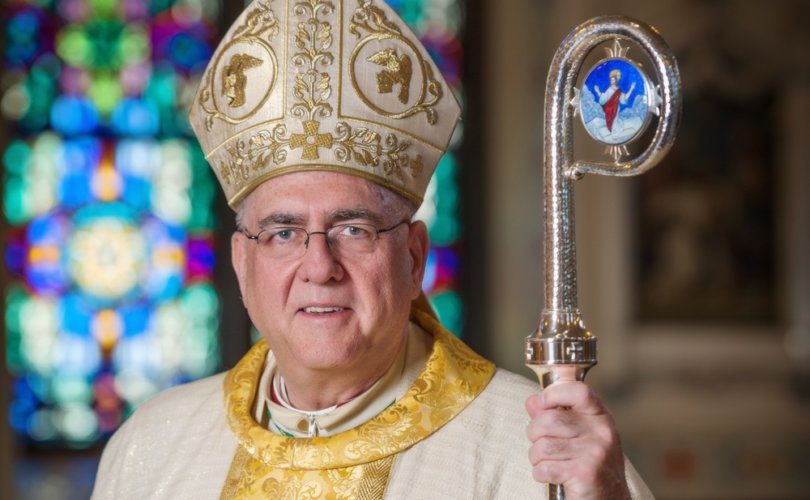 (LifeSiteNews) — The former chair of the U.S. bishops’ pro-life committee, Archbishop Joseph Naumann, has criticized Pope Francis’ support of pro-abortion politicians as “doing exactly what he warns others not to do.”

Speaking to German newspaper Die Tagespost in an interview released July 13 but conducted earlier this month, Archbishop Naumann of Kansas City addressed the issue of abortion and Catholic politicians, noting also that “many” baptized Catholics  are “not really part of the Church.”

Such people are “shaped by culture and society” instead of Catholic teaching, he said, as “even within the Church, Catholics are often more influenced by secular media than by the Church itself.”

Turning to the subject of self-professed Catholic Joe Biden, Archbishop Naumann repeated his prior criticism of the president, saying that while Biden “claims to be a devout Catholic … it’s not really clear from his actions.”

Biden’s use of the “rosary and his Mass attendance” Naumann described as political tools. The archbishop said the American president “followed the Democrat line, not the teaching of the Church.”

The staunchly pro-abortion Biden responded to the recent overturning of Roe v. Wade by signing an executive order promoting abortion on demand last Friday. Archbishop Naumann said in response that the president “has gone to extremes,” and that he himself is “concerned about how many people he is misleading with this.”

“His bishop is responsible for that decision. But Joe Biden knows what is right in this regard,” said Naumann.

There is no excuse. He should not keep presenting himself as a devout Catholic. By doing so, he is claiming the role of bishops for himself. And he’s teaching people: I support legal abortions and I’m a devout Catholic at the same time, so you can too. Politicians cross a line when they flaunt their Catholic faith and advocate such evil.

Asked about U.S. Speaker of the House of Representatives Nancy Pelosi, and her recent reception of Holy Communion at a Papal Mass on June 29, Naumann criticized Pope Francis.

“It’s sad how he behaved toward both President Biden and Nancy Pelosi,” he said.

Pope Francis recently defended his decision to allow Pelosi to receive Communion by appealing to a need to be “pastoral.” But Naumann disagreed with this stance, saying that “it is not pastoral to tell someone that he is a good Catholic and can receive communion as a matter of course when that person has committed a grave evil.”

Pope Francis does not understand the U.S. “any more than he understands the Church in the U.S.,” Naumann declared. This was due to the papal advisors and “the people around him,” who “have completely misinformed him on that.”

The fact that the Pope received Pelosi was politically exploited. In doing so, Francis is doing exactly what he warns others not to do.

In subsequent comments to CNA Deutsch, Naumann clarified that his interview with Die Tagespost was conducted prior to comments made by Pope Francis in an interview this week in which he called Biden’s stance on abortion an “incoherence.” Speaking to the Spanish TV network Univision in an interview segment released July 12, Francis released his strongest comments on Biden’s support for abortion to date.

However, the Pontiff did not take an authoritative stance on the issue, saying he “leaves it” to Biden’s “conscience” and “let him talk to his pastor about this incoherence.”

Pope Francis & Abp. Naumann are right that Pres. Biden is incoherent in professing to be a devout Catholic & supporting abortion. He even said “abort a child.” Christians have championed the vulnerable from day one to today. Catholic leaders in public office should do likewise. https://t.co/mZYUEVyCdS

Cordileone recently banned Pelosi from presenting herself for Holy Communion due to her public, continued support for abortion. Despite this, Pelosi continued to receive Holy Communion at public Masses since Cordileone’s declaration, notably at the Vatican on June 29.

Archbishop Joseph F Naumann is a friend of mine. I worked for him for many years. I know him to be just, righteous, orthodox, a man of faith, and fiercely committed to life! I pray for him daily. While not perfect, (in these times, who of us is?) He is one of the good ones.

Naumann doubled down on his assessment of Pope Francis’ understanding of America, saying that contrary to the headlines the U.S. bishops “ have paid great respect to Pope Francis” and “have mostly applauded his actions and what he advocates.”

“Otherwise, again, I think the pope has been ill-informed in many ways,” he added.