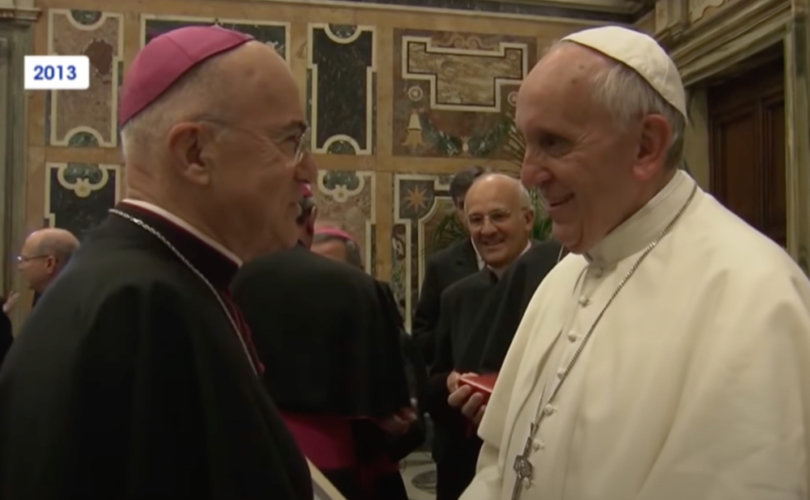 (LifeSiteNews) – In a new interview, former U.S. Papal Nuncio Archbishop Carlo Maria Viganò spoke of the need “to shed light on the abdication of Benedict XVI” and called for an “investigation” into potential “manipulation of the 2013 Conclave.”

Archbishop Viganò’s comments came in a wide-ranging interview conducted with veteran Vatican journalist, Aldo Maria Valli, released April 5 and later reprinted on LifeSiteNews. The former nuncio discussed, amongst other topics, the growing “split” between politicians and citizens who recognize a “coup” has been enacted across the world; aspects of the “anti-globalist alliance” for which Viganò previously called; the “corruption” of Joe Biden’s administration; and provided a meditation for the final days of Lent.

The most striking elements of the archbishop’s interview were his comments concerning a future conclave and the results of the last, which saw the announcement of Cardinal Jorge Mario Bergoglio as Pope Francis.

Valli asked the prelate if there was anyone currently in the College of Cardinals “who is credible and authentically Catholic on whom the Cardinals could focus their votes in a conclave in order to effect a total change of tune compared to the current pontificate?”

In response, Viganò observed that some popes are “inflicted” upon the Church rather than being more happily “granted” to Her.

“But before discussing the next Conclave, it is necessary to shed light on the abdication of Benedict XVI and the question of the manipulation of the 2013 Conclave, which sooner or later ought to be the subject of an official investigation.”

Should it be proven that there is “any evidence of irregularity,” Viganò stated that “the [2013] Conclave would be null and the election of Bergoglio would be null, just as all of his appointments, acts of governance, and magisterial utterances would be null.”

Such a monumental occurrence “would be a reset that would providentially bring us back to the status quo ante,” he said, “with a College of Cardinals composed only of those Cardinals who were appointed up to the time of Benedict XVI, ousting all those who have been created since 2013 who are notoriously ultraprogressive.”

The archbishop suggested that an investigation of this kind would at the very least serve to provide clarity to the faithful, and answer the “rumors” which are widely spread regarding Benedict XVI’s resignation.

“Certainly the present situation, with all of the rumors circulating about Ratzinger’s resignation and Bergoglio’s election, does not help the ecclesial body and creates confusion and disorientation among the faithful,” he said.

Benedict XVI appointed Viganò as Papal Nuncio to the United States in 2011, a position he held under Francis until his retirement in 2016, upon turning 75, the mandatory age at which resignation must be offered.

The next Pope must ‘stop referring to Vatican II’

Leaving aside the issue of the 2013 conclave, Archbishop Viganò offered advice to any future “papabile” looking to “change the tune.”

“If there is a Cardinal that really wants to ‘change the tune,’ let him come forward and – for the love of God – may he stop referring to Vatican II and instead think of the sanctification of the Clergy and the faithful,” said the archbishop.

Referring to the “horrors of the Bergoglian ‘pontificate,’” Archbishop Viganò had earlier noted that  these “horrors and errors” of the current Vatican “did not appear out of nowhere, as if in the preceding Pontificates everything was perfect and wonderful.”

“The crisis began with Vatican II,” he stated, “deploring the symptoms of an illness without understanding its causes is a useless and harmful operation.”

If the College of Cardinals is not persuaded that it is necessary to return to what the Church believed, taught, and celebrated up until and through the pontificate of Pius XII, all opposition to the present regime will be doomed to certain failure.

Some days prior to the archbishop’s interview, on March 25, a group of prominent U.S. prelates, along with the Papal Nuncio and Vatican curial officials, secretively gathered in Chicago to “understand the spirit of what they call the ‘opposition’” to Pope Francis, and to promote the ideology of Vatican II.

Archbishop Viganò referenced this meeting, saying that “we cannot help but agree with them [the conference attendees] on the intrinsic relationship between the conciliar cancer and the Bergoglian metastasis.”

The former Papal Nuncio declared that it was “evident” how the current state of the Church is a “punishment” from God:

The apostasy of the Catholic hierarchy is the punishment with which the Divine Majesty is afflicting rebellious and sinful humanity, so that it recognizes the sovereign rights of God, converts, and finally returns under the gentle yoke of Christ.

Doubling down on his statement that any future Pope would need to “stop referring to Vatican II,” Archbishop Viganò added: “as long as the Bishops do not recognize their betrayal and repent of it, no hope is possible for the world, since salvation can only be had in the one Flock under the one Shepherd.”

Archbishop Viganò is not alone in raising questions about the resignation of Benedict XVI and the ensuing conclave of 2013. Writing on LifeSiteNews in October 2021, former intelligence officer Steven O’Reilly highlighted a number of “unsolved mysteries” regarding Bergoglio and the 2013 conclave. O’Reilly has compiled considerable research into the conclave, found in the Conclave Chronicles at RomaLocutaEst.

The St. Gallen Mafia is also believed to have been involved to some extent in the resignation of Benedict XVI, since it comprised of a number of key cardinals who schemed for years to elect a pope who would change the Church and attempt to make it more liberal.