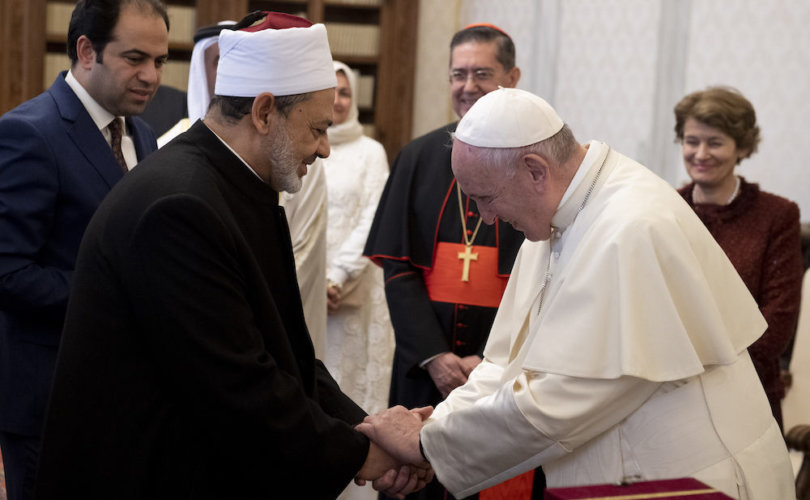 ROME, November 21, 2019 (LifeSiteNews) — Invoking the blasphemous Tower of Babel, whose builders sought to attain to heaven by their own power, Archbishop Carlo Maria Viganò has denounced plans approved by Pope Francis to erect a monument to “Human Fraternity” uniting Islam, Judaism and Catholicism, calling it “a Babelesque enterprise, designed by the enemies of God.”

The “House of the Abrahamic Family” (pictured below) will house a mosque, a synagogue, and a church symbolically united on one foundation.

In a Nov. 19 article published by Italian journalist Aldo Maria Valli on Duc in Altum, Archbishop Viganò writes: “In the garden of Abu-Dhabi the Temple of the World Syncretic Neo-Religion is about to arise with its anti-Christic dogmas. Not even the most hopeful of the Freemasons would have imagined so much!”

The “House of Abraham” project was presented to Pope Francis at the Vatican on November 15, during an audience with the Grand Imam Ahmed Al-Tayeb, Sheik of Al-Azhar (main photo), members of the Abu Dhabi goverment, and representatives of the Higher Committee for achieving the goals contained in the Document on Human Fraternity for World Peace and Living Together, signed last August.

Here below is an English translation of the article by Archbishop Carlo Maria Viganò, published with the kind permission of Aldo Maria Valli.

“To our Venerable Brethren … in peace and communion with the Apostolic See, Health and Apostolic Benediction. Never perhaps in the past have we seen, as we see in these our own times, the minds of men so occupied by the desire both of strengthening and of extending to the common welfare of human society that fraternal relationship which binds and unites us together… it is easily understood … why many desire that the various nations, inspired by this universal brotherhood.”

This is how the Supreme Pontiff Pius XI expressed himself in the opening of his 1928 encyclical Mortalium animos, signed on the day of the Epiphany, when the Church remembers three wise Magi from the East, leading an endless processional caravan guided by a shining star that appeared in the firmament, when on earth the Son of God came in the flesh, the Only Savior, the center of the cosmos and of history.

Ninety-one years later, on Friday 15 November 2019 — as reported by Vatican News — Pope Francis received in audience the Grand Imam Ahmed Al-Tayeb, accompanied by various personalities and representatives of the University of Al-Azhar and the Higher Committee, all inspired by the desire to give form and concreteness to the contents of the Document on the Human Fraternity for World Peace and Living Together, sealed last August in the wake of the historic Emirate Declaration, and signed by the Pontiff and the Imam during the Year of Fraternity.

With regard to the aforementioned Document, His Excellency Mohamed Khalifa Al Mubarak, as representative of the United Arab Emirates, had previously declared (Vatican News, 21 September 2019) that “in a world in which there are so many things that divide, the Emirates are committed to unite. Like a beacon of light, they wish to bring light into a dark world, bringing to light this document, the most important one signed in recent times”; as if to say that “the Light of the East” that has dawned upon us from on high like the Sun (Lk 1:78) is now eclipsed by a new “Luminous Lighthouse.”

The talks of the Vatican meeting were cordial, with words and expressive gestures of an already well-established friendship: let us remember that this is the sixth meeting between the Pontiff and the Great Imam. The Latin American warmth has thus prevailed over the long and rigid “frost” between the Apostolic See and that of the highest body of Sunni Islam. The meeting also offered the opportunity to present to the Pontiff a unique project whose concept has been presented through plans and 3D reconstructions.

Sir David Adjaye Obe is the creator of this architectural project, which will rise in the opulent and extravagant Abu Dhabi. It is the House of the Abrahamic Family, a sort of New Tent of Universal Brotherhood that evokes that other Tent of Reception in which the Old Testament Patriarch hosted three mysterious Angels (cf. Gen 18), the prefiguration of the Trinitarian God who was fully revealed to the legitimate Abrahamic posterity through faith in Jesus Christ.

Abrahamic Family House is therefore the name of this structure that will house a synagogue, a mosque and a church, naturally dedicated to the Poverello [St. Francis of Assisi].

Sir David’s project envisages the three different places of worship united by unique foundations and placed inside a garden, evoking a New Eden, a Gnostic and Masonic re-edition of the paradise of the First Creation.

As explained to Pope Bergoglio, this “structure … will serve as a place of individual worship, but also for dialogue and interreligious exchange.” In fact, a fourth building is also planned, the headquarters of the Centre for Studies and Research on the Human Fraternity, whose objective, which is inferred from the Abu Dhabi document, will be to “make the three religions known.” The ceremonies for the presentation of the Human Fraternity Award will also take place here.

The building of the House of the Abrahamic Family appears like a Babelesque enterprise, designed by the enemies of God, of the Catholic Church and of the only true religion capable of saving man and the whole created from destruction, both present as well as eternal and definitive. The foundations of this “House,” destined to give way and crumble, precisely where, at the hands of the same builders, the Only Corner Stone is incredibly about to be removed: Jesus Christ, Savior and Lord, on whom stands the House of God. “Therefore,” warns the Apostle Paul, “let each one take care how he builds upon it. For no other foundation can anyone lay than that which is laid, which is Jesus Christ. (1 Cor 3:10)

In the garden of Abu-Dhabi, the Temple of the World Syncretic Neo-Religion is about to arise with its anti-Christic dogmas. Not even the most hopeful of the Freemasons would have imagined so much!

Pope Bergoglio is thus proceeding to a further implementation of the apostasy of Abu Dhabi, the fruit of the pantheistic and agnostic neo-modernism that tyrannizes the Roman Church, germinated from the Council document Nostra aetate. We are forced to recognize it: the poisonous fruits of the “springtime of the Council” are before the eyes of anyone who no longer lets himself be blinded by the prevailing Lie.

Pius XI had alerted us and warned us. But the teachings that preceded Vatican II were thrown to the winds as intolerant and obsolete. The comparison between the pre-conciliar Magisterium and the new teachings of Nostra aetateand Dignitatis humanae — to cite only those —  shows a terrible discontinuity, which we must note, and which urgently needs to be amended as soon as possible. Adjuvant deo…

Let us listen to the words of the Supreme Pontiff Pius XI, when the Popes used to speak the language of Truth, chiseled with fire in diamond:

“For which reason conventions, meetings and addresses are frequently arranged by these persons, at which a large number of listeners are present, and at which all without distinction are invited to join in the discussion, both infidels of every kind, and Christians, even those who have unhappily fallen away from Christ or who with obstinacy and pertinacity deny His divine nature and mission. Certainly such attempts can nowise be approved by Catholics, founded as they are on that false opinion which considers all religions to be more or less good and praiseworthy, since they all in different ways manifest and signify that sense which is inborn in us all, and by which we are led to God and to the obedient acknowledgment of His rule. Not only are those who hold this opinion in error and deceived, but also in distorting the idea of true religion they reject it, and little by little, turn aside to naturalism and atheism, as it is called; from which it clearly follows that one who supports those who hold these theories and attempt to realize them, is altogether abandoning the divinely revealed religion …

During the lapse of centuries, the mystical Spouse of Christ has never been contaminated, nor can she ever in the future be contaminated, as Cyprian bears witness: “The Bride of Christ cannot be made false to her Spouse: she is incorrupt and modest. She knows but one dwelling, she guards the sanctity of the nuptial chamber chastely and modestly” (Mortalium animos).

“Today more than ever … the Church needs strong and coherent doctrines. Amid the dissolution… the compromises become more and more sterile, and each of them takes away a shred of truth… Show yourself then… who you are in the end, convinced Catholics…! There is a grace tied to the full and integral confession of faith. This confession, the Apostle tells us, is the salvation of those who make it, and experience shows that it is also the salvation of those who understand it.” (Dom Prosper-Louis-Pascal Guéranger, The Christian Meaning of History).

Pope Emeritus Benedict XVI recently broke his silence by making public his sorrowful plea for the Church in this troubled hour of its history: “Even today our faith is threatened by reductive changes to which worldly fashions would like to subject it, in order to take away its greatness. Lord, help us in this our time to be and to remain true Catholics — to live and die in the greatness of Your truth and in Your divinity. Give us always courageous bishops who may guide us to unity in faith and with the saints of all times, and who show us how fittingly to act in the service of reconciliation, to which our episcopate is called in a special way. Lord Jesus Christ, have mercy on us!”