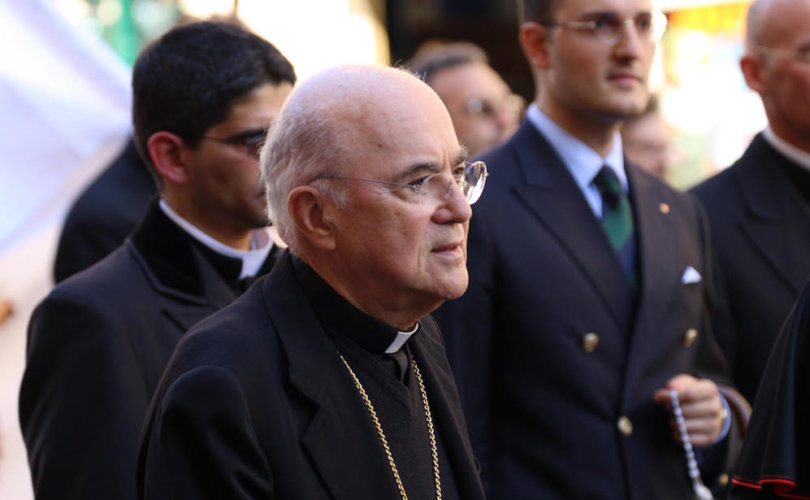 ROME, December 19, 2019 (LifeSiteNews) — Archbishop Carlo Maria Viganò has issued a strong defense of the Virgin Mary in response to the pope’s controversial homily on the feast of Our Lady of Guadalupe, in which he appeared to call the doctrine of Mary as co-redemptrix “nonsense.”

In a homily delivered in St. Peter’s Basilica on the liturgical feast of Our Lady of Guadalupe, the Pope said of Mary: “Faithful to her Master, who is her Son, the only Redeemer, she never wanted to take anything from her Son. She never presented herself as co-Redemptrix. No, disciple.”

The Pope continued: “She never stole for herself anything from her Son … When they come to us with stories saying we have to declare this, or make this or that other dogma, let us not get lost in nonsense [tonteras].”

For years, popes have been petitioned to proclaim a ‘fifth Marian dogma,’ honoring Our Lady as co-Redemptrix and Mediatrix of all graces.

While theologians and pastors have debated whether the dogmatic definition of Our Lady’s unique participation in Christ’s saving work is opportune, two popes have taught the doctrine (Pius XI and Pope John Paul) under the term co-Redemptrix and more still have taught the content while certainly no pope has dismissed it or claimed it derogates from Our Lord’s honor and dignity as sole mediator and redeemer.

Josef Ratzinger writing in 2002 indicated that while he agreed with the content of the term, he feared the term itself was novel and open to misunderstanding: “a correct intention being expressed in the wrong way.”

Saints including Maximilian Kolbe and Mother Teresa of Calcutta have also invoked the Blessed Virgin under the title “co-Redemptrix.”

Archbishop Viganò’s statement, titled “Mary Immaculate Virgin and Mother – Acies Ordinata, ora pro nobis,” is prefaced by a stirring passage from the prophet Isaiah that speaks of the Lord’s will to no longer keep silent in the face of the sin of idolatry.

The former apostolic nuncio to the United States then introduces the statement, writing:

The tragic story of this failed pontificate advances with a pressing succession of twists and turns. Not a day passes: from the most exalted throne the Supreme Pontiff proceeds to dismantle the See of Peter, using and abusing its supreme authority, not to confess but to deny; not to confirm but to mislead; not to unite but to divide; not to build but to demolish. Material heresies, formal heresies, idolatry, superficiality of every kind.

He continues: “On the liturgical memorial of the Virgin of Guadalupe,” Pope Francis “gave vent once again to his evident Marian intolerance,” striking at the heart the Marian dogma and the Christological dogma connected to it. But “the Immaculate Theotokos, ‘terrible as an army with banner unfurled’ [acies ordinate] will do battle to save the Church and will destroy the unfettered army of the Enemy that has declared war on her, and with him all the demonic pachamamas will return definitively to hell.”

“For more than six years now we have been poisoned by a false magisterium, a sort of extreme synthesis of all the conciliar misconceptions and post-conciliar errors that have been relentlessly propagated, without most of us noticing it,” he writes.

“Thus,” he continues, “in the course of these last decades, the Mystical Body has been slowly drained of its lifeblood through an unstoppable bleeding: the sacred deposit of faith has gradually been squandered, dogmas denatured, worship secularized and gradually desecrated, morality sabotaged, the priesthood vilified, the Eucharistic Sacrifice protestantized and transformed into a convivial Banquet…”

The distinctive mark of modernist heresy, stresses Msgr. Viganò, is the concealment and “tactic of affirming what one wants to destroy, using vague and imprecise terms, promoting error without ever formulating it clearly.” The result, he says, is what we now have before our eyes: “A Catholic Church that is no longer Catholic; a container emptied of its authentic content.”

Archbishop Viganò concludes: “The Church is shrouded in the darkness of modernism, but the victory belongs to Our Lord and His Bride. We want to continue to profess the perennial faith of the Church in the face of the roar of evil that besieges her. We want to keep vigil with her and with Jesus, in this new Gethsemane of the end times; to pray and do penance in reparation for the many offenses caused to them.”