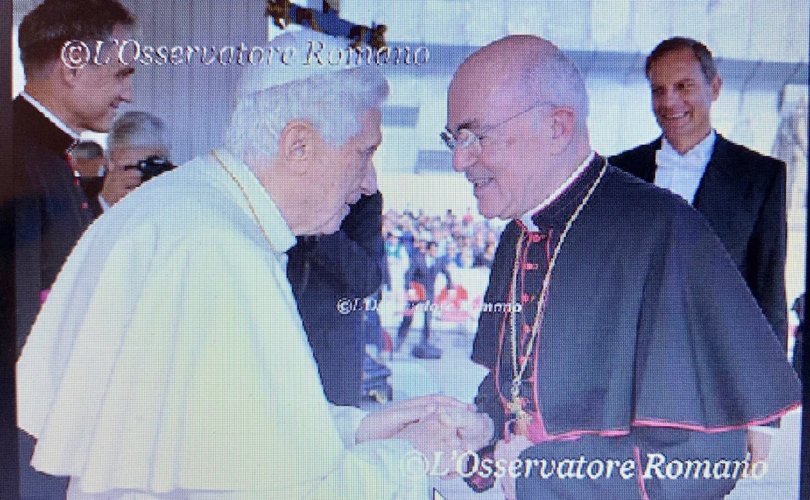 ROME, January 16, 2020 (LifeSiteNews) — In the wake of the controversy surrounding the genesis of Cardinal Robert Sarah’s new book with Benedict XVI on priestly celibacy, Archbishop Carlo Maria Viganò has released a testimony denouncing Archbishop Georg Gänswein for what he calls his “abusive and systematic control” of the pope emeritus.

“It is time to reveal the abusive and systematic control exercised by Archbishop Georg Gänswein over the Supreme Pontiff Benedict XVI since the beginning of his pontificate,” Archbishop Viganò writes in the one-page testimony released on January 16 (see official English text below).

LifeSite has reached out to Archbishop Gänswein, and will update readers if he responds.

Archbishop Viganò’s testimony follows several days of fierce backlash against the pope emeritus and the cardinal, portraying them as opposed to Pope Francis and undermining his widely anticipated apostolic exhortation on the Amazon Synod. It also comes after the Archbishop Gänswein openly contradicted Cardinal Sarah’s official account of the genesis of the book, claiming instead that Benedict “did not approve a project for a co-authored book and he had not seen or authorized the cover.”

In the new testimony, Archbishop Viganò asserts that “Gänswein habitually filtered information, arrogating to himself the right to judge how opportune or not it was to send it to the Holy Father.”

Archbishop Gänswein, who currently serves as personal secretary to Benedict XVI and as prefect of the papal household in the current pontificate, has worked alongside the pope emeritus for over two decades. In 1996, Gänswein joined the staff of Cardinal Joseph Ratzinger in the Congregation for the Doctrine of the Faith, and in 2003, he replaced Josef Clemens as Ratzinger’s secretary.

When Cardinal Ratzinger was elected pope in 2005, Gänswein was appointed his principal private secretary. In 2012, he replaced Cardinal James Michael Harvey as prefect of the papal household. In this post, the German prelate oversaw the majority of Pope Benedict XVI’s public and private events, correspondence, visitors, and apostolic journeys.

In his January 16 statement, Archbishop Viganò offers two personal experiences he had of Gänswein’s alleged “control” of Benedict, the first as a high-level official in the Vatican Secretariat of State and the second as apostolic nuncio to the United States.

He says what has moved him to take this step is Archbishop Gänswein’s “sensational and slanderous insinuation” against Cardinal Robert Sarah following the release of the new co-authored book, titled From the Depths of Our Hearts: Priesthood, Celibacy, and the Crisis of the Catholic Church.

In comments to the ANSA news agency on Tuesday, Archbishop Gänswein said he has “acted on instructions from the pope emeritus and asked Cardinal Robert Sarah to contact the book’s publisher and request that they remove Benedict XVI’s name as co-author of the book, and remove his signature from the introduction and conclusion.”

“The pope emeritus knew that the cardinal was preparing a book and he sent him a text on the priesthood authorizing him to use it as he wished,” Gänswein continued. But contrary to an official statement released by Cardinal Sarah earlier on Tuesday, the German prelate claimed that Benedict “did not approve a project for a co-authored book, and he had not seen or authorized the cover.”

“It is a misunderstanding that does not raise questions about Cardinal Sarah’s good faith,” he said.

Just a short time after, Cardinal Sarah openly said he stood by his official statement, affirming that it “remains my one and only version of the course of events.”

Ignatius Press, which is publishing the book in English, has stood by the co-authorship and cover.

Here below is the official English text of Archbishop Carlo Maria Viganò’s testimony.

It is time to reveal the abusive and systematic control exercised by Archbishop Georg Gänswein over the Supreme Pontiff Benedict XVI since the beginning of his Pontificate.

Gänswein habitually filtered information, arrogating to himself the right to judge how opportune or not it was to send it to the Holy Father.

I can testify that, when Pope Benedict summoned me in audience on April 4, 2011, a few days after I had sent him my first letter (that was later illegally published during Vatileaks), I said to the Pontiff: “I will not speak to you about the situation of corruption in the management of the Papal Villas, since I assume that you have already taken note of the memo on the matter, which I delivered to your secretary for you, in view of this audience.”

The Holy Father, in all simplicity and innocence, and without showing any surprise, said to me: “No, I didn’t see anything.”

I also testify to another event that shows how Monsignor Gänswein controlled information for the Holy Father and conditioned his freedom of action. On the occasion of the canonization of Marianne Cope and Kateri Tekakwitha, having requested in writing to the then-prefect of the papal household, Archbishop James M. Harvey, to be received in audience by the Pope, and having received no response, I went to the same Prefect on Tuesday, October 23, 2012, asking him why I had received no response to my request for an audience.

I remember perfectly the circumstance, because Archbishop Harvey suggested that I attend the general audience the next day, so that I could at least greet the Holy Father personally, with the other bishops who were present. Archbishop Harvey answered me with the following words: “Gänswein said to me: ‘Archbishop Viganò is the last person who can approach Pope Benedict!’”

He then added that, at the beginning of his pontificate, Benedict XVI, indicating Gänswein to him with his index finger, exclaimed: “Gestapo! Gestapo!”

This unscrupulous attitude was revealed from the very beginning of his pontificate, also in the determination with which Gänswein managed to distance from the pope his precious assistant and secretary, Ingrid Stampa, whom then-cardinal Ratzinger had wanted at his side for well over a decade after the death of his sister Maria Ratzinger.

Furthermore, it is known that to escape this total control exercised over his person by Gänswein, Pope Benedict often went to visit his previous special secretary, Bishop Josef Clemens, inviting Ingrid Stampa to these familial gatherings.

I am issuing this statement following what Archbishop Gänswein asserted in recent days to the ANSA news agency, contradicting what Pope Benedict himself had written in his correspondence with Cardinal Sarah. This statement is a sensational and slanderous insinuation against the most eminent Cardinal Robert Sarah, which he swiftly denied.