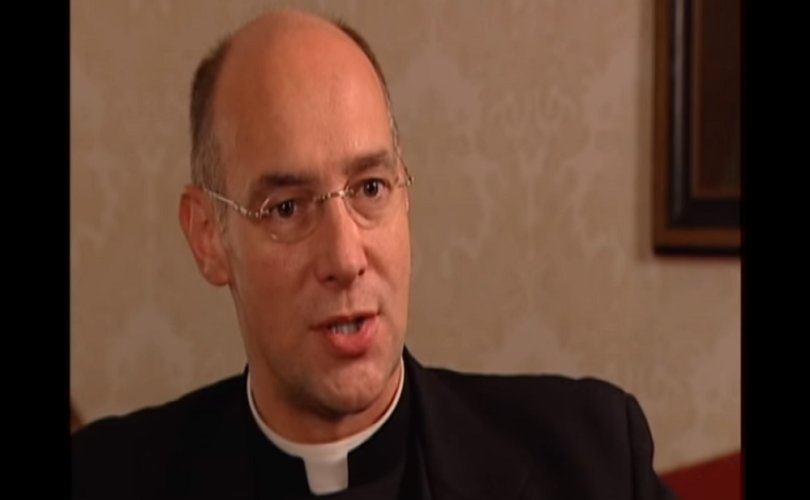 WASHINGTON, D.C., June 18, 2019 (LifeSiteNews) — Archbishop Carlo Maria Viganò revealed in a new interview that he received complaints, as papal nuncio, that Msgr. Walter Rossi, rector of the Basilica of the National Shrine of the Immaculate Conception in Washington, D.C., had engaged in homosexual harassment and predation.

In an interview with Italian journalist Marco Tosatti, Viganò, a former apostolic nuncio to the United States, said, “Monsignor Rossi is, without a doubt, a member of the ‘gay mafia.’” Viganò, who accused Pope Francis of covering up sexual misdeeds of high-ranking prelates, went on to say, “I can say that, while I was a nuncio in the United States, I received the documentation that states that Msgr. Rossi had sexually molested male students at the Catholic University of America.” According to Viganò, “the Vatican, in particular Cardinal [Pietro] Parolin, is well aware of the situation of Msgr. Rossi, as is Cardinal [Donald] Wuerl.”

Viganò added, “I can finally testify that Rossi’s name was proposed for promotion to my predecessor, Archbishop Pietro Sambi, who blocked his progress.” Viganò said, “These facts clearly show how the ‘gay mafia’ operates.”

George Neumayr of The American Spectator has reported that Catholic University of America alumni said Msgr. Rossi had “groomed” male students and even suggested having group sex. Neumayr cited an unidentified “archdiocesan source” who said Rossi rewarded men for submitting to him while persecuting those who did not. That source claimed that Rossi is a “gay sexual harasser” of students at CUA. Rossi is a member of the CUA board, as are Cardinals Timothy Dolan, Blase Cupich, and Daniel DiNardo, as well as several bishops.

Viganò noted that Msgr. Rossi has connections to Bishop Michael Bransfield, Rossi’s immediate predecessor at the basilica — who was suspended after evidence emerged of his sexual assaults on seminarians and misappropriation of millions of dollars for personal expenses — and then-cardinal Theodore McCarrick, who chose Rossi to replace Bransfield. Bransfield was noted for giving sizeable monetary gifts to bishops and priests. Once revelations of his behavior were made public, many of those gifts were returned. Viganò told LifeSiteNews that a monetary gift he received from Bransfield was immediately turned over to a Church charity for African seminarians.

Archbishop William Lori of Baltimore is conducting an investigation into Bransfield. McCarrick is the disgraced former archbishop of Washington, D.C. whom Pope Francis laicized because of allegations of serial sexual abuse, including pedophilia.

“In fact, his successor as rector of the Basilica, Msgr. Walter Rossi, he was appointed there by McCarrick the same year that Bransfield was appointed bishop,” Viganò said.

A spokesperson responded to Church Militant to accusations against Rossi:

The National Shrine has never received any credible allegations of improper conduct by Monsignor Rossi. To the contrary, in 2018 Monsignor Rossi publicly condemned the issues of abuse that have plagued the Catholic Church (statement attached). The recent claims by Archbishop Viganò are baseless and without merit or substantiation.

In the face of push-back by some sectors of the Catholic Church, Viganò recently told the Washington Post:

Not only have my testimonies not been denied, but some of the facts they contain have been independently confirmed. To cite just two examples, the letter of [then-Archbishop Leonardo] Sandri to Father [Boniface] Ramsey [of New York] confirmed my assertion that Vatican officials knew of the McCarrick allegations as early as 2000, and Cardinal [Marc] Ouellet, in his open letter to me, confirmed that he told me in person and then put in writing the restrictions imposed by Pope Benedict on McCarrick.

Viganò, who is now in hiding, also told the Washington Post that homosexuality within the priesthood and bishops who engage in cover-ups continue to afflict the Church. He wrote, “[T]he ‘gay mafia’ among bishops is bound together not by shared sexual intimacy but by a shared interest in protecting and advancing one another professionally and sabotaging all efforts at reform.” Viganò also wrote, “It is not pedophiles but gay priests preying on post-pubertal boys who have bankrupted the U.S. dioceses.” He cited Fr. Paul Sullins of the Ruth Institute, who reported in “Is Catholic clergy sex abuse related to homosexual priests?” that the share of homosexual men admitted to the priesthood rose from “twice that of the general population in the 1950s to eight times the general population in the 1980s. This trend was strongly correlated with increasing child sex abuse.” Sullins also reported, “Estimates from these findings predict that, had the proportion of homosexual priests remained at the 1950s level, at least 12,000 fewer children, mostly boys, would have suffered abuse.”

Given this “overwhelming evidence,” Viganò said it is “mindboggling” that homosexuality has not been addressed in recent Church documents, including the unprecedented February 2019 Vatican conference on sexual abuse. Vigano wrote, “Given the overwhelming evidence, it is mind-boggling that the word ‘homosexuality’ has not appeared once, in any of the recent official documents of the Holy See, including the two Synods on the Family, the one on Youth, and the recent Summit last February.”