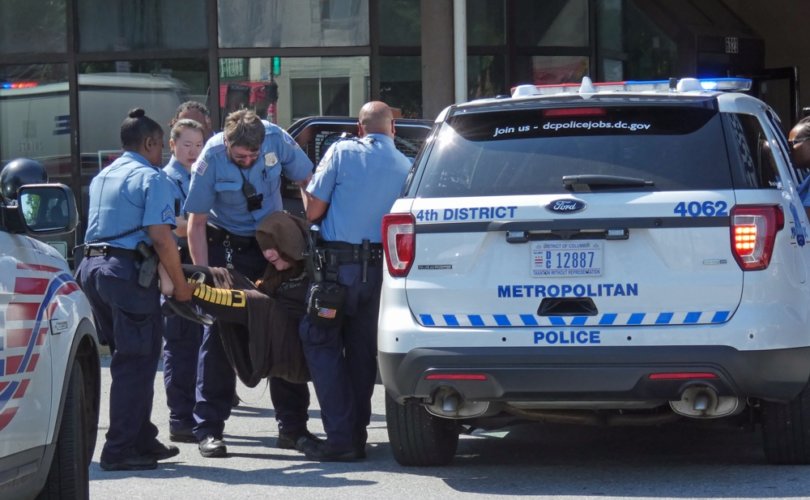 Police drag pro-life advocate Lauren Handy after arresting her during a Red Rose Rescue on May 26, 2018.Credit: Fr. William Kuchinsky

WASHINGTON, D.C., May 30, 2018 (LifeSiteNews) – The District of Columbia has dropped all charges against two pro-life activists who refused to leave an abortion facility as part of a “Red Rose Rescue” on Saturday. The third, a Catholic priest, got off with a citation that veteran activists say will likely be dismissed.

“It’s an absolute miracle,” one of those rescuers, 24-year-old Lauren Handy, told LifeSiteNews. She called it “a confirmation from God that Red Rose Rescues should continue.”

Handy, Father Fidelis Moscinski of the Franciscan Friars of the Renewal, and a pro-life advocate going by “Baby Jane Doe” in solidarity with the children killed by abortion were arrested on May 26 for refusing to leave the Capital Women’s Services abortion center. They were inside the facility for around two hours, urging the mothers inside to choose life and offering them red roses.

A fourth pro-life activist, Adele Gillhooly, was with them, but chose to leave when police asked her to. The rescue caused at least three women to leave the abortion facility.

“They didn’t tell us” why the charges were dropped, Handy said. “I was released on Saturday 30 minutes before court closed that day. Baby Jane Doe was released on Monday.”

Fr. Fidelis was also released on Saturday with a citation. Monica Migliorino Miller of Citizens for a Pro-Life Society predicted those charges will be dropped too, if they haven’t been already, and said it’s likely he received the citation because he was “booted” from jail earlier than the others.

“It’s a mystery in some respects” why the charges were dropped, said Miller, a longtime pro-life activist who has participated in Red Rose Rescues in Michigan.

“The last time [pro-life activists] did a red rose at that abortion facility, the complainant was the building manager,” but this time it was the abortion manager.

“We do wonder if maybe the clinic does not want to pursue the complaint because they don’t wanna get tied up in court,” Miller told LifeSiteNews.

The abortionist at Capital Women’s Care is Steven Brigham, dubbed “the worst abortionist in America” by the watchdog group Operation Rescue. In 2012, he was charged with murder, but those charges were dropped because the state couldn’t prove five murdered babies had been killed in Maryland.

Police found the bodies of 35 aborted babies at an illegal late-term abortion facility Brigham was running. Some of those babies were as old as 36 weeks gestation.

Brigham has a history of harming women, medical license revocation, and being forced to shut down filthy facilities. The New Yorker even profiled his sordid history in a 2014 piece about his “chain” of unsanitary abortion centers.

Father Stephen Imbarrato, whose prosecution for participating in a Red Rose Rescue at the same D.C. facility on December 2, 2017 is ongoing, said Saturday’s rescue “had ripple effects that only God knows the benefits of.” He, like Miller, said he thinks Fr. Moscinski’s citation has been dismissed.

Imbarrato told LifeSiteNews that on Saturday afternoon, he went to arraignment court and “found out from the bailiff that her [Handy’s] charges had been dismissed.”

He said he prayed to God to help him find Lauren.

“At that moment, the phone rings,” he recalled. It was Handy’s mother saying her daughter had been released – and that she was at arraignment court, where Imbarrato was looking for her.

He soon found her.

“She shows me the paperwork,” he recollected. “No charges – that’s what it says.”

Handy and Imbarrato went to the precinct for the former to collect her belongings. It was while she was doing that, the priest said, that he had an extraordinary conversation with a police officer. He doesn’t know the officer’s name, but he said the officer essentially told him Handy’s charges were being dismissed because the police recognized the rescuers were doing what they did to save lives.

“He said, ‘well, because we know what you did. We did what we had to do – we also know why you did it, and so somebody made a decision…to not go forward with the charges.’”

According to Imbarrato, the officer said that “a while back,” a man was arrested for having an illegal gun in D.C., which he used to shoot a dog who was in the process of mauling a girl. He wasn’t prosecuted because he had been saving the girl’s life.

“If you read the story” of that case, it’s “a bit different – the guy fulfilled some conditions” first, said Imbarrato. But “that sounds like necessity defense, right?”

Imbarrato said the officer’s remarks were “unofficial and he could have been speculating.”

“Did somebody get a phone call?” he asked. “There’s really no way of knowing why these charges were dismissed.”

LifeSiteNews inquired with D.C. Superior Court as to why the charges were dismissed, but did not hear back by press time.

Another remarkable part of the story is that “Baby Jane Doe” eventually had her charges dismissed, too, and was released from police custody without ever revealing her name.

The Red Rose Rescue movement was inspired by Canadian pro-life activist Mary Wagner, who regularly conducts such rescues in Canada. She has been imprisoned multiple times for doing so.

In 1994, then-President Clinton signed the Freedom of Access to Clinic Entrances (FACE) Act, which makes it a federal crime to physically block women from obtaining abortions. FACE effectively ended the widespread use of normal rescue tactics.

None of the Red Rose Rescuers have been charged with violating FACE.

“If FACE was gonna be used, it would have been used by now,” said Miller.