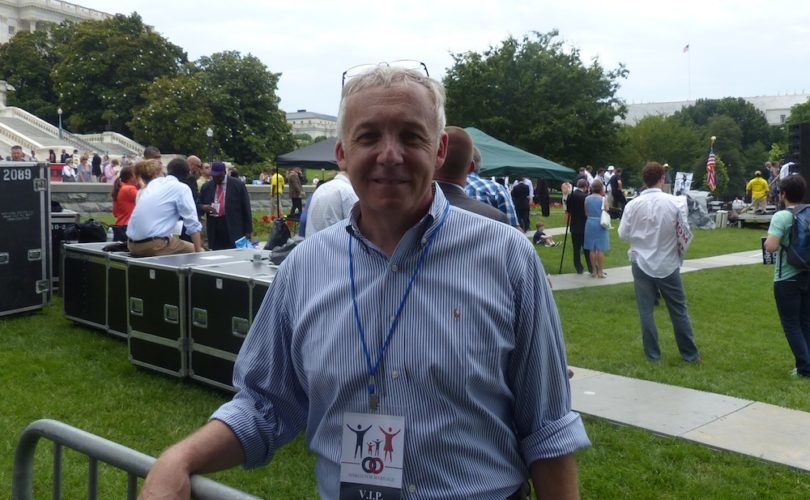 Doug Mainwaring, a self-described gay man who is abstinent, says marriage was a joke in the homosexual community ten years ago.Winnie Okafor

WASHINGTON, D.C. – The homosexual lobby’s effort to redefine marriage “is a form of incremental totalitarianism,” a self-described gay man told LifeSiteNews at the second annual March for Marriage in Washington, D.C.

Doug Mainwaring, who was a speaker at the March, spoke with LifeSiteNews after his brief presentation. Asked about his sexual orientation, he said, “I identify as gay in the same sense that an alcoholic who has been going to AA meetings for years would never fail to identify himself as an alcoholic.”

Noting that he “put that aside a few years ago,” Mainwaring said “the impulses are still within me.” But he said he opposes marriage redefinition because “same-sex 'marriage' is the most implausible idea to ever come down the pipe.”

“I don't have to go into religious arguments. Just from natural law — and people even dismiss natural law nowadays,” said Mainwaring. “Even 10 years ago, in the gay community, it was a joke in the same-sex community. 'This is my husband, ha ha ha.'”

“Gays and lesbians have been used as pawns by progressives to bring about this wedge issue that I really feel strongly is meant to usher in incremental totalitarianism,” he said.

Noting the pressure faced by former Mozilla CEO Brendan Eich and other famous individuals, he said “we silence ourselves because we're afraid of saying anything that might make other people think less of us. And by doing that, we all give the appearance that we agree. Silence is agreement.”

Noting that pressure has harmed “CEOs and world-renowned brain surgeons,” specifically Dr. Ben Carson, for donating money or speaking out in favor of marriage, Mainwaring said that “it's going to happen to you.” The message, he said, is that “you'd better watch out.”

Judges “are falling like dominoes” on marriage, he said. “I don't believe it's because all of a sudden they all saw the light on same-sex 'marriage.' I think it's they don't want anybody to look at them crooked at the country club.”

Mainwaring pointed to a recent article by Reuters, which showed that the nation's top law firms are standing with same-sex “marriage” supporters in court. “I've talked to tons of attorneys around here,” says Mainwaring, “and they're all scared to death.”

“It's the progressives' impact on our society, and they'll” win the fight “any way they can.”