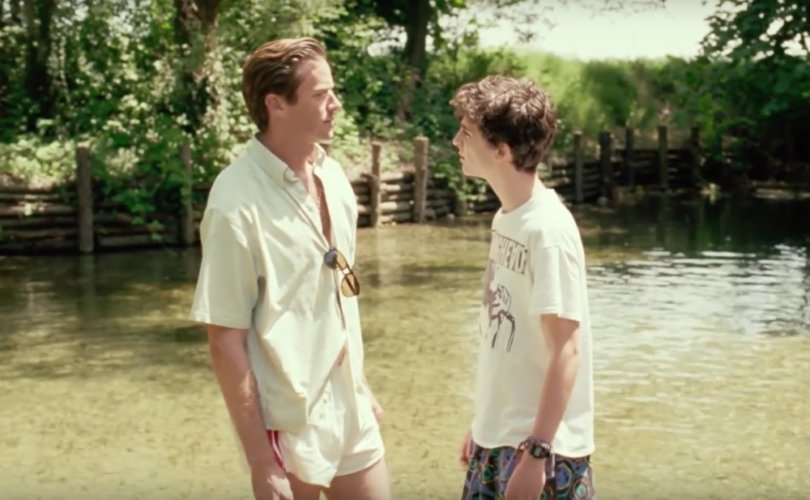 HOLLYWOOD, January 29, 2018 (LifeSiteNews) – Despite the fact that Hollywood is still swirling in a vortex of sexual harassment allegations, “Call Me by Your Name,” a movie about an older man’s homosexual “romance” with a 17-year-old boy, has picked up four Academy Award nominations.

But by nominating the film, voting members of the Academy of Motion Picture Arts and Sciences (AMPAS) have just put their tacit personal seals of approval on what the Boston Globe is calling “sexual predation and abuse.”

“'Call Me by Your Name,' the new film by Luca Guadagnino, is a deftly directed, beautifully photographed, wonderfully acted master class in sexual predation and abuse,” wrote Cheyenne Montgomery in a January 25 collum titled ‘Call Me by Your Name’ is a dishonest, dangerous film.

“But even the brief 'age gap' caveats miss the point. 'Call Me by Your Name' isn’t about an older man and a younger man. It falsely romanticizes an exploitative relationship between a grown man and a teenager. These manipulative relationships cause lasting damage, as I know from my own experience,” she adds.

Montgomery went on to relate how when she was a teen she was sexually manipulated and abused by an adult who at first posed as her protector.

“In real life and in the movie, these shouldn’t be thought of as sexy coming-of-age romances, deliciously painful trysts from which both partners emerge better for having known each other. When an adult grooms a teenager, and engages her or him in a sexual relationship, it’s neither romantic nor consensual. It left me shattered. For years I lived with intense shame, believing I was a bad person,” she wrote.

“This film has the potential to cause real harm by normalizing this kind of sexual predation. It could be particularly damaging for LGBT youth, who are already at a high risk for depression and suicide. “

“So no, 'Call Me by Your Name' isn’t a radical, brilliant piece of art. We need to call it by its name. That name is abuse,” she concluded.

Since the movie debuted in November, it has been touted as an Oscar favorite by countless critics.

“I know many men to whom this sort of thing happened. This is indeed a dangerous film,” he tweeted.

I know many men to whom this sort of thing happened. This is indeed a dangerous film. https://t.co/G1sGddpVAZ

“Sciambra, now a faithful Catholic, said when as a boy he finally had the courage to walk into a gay bar what he found were an enormous number of older men eager to show him the ropes, which they did, and pass him around. Already wounded by his own relationship with his father, Sciambra eagerly sought refuge there. He says the same story can be told of practically all gay men, though they won’t admit it to you or me,” wrote Austin Ruse last summer in Crisis Magazine.

After scoring win after win in courts across the nation, culminating in the United States Supreme Court’s landmark same-sex marriage Obergefell decision in 2015, the progressive left has moved on to its remaining frontiers: transgenderism and adult/child sexual relationships.