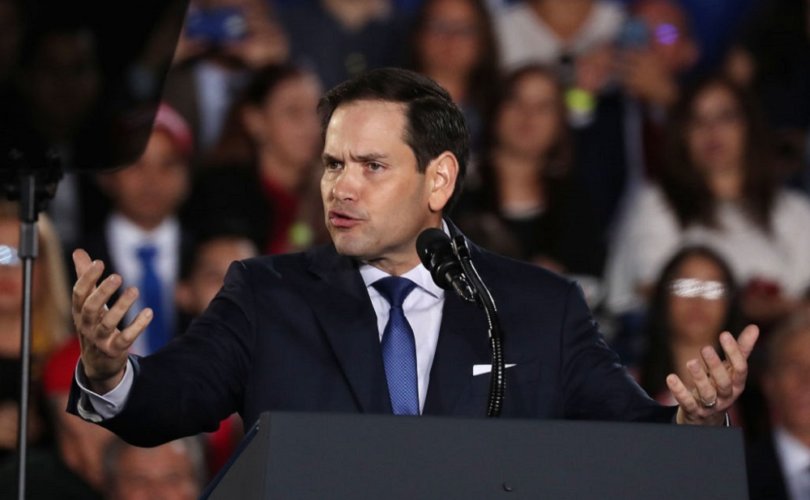 WASHINGTON, D.C., February 19, 2020 (LifeSiteNews) ― A U.S. senator from Florida has issued an informal statement against the Vatican accord with China.

Yesterday, the press office for Senator Marco Rubio, 48, tweeted criticism for the Holy See’s silence about China’s war on religious freedom and a link to a Wall Street Journal article sympathetic to Cardinal Joseph Zen.

“The Vatican made a pact w/ the Chinese Communist Party to force Chinese Catholics to support the party,” Rubio said.

“The Party’s abuse knows no bounds, whether Buddhist, Muslim, or Christian & we cannot be silent.”

Senator Rubio is a Catholic, having returned to the Catholic faith after a long journey that led him through Mormonism and Evangelicalism.

The Wall Street Journal article to which the senator linked reinforced his message against the Vatican-China accord and the Chinese government’s persecution of religious people. Its author, columnist William McGurn, interviewed Cardinal Zen in New York last Thursday.

When McGurn asked Zen about his remark to his brother bishops that they are “passively” witnessing “the murder of the Church in China by those who should protect and defend her from her enemies,” Zen “double[d] down.”

“You can never compromise with a totalitarian regime because they want everything,” Cardinal Zen told him. “Would you have encouraged St. Joseph to negotiate with Herod?”

“It even quotes Jin to imply there is no way forward until Cardinal Zen goes off, ahem, to his eternal reward.”

But Cardinal Zen told McGurn that it was “ridiculous” to attempt to pit him against late Jesuit Bishop Jin, for Jin was a good friend of his, “a good bishop,” and someone who was imprisoned by the communist Chinese authorities for 27 years.

“The cardinal says he has a hard time believing that Jin — who spent 27 years in prison — would be as naive about the communists as today’s Vatican diplomats,” said McGurn.

The journalist accused La Civiltà Cattolica of following the Ostpolitik model of the 1960s and 1970s.

“Back then, the Vatican accepted the status quo of the Iron Curtain and muted its criticism of Eastern Europe’s Communist regimes in hopes of better treatment for the faithful,” he wrote.

“Then came Pope John Paul II, the first pope from a Communist land, who challenged these regimes where they were most vulnerable: their moral authority.”

McGurn also accused the Jesuit magazine of romanticism and posturing as a 21st-century version of Jesuit missionary Matteo Ricci. The 17th-century Ricci won converts by “inculturating” the Catholic faith to Asian cultures, but (as McGurn pointed out) the Vatican-China agreement was written by men of European heritage:

The 2018 Vatican concordat with Beijing was not the work of Chinese Catholics. It was an almost exclusively European affair, led primarily by Pope Francis, Cardinal Pietro Parolin and Archbishop Claudio Maria Celli. Instead of fostering a “reconciliation of hearts” between the patriotic and underground wings of the church, Cardinal Zen says, the agreement is attempting to impose a false and destructive institutional unity.

McGurn said also that the Chinese government has only increased persecution of Christians since the Vatican-China deal was signed, and, meanwhile, “the price extracted has been high: the pope’s silence.”

“This silence comes at a particularly terrible moment, when Mr. Xi is busy persecuting everyone from Tibetan Buddhists and Muslim Uighurs to house church Christians and Falun Gong practitioners,” he added.

“Nor is Beijing making any effort to hide its intentions: The same day Cardinal Zen was in Washington to collect his award, China named Xia Baolong as its new point man in Hong Kong,” he continued.

McGurn ended his article with the recommendation that Francis listen to Chinese bishops with experience dealing with the communist regime instead of his band of European advisers.

“If the Vatican is looking for a diplomatic approach that combines the wisdom, cunning and respect for Chinese culture represented by Matteo Ricci, instead of putting Europeans in the lead, it could start with bishops who have experience of living under and dealing with the Chinese Communist Party,” he wrote.

“Not to mention a little more honesty about what it has in fact agreed to.”

David Mulroney, a former Canadian ambassador to China, told LifeSiteNews that McGurn’s point about Europeans, not Chinese bishops, being in charge of the negotiations is important.

“The WSJ article makes the important point that the Sino-Vatican agreement was negotiated not by Chinese Catholics, but by Vatican officials who appear susceptible to the same delusions about China and its intentions that infect many western politicians, including here in Canada,” he said.

LifeSiteNews contacted Senator Rubio’s office for further comment and is awaiting a response.