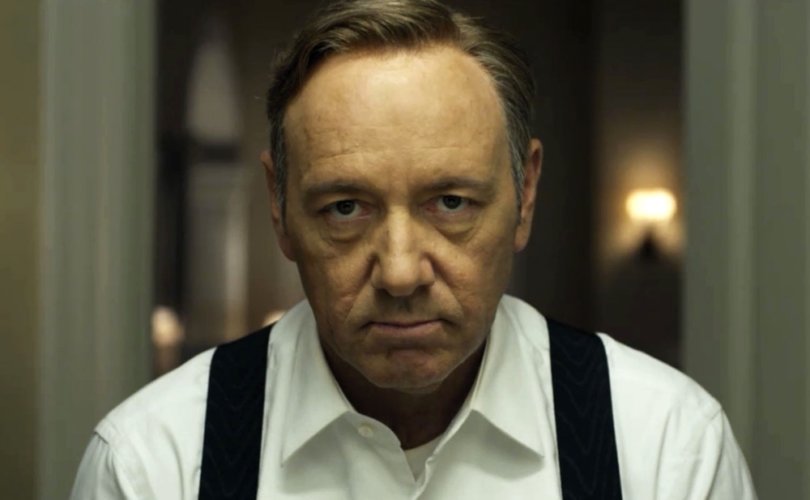 Spacey stars in The Billionaire Boys, distributed by Vertical Entertainment, which will be released as a VOD (Video on Demand) in July before reaching a limited number of cinemas on August 16. The movie is based on the true story of a group of private school boys who were enticed into a get-rich-quick scheme that turned deadly. But the seamy plot is playing second fiddle to the fact that the blacklisted Spacey is appearing in it at all.

Following accusations from several men in Hollywood that Spacey had molested them as minors, Spacey was de facto expelled from the film industry. He was suspended from the wildly popular Netflix series “House of Cards” and written out of the show’s final season. Future Netflix projects involving Spacey were canceled. In addition, scenes in the Getty biopic All the Money in the World featuring Spacey were reshot with Christopher Plummer in his role.

Perhaps the small independent producer that made The Billionaire Boys does not have the money to reshoot Spacey’s scenes, for the film is being launched with Spacey squarely in it.

“We hope these distressing allegations pertaining to one person’s behavior — that were not publicly known when the film was made almost 2.5 years ago — do not tarnish the release,” Vertical Entertainment told online film magazine “The Wrap”.

In defending the release, the distributor explained that they wanted the rest of the cast and the crew to be able to see the fruits of their labors.

“We don’t condone sexual harassment on any level and we fully support victims of it. At the same time, this is neither an easy nor insensitive decision to release this film in theaters, but we believe in giving the cast, as well as hundreds of crew members who worked hard on the film, the chance to see their final product reach audiences,” it stated.

Nevertheless, it seems that the distributor is trying to turn the lemons of scandal into the lemonade of publicity.

A trailer for the film begins provocatively with the question “What’s that difference between a bad guy and a good guy who does bad things?”

“Do you think people get rich by playing by the rules?” he demands of a distraught youth.

To judge by the trailer, the film will feature fancy cars, immodest women, and scenes of brutal violence. It won’t be fun for all the family, but Spacey fans may be willing to ignore their idol’s sexual behavior. An pseudonymous fan commenting on The Wrap’s article about The Billionaire Boys wrote, “I will be supporting this film when it’s released. I miss Spacey and will always be a fan, regardless of what happened in his past.”

In November 2017, Star Trek actor Anthony Rapp alleged that in 1986 the then 26-year-old Spacey had tried to sexually assault him. Rapp himself was only 14 at the time. Afterwards, several men, mostly actors decades younger than Spacey, said he used his privilege as a big star to sexually harass them.

Harry Dreyfuss, the son of actor Richard Dreyfuss, has accused Spacey of groping him when he was only eighteen. In an article he wrote for Buzzfeed, Harry wrote that Spacey did this when Richard was in the same room with them. “He knew he could fondle me in a room with my father and that I wouldn’t say a word. He knew I wouldn’t have had the guts. And I didn’t,” he said.

Harry thought of the incident as minor, something to be related as a funny anecdote, until he reached the New York theatre world as an adult. Then he discovered that it was a familiar story.

“Often, they would respond by saying,’I know a guy that that happened to as well’,” he wrote. “The victims in many of these stories were often young men. These admissions became so common that I started to plan on a break in the story just so people could nod and say, ‘Oh yeah, I’ve heard this before’.”

Among the men who came forward was a former child student of Spacey’s, who began a sexual relationship with the actor when he was 14.

Spacey’s response to Rapp’s allegations included the admission that he was a homosexual.

“I’m beyond horrified to hear his story,” he wrote, adding that he didn’t remember harassing Rapp.  “If I did behave then as he describes, I owe him the sincerest apology for what would have been deeply inappropriate drunken behavior.”

“In my life I have had relationships with both men and women. I have loved and had romantic encounters with men throughout my life, and I choose now to live as a gay man.”

His statement divided homosexual commentators, some of whom were furious that Spacey had chosen to “come out of the closet” only when accused of a sex crime, and others who said that the homosexual community should face its problems with ephebophila (sexual attraction to teenagers).