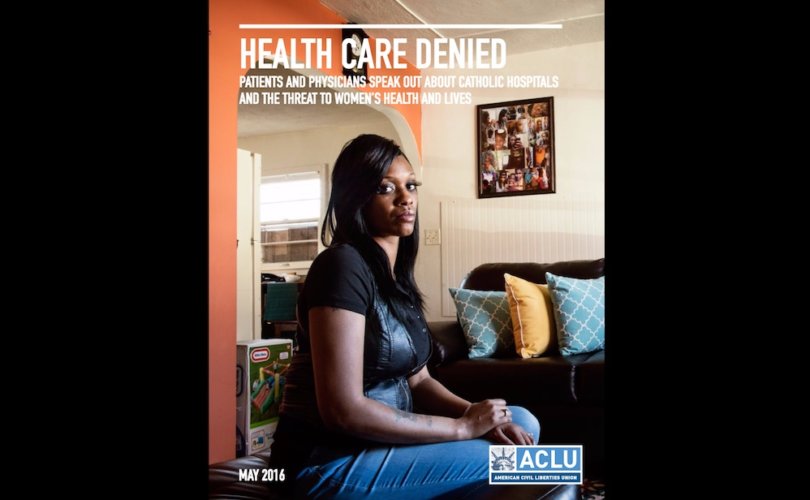 NEW YORK, May 9, 2016 (LifeSiteNews) – Catholic hospitals across the U.S. are “withholding emergency care” and denying “essential health services,” the ACLU is alleging in a new campaign. They also inflict harm on “transgender and gender-non-conforming patients” “when seeking reproductive healthcare.”

In a new report, “Health Care Denied,” the ALCU calls for denial of federal dollars from Catholic healthcare institutions, as well as investigations into their practices.

With a subtitle of “Patients and Physicians Speak Out About Catholic Hospitals and the Threat to Women's Health and Lives,” the stated goal of the report “is to shine a light on the harm and discrimination occurring at hospitals across this country.”

Produced in partnership with MergerWatch, a group founded by a “reproductive health” group that combats religious medical care and receives funding from Planned Parenthood in New York, the document decries how the U.S. Bishops’ 2009 Ethical and Religious Directives for Catholic Health Care Services shapes Catholic healthcare.

The Directives spell out the Church's moral teaching for institutionally based Catholic healthcare services in the U.S., and in keeping with Church teaching, they prohibit such things as contraception, sterilization and abortion, which the ACLU deems “appropriate care.”

This latest strike by the civil liberties group follows a series of legal challenges directed over several years at the U.S. Catholic Church, with the ACLU either suing Catholic hospitals, the U.S. Bishops or the federal government, or otherwise advocating in opposition of Catholic morals.

The new ACLU document calls a number of the Bishops’ positions relative to the Directives “myths,” and lists instances of women refused “emergency abortions” and tubal ligations after pregnancy at Catholic hospitals, taking issue with the U.S. Bishops’ contention in the Directives that direct abortion is never morally permissible no matter the reason.

It laments that one in six U.S. hospital beds is in a Catholic hospital, along with other statistics on the prevalence of Catholic healthcare in the U.S., and alleges that because of this patients are victims of discrimination who are robbed of healthcare choices.

“The power of the public purse should be leveraged to ensure that facilities no longer withhold essential health care from patients,” the report states.

“We cannot stay silent and let hospitals use their religious identity to discriminate against, and harm, women,” it concludes, calling on the federal government through its Centers for Medicare and Medicaid Services (CMS) to issue a statement that denying emergency “reproductive health care” violates federal law, and also investigate Catholic hospitals for violations of the Emergency Medical Treatment & Labor Act (EMTALA).

Catholic leaders decried the initiative but were not surprised.

“The ACLU has long waged war on Catholics over the issue of abortion,” the Catholic League’s Bill Donohue said in a statement. “Now it has joined with Planned Parenthood to author a report that sounds the alarms over the “news” that one in six hospitals in the nation is Catholic-run.”

“The ACLU has repeatedly sued Catholic hospitals for allegedly violating the civil liberties of women, and it has repeatedly lost in the courts,” Donohue continued. “As proof, it cites the Church’s opposition to contraception, sterilization and abortion, and various directives issued by the bishops to Catholic hospitals. It continues to lose because the First Amendment guarantees religious liberty, a fundamental expression of which is the right of Catholic entities to maintain institutional autonomy.”

“Let us be perfectly clear,” Human Life International’s Director of Research and Training Brian Clowes told LifeSiteNews. “Both the American Civil Liberties Union (ACLU) and MergerWatch have one objective in mind: To force Catholic hospitals to perform abortions and sterilizations as a blanket policy.”

“They are both extremist pro-abortion organizations,” he said, “and their concern for women's health is only a cover.”

Clowes pointed out how the latest ACLU report employs the classic liberal tactic of heavily stressing the “hard cases,” something the ACLU used in its successful bid to help legalize abortion on demand in the United States.

The report’s examples of “emergencies” contain details that are deliberately vague or which are completely irrelevant, he said, in one example, where a woman suffering preeclampsia is refused sterilization by a Catholic hospital.

“The report conveniently omits the fact that sterilization does not cure or ameliorate preeclampsia even slightly,” said Clowes.

“The solution to this perceived problem is to educate doctors and medical staff at Catholic hospitals in the details of the bishop's Ethical and Religious Directives for Catholic Health Care Services,” he stated, “not to force them to act against their consciences and against their Faith, which the ACLU and MergerWatch seem to have no problem attempting to do.”