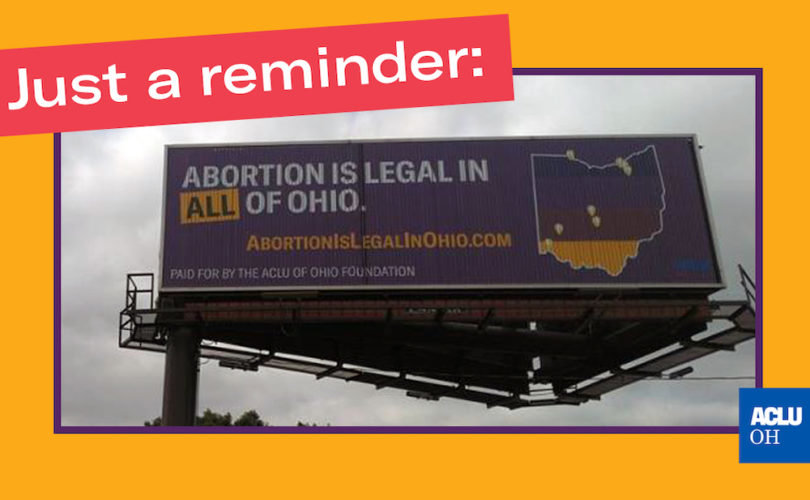 LEBANON, Ohio, July 27, 2021 (LifeSiteNews) – The Ohio chapter of the American Civil Liberty Union (ACLU) has raised an electronic billboard reminding citizens that abortion is legal in the state of Ohio, in a city that has been designated a sanctuary city for mothers and the unborn.

This past week, we placed a billboard advertisement in the Southern end of Lebanon with one simple reminder: Abortion is Legal in ALL of Ohio �� pic.twitter.com/cb9cQYqyiY

ACLU raised the sign in response to Lebanon’s unanimous May 25 vote to ban all abortions in the city. The law forbids providing an abortion, aiding in an abortion, providing money and transportation for an abortion, and offering instructions to procure an abortion. There are no abortion facilities in Lebanon, but the law would also apply to dispensing abortion pills by mail.

Physicians who violate the law would be punished with up to six months’ jail time and a $1,000 fine; pregnant women would not be charged.

“We are clearly saying in our community we do not think it is in our best interest to open a clinic or a hospital that does abortions,” Lebanon Mayor Amy Brewer said. “We are elected to make decisions based on what’s good for our community today.”

ACLU of Ohio legal director Freda Levenson said the unanimously-passed city law has little support and is unconstitutional: “The ordinance is blatantly unconstitutional and large portions of it are pure rhetoric.”

Levenson added that the ACLU is currently reviewing its legal options for filing a lawsuit against the ordinance, but for the moment the billboard is all the group has to show in its push for abortion in the pro-life city.

Despite the Biden administration’s support for expand the abortion industry by supporting removal of the ban on directly funding abortion in federal budgets, pro-life legislation continues to be passed across the country.

The Sanctuary City for the Unborn Initiative identifies over thirty cities which have adopted similar ordinances so far, primarily in Texas and Nebraska.