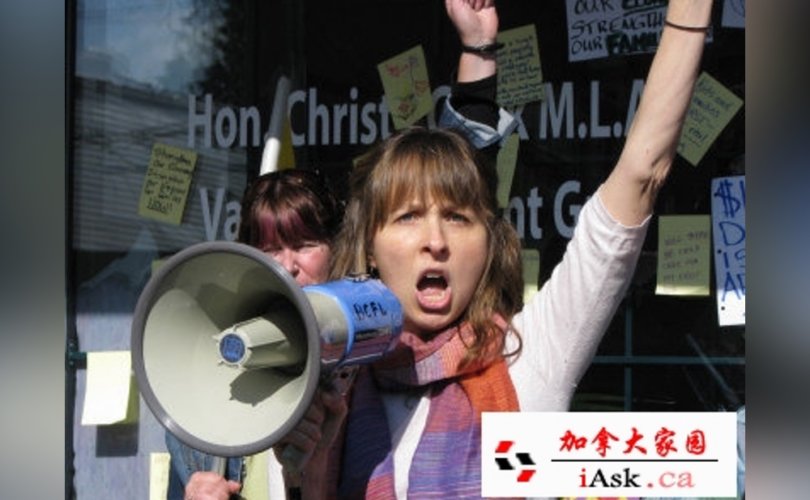 VANCOUVER, British Columbia, June 14, 2018 (LifeSiteNews) – A Canadian Human Rights Tribunal ruled that the “truth” of statements made by a Christian about a transgender political candidate’s biological sex is “not relevant” and cannot be used as a “defence” against allegations that the Christian was engaging in “hate” speech.

Christian and pro-family activist Bill Whatcott was hauled before the Tribunal last year on the grounds that he had engaged in “hate” speech for publicly exposing a transgender political candidate who claimed to be female, but who was born a biological male. The complainant, Mr. Ronan Oger, who now goes by Ms. Morgane Oger, was a candidate in the 2017 provincial election.

Oger is the Vice-President of B.C.’s New Democratic Party (NDP).

States court documents: “Ms. [sic] Oger was a candidate in the 2017 provincial election. During her [sic] candidacy, Mr. Whatcott distributed hundreds of flyers in her [sic] riding. The flyers were titled ‘Transgenderism vs. Truth in Vancouver‐False Creek.’ They described Ms. [sic] Oger as a ‘biological male who has renamed himself… after he embraced a transvestite lifestyle.’

“Ronan is running for the NDP in the Vancouver-False Creek riding and BC’s media and the NDP are promoting a false narrative that Ronan is a woman born into a male body,” the flyer explained.

“But the truth is Ronan’s DNA will always be male, he will never have a uterus, and no amount of cosmetic surgery, fake hormones, or media propaganda is going to be able to change those facts,” the flyer continued.

Whatcott stated in his flyer his concern “about the promotion and growth of homosexuality and transvestitism in British Columbia and how it is obscuring the immutable truth about our God given gender.” He called switching gender an “impossibility,” adding that it exposes people to harm.

Oger, who lost the election, filed a complaint with the B.C. Tribunal in May, 2017, alleging that Whatcott’s flyer was “discriminatory” and exposed transgender people to “hatred and contempt.”

When Whatcott and his lawyer attempted to defend the truth of the flyer, namely that Oger was, in fact, a biological male, Tribunal member Devyn Cousineau would have none of it.

Cousineau ruled that “the ‘truth’ of the statements in the flyer is not a defence.”

“Therefore, to the extent that Mr. Whatcott intends to call witnesses to establish the truth of his impugned publications, that evidence is simply not relevant to the legal issue and will not be heard by this Tribunal,” she wrote.

The B.C. Tribunal describes itself as an “independent, quasi-judicial body created by the B.C. Human Rights Code.” The Tribunal, composed of unelected members, is responsible for “accepting, screening, mediating, and adjudicating human rights complaints.”

Cousineau excluded in the case evidence that Oger is a biological male because she thought it “intrusive.”

“In my view, Mr. Whatcott’s requests are overly intrusive into Ms. [sic] Oger’s privacy and not at all relevant for the disposition of this complaint. Furthermore, the basis for the requests is questionable insofar as they are premised on Mr. Whatcott contesting that Ms. [sic] Oger is a transgender woman. That fact is the very foundation of his publications concerning her [sic] fitness for office.”

“And I am supposed to expect impartial justice from this leftist kangaroo, who believes the truthfulness of my statements is irrelevant?” he added.

Commenting on Oger’s record, LifeSiteNews asked Whatcott why he had concentrated on Oger’s claims to be female when he opposed Oger’s election campaign.

“Transvestitism (falsely called transgenderism”) is being pushed by the media and the leftist elites seeking to turn the once free and moral west into a sewer,” Whatcott replied. “The issue is much bigger than Ronan.”

“He simply happened to be the transvestite politician that everyone was pretending was a woman. I decided to speak truth to the matter and the rest is history.”

Whatcott believed that Oger’s medical records would have helped in the case as they would have testified to the truth that, as Whatcott stated in his pamphlet, Ogen is actually male.

“We now have a problem as the human rights judge explicitly stated the truth doesn’t matter,” Whatcott said.

1
Vatican official at Davos says the Church is implementing the World Economic Forum agenda
2
Full list: Abortion now banned in at least 10 states, more to follow
3
Students for Life president encourages crowds at Supreme Court to rejoice, work to ‘protect life in every state’
4
Global COVID tyranny has opened our eyes to the evil plans of the World Economic Forum
5
The pro-abortion movement is becoming so radical, it’s now leaving feminists behind
Subscribe to Daily Headlines »