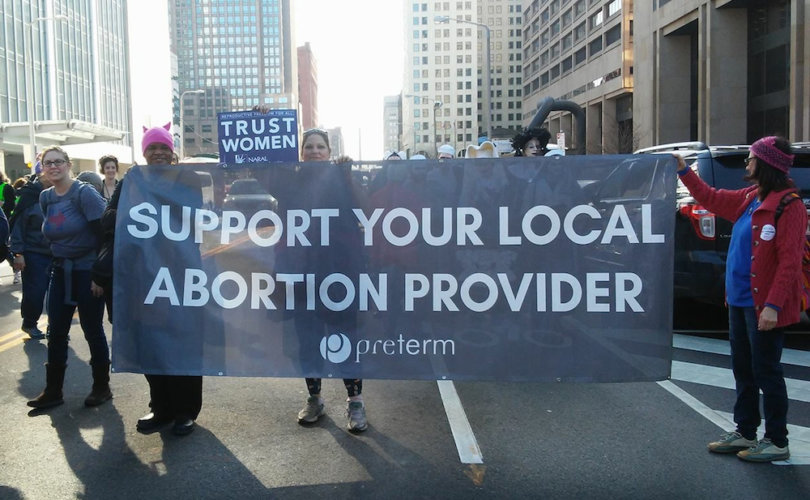 An independent abortion facility in Cleveland, Ohio, tries to drum up support. A 22-year-old woman bled to death there in 2014.

MINNEAPOLIS, Minnesota, September 13, 2017 (LifeSiteNews) — A pro-abortion organization is concerned that abortuaries are closing across the nation.

The Abortion Care Network (ACN), a coalition of independent abortion businesses, issued a report on the declining number of abortion centers. In the past five years, 145 independent “clinics” closed.

On a homepage titled “Communities Need Clinics,” ACN wrote that abortion businesses are closing at an “alarming rate,” particularly independent ones, that often offer late-term abortions.

Significantly, ACN admitted the effectiveness of pro-life laws in lowering the number of abortions and abortion centers across the country. They also cited other factors impacting the closures, including the activism of sidewalk pro-lifers and the states that disallow Medicaid tax dollars from being used to pay for abortions.

Geographically, Texas had the most closures with 20, Michigan and California were next with 15 apiece, followed by Florida with 11 and Ohio with eight.

The ACN is especially concerned that late-term abortions are dwindling. “Clinics that provide abortion care beyond the first trimester of pregnancy are particularly vulnerable to closing,” the report stated. The pro-abortion organization explained that independent clinics are more likely to commit later abortions

Eight states, including Arkansas, Kentucky, Mississippi, Missouri, North Dakota, South Dakota, West Virginia, and Wyoming, have only one abortuary left. Kentucky could become the first state in the union to be abortion free if women’s safety laws are upheld in a current court challenge.

EMW Women’s Surgical Center in Louisville is fighting for its business against a state law protecting women's health. Kentucky requires surgical abortion facilities to have the same basic safety equipment as any other surgical facility, and that abortionists have a contractual relationship with a local hospital in case a woman needs emergency care.

The American Civil Liberties Union claimed that the women’s safety laws are unnecessary and that closing EMW would cause “drastic” harm to Kentucky women.

Not having such laws in place caused the death of 22-year-old LaKisha Wilson in 2014. She had an abortion on the third floor of Cleveland's Preterm clinic and bled to death waiting for a broken elevator — already too small for her to be intubated on her gurney — to get her out to an ambulance.

Similar pro-life laws in Texas were overruled last year by the U.S. Supreme Court because they might limit abortion “access.”

Those 2013 laws led to half the state's abortion businesses closing because of unsafe conditions, such as the ones that killed Lakisha Wilson. The legislation also resulted in a huge drop in abortions and more women giving life until the nation's highest court nixed it.