In a Facebook posting yesterday, the Texas Alliance for Life confirmed with Lt. Gov. David Dewhurst that the Senate would take up the abortion measure on Friday, July 12.
By Operation Rescue staff

AUSTIN, TX, July 11, 2013 (Operation Rescue) - Sweeping new abortion legislation, which could close over 35 abortion clinics and protect babies after 20 weeks' gestation, was approved in a final vote in the Texas House yesterday and is now set for a showdown in the Senate on Friday.

After yesterday’s vote, mayhem broke out amongst pro-abortion protesters, forcing troopers to remove them from the gallery. Five of the boisterous protestors were arrested and held in custody for five hours but were not charged.

In a Facebook posting yesterday, the Texas Alliance for Life confirmed with Lt. Gov. David Dewhurst that the Senate would take up the abortion measure on Friday, July 12. The group has asked that pro-life supporters wear blue and arrive early to pack the gallery for the Senate debate and vote.

The bill, known as HB 2, would ban abortions after 20 weeks, tighten regulations on the dispensing of abortion-inducing drugs, require that abortion clinics meet ambulatory surgical center standards, and mandate that abortionists maintain hospital privileges within 30 miles of their clinics.

The legislation was brought in a second special session in response to revelations of illegal late-term abortions resulting in babies being born alive then intentionally murdered during the Kermit Gosnell trial in Philadelphia and allegations made by three former Houston abortion clinic workers that similar horrors occur in Texas by abortionist Douglas Karpen. 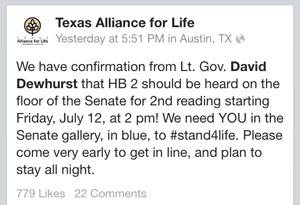 The Senate debate is being closely watched after a vote there during a previous special session was thwarted by a filibuster by pro-abortion Sen. Wendy Davis, followed by chaos created by an angry mob of abortion supporters who essentially rioted in the gallery.

“This legislation is so important that Gov. Rick Perry called a second special session to make sure that the women and babies of Texas are protected from Gosnell-like conditions and practices,” said Cheryl Sullenger, senior policy advisor for Operation Rescue, who was present in the Capitol in Austin earlier this week. “Closing dangerous abortion clinics that cannot or will not comply with basic safety standards only makes sense. It is shocking that some are working so hard to put convenience and profit above the lives and health of women and babies that can feel pain."

"This bill will save untold lives and spare women from being subjected to substandard conditions and barbaric practices,” she said.

Operation Rescue also uncovered widespread abortion abuses at Texas clinic during an undercover investigation in 2011, which led to fines and discipline. Operation Rescue exposed Houston abortionist Douglas Karpen and worked with four of his former employees who blew the whistle on his Gosnell-like late-term abortion practices and released photographic evidence that illegal late-term babies were being killed by having their heads twisted from their bodies.