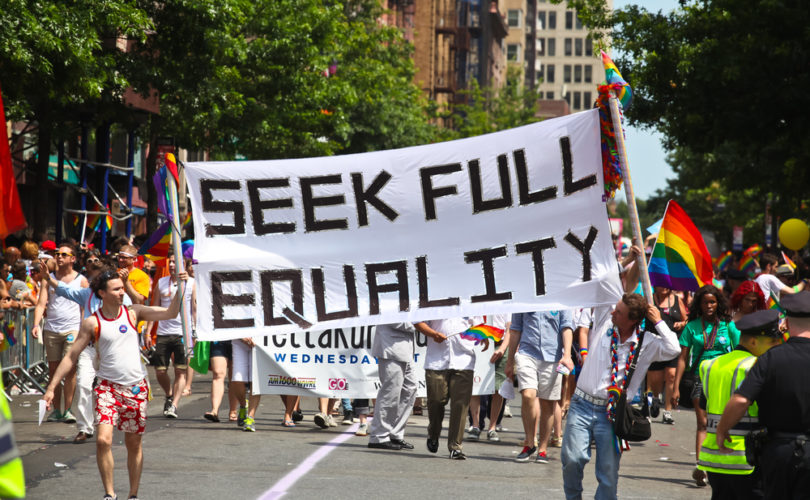 An international homosexualist advocacy group presented a workshop to students in an Ottawa Catholic high school last March that focused on “LGBT acceptance” and “different sexualities and genders.”

Students in St. Matthew High School in the Ottawa Catholic School Board organized an educational day March 28 titled the “Healthy Minds Initiative” in which they invited PFLAG (Parents, Families, and Friends of Lesbians and Gays) to give a workshop.

PFLAG, with hundreds of chapters around the world and 60 in Canada, exists to advance “equality and full societal affirmation of LGBT people through its threefold mission of support, education, and advocacy.” It has been a leading proponent of same-sex “marriage” and homosexual adoption. It also opposes abstinence-only education.

According to the school’s newsletter, PFLAG’s workshop “focused on the acceptance and inclusion of the LGBT community.”

“Their workshop had examples of different sexualities and genders that weren’t that common. They gave the students ideas on how to be accepting of those who identify as LGBT,” stated the newsletter.

Other workshops during the day included one about “healthy relationships and what it means to give consent.” Another from local school psychologists was about coping with stress and included “meditation and yoga” activities.

LifeSiteNews asked the Ottawa Catholic School Board why an organization that advocates for positions contrary to Catholic teaching on sexuality, chastity, and marriage was allowed to instruct children in a Catholic school, but did not receive a response by press time.

The event was funded by United Way, which gave four students $1,500 in 2012 to organize the event, according to the school’s newsletter.

United Way Worldwide is a charitable organization — with local branches in 40 countries — that exists to raise money to address community issues and problems. It “embraces inclusiveness, diversity, and equal opportunity as part of our core values,” the organization states on its website, adding that it is “dedicated to leading the United Way movement on the issue of inclusion.”

The organization has put its money where its mouth is, with numerous local U.S. branches pulling funding from groups like Boy Scouts of America for its national scouting policy banning same-sex attracted Scoutmasters.

United Way has been criticized by life-and-family leaders for funding programs delivered through abortion giant Planned Parenthood. The organization responded by saying it takes a “position of neutrality” on the killing of pre-born children in the womb because it does not want “any single topic to overshadow our mission to improve lives.”

The Ottawa Catholic School Board states that the “Gospel of Jesus Christ, as expressed in scripture and Church tradition, is at the centre” of its education. Despite this, the board continues to defend partnerships with anti-life-and-family organizations, send students on international trips to visit pro-abortion/prostitution groups, give students credit for working at a gay activist group, praise students for pro-gay artistic creations, and provide health coverage for employees that includes contraception and abortifacients.

The board’s allowing of problematic groups into its schools is having an effect on students.

Earlier this month students from Notre Dame High School debuted a video titled “In Love and In Danger,” which, according to a school board press release, “encourages young people to develop healthy relationships.”

At one point in the video, a student says: “Stop making people feel guilty or inferior for having sexual behaviors or desires that may be different than yours.”