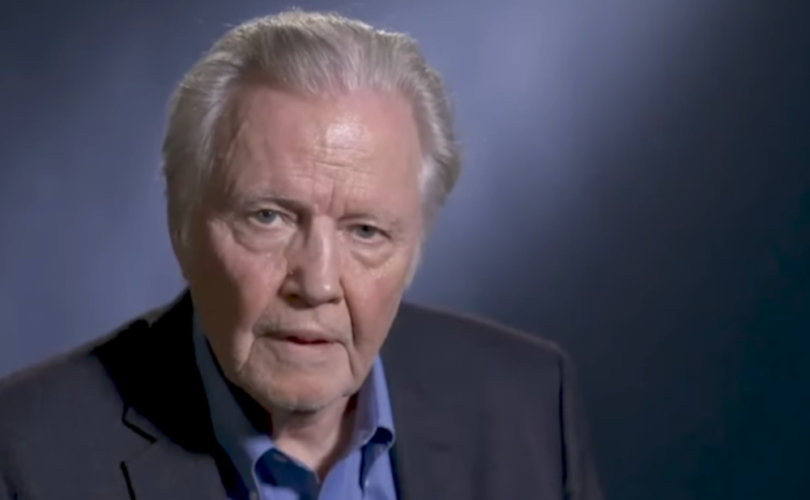 November 18, 2020 (LifeSiteNews) – Academy Award winning actor Jon Voight in a video called on Americans “of all colors, races, and religions” to “fight now for Trump’s victory … as if it is our last fight on Earth.”

In a low, even tone, the 81-year-old Hollywood star with a long list of acting roles in major motion pictures, called the current controversy over massive election fraud, as well as media propaganda, “our greatest fight since the Civil War: The battle of righteousness versus Satan, yes, Satan, because these leftists are evil, corrupt, and they want to tear down this nation.”

“I stand here … disgusted with this lie, that Biden has been chosen. As if we all don’t know the truth,” he said.

“The ones who are jumping for joy now, are jumping toward the horror they will be in for, because I know that the promises being made from the left to the American people will never come to be,” he continued.

“We must fight this corruption that is taken over, and fight for the good that seems lost,” said Voight, the father of famous actress Angelina Jolie.

Voight, who was raised Catholic and portrayed St. John Paul II in a 2005 miniseries, concluded, “Let us give our trust to God, and fight now for Trump’s victory because we all know this ballot count is corruption like they [the leftists] are. So, let us not back down, let us fight this fight as if it is our last fight on Earth. As Muhammad Ali said, ‘It’s not over until the last punch you have.’”

Voight’s comments come after numerous reports of how Democrats in swing states pursued policies to undermine election integrity, which resulted, according to Trump attorney Sidney Powell, in “massive and coordinated” voter fraud, an “effort to steal this election from we the people of the United States of America.”

We all know the truth pic.twitter.com/Jf2UXj1Vn0

In a November 6 statement President Trump said, “We believe the American people deserve to have full transparency into all vote counting and election certification, and that this is no longer about any single election. This is about the integrity of our entire election process … We will pursue this process through every aspect of the law to guarantee that the American people have confidence in our government. I will never give up fighting for you and our nation.”