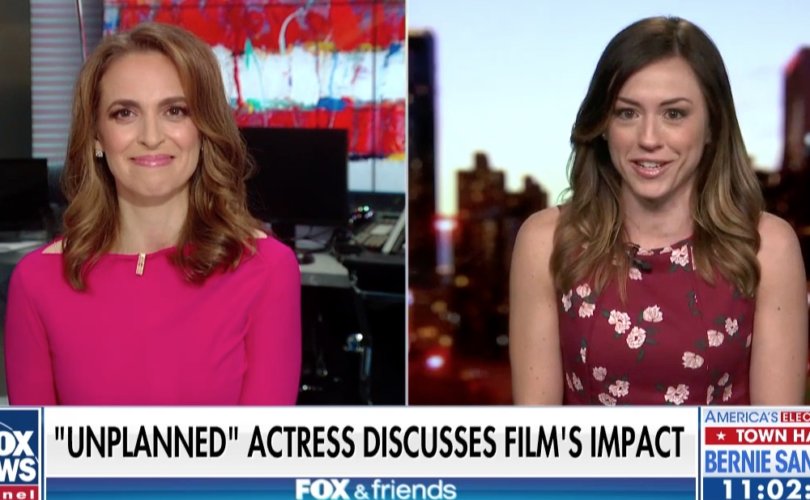 April 12, 2019 (LifeSiteNews) – The new film about pro-life activist Abby Johnson’s conversion story has already made a tremendous impact on women contemplating abortion in the real world, according to the actress who portrays Johnson.

Unplanned tells the real-life story of Johnson, a former Planned Parenthood abortion facility director who converted to the pro-life cause in 2009. Johnson has since exposed numerous details about the inner workings of the abortion industry, and now leads And Then There Were None, a nonprofit dedicated to helping people leave the abortion industry.

If someone could just make a mashup of me crying on Fox News, that'd be great. ����❤️https://t.co/dAUEinS8H3

“The response had been incredibly positive,” star Ashley Bratcher told Fox & Friends on Monday. “I mean, through it all – this has been the most rewarding and fulfilling role I’ve ever had in my entire career. To be able to hear someone come up to you and say, ‘I was so affected by your work that I decided instead of having an abortion, that I’m now going to have my child’ – I don’t know how to really explain the way that feels to know that you could potentially just saved a life. There’s not a lot of actors who get to say that, and I am so honored to be able to have a part of this.”

They discussed the various messages Bratcher has received from people who reached out to her about the film, with the host sharing an additional message from a viewer: “I saw Unplanned opening weekend with my mom and grandma but today I took a friend who was considering aborting her baby,” it read. “After this movie she has fully committed to keeping her baby and she says she can’t stop thinking about this movie and that everyone should see it. Praise God!!”

Every single day I’m receiving messages just like this one. This role was worth it all. ��❤️ @UnplannedMovie pic.twitter.com/awwAqKBfIV

“Yeah, I think I cry every time I talk to you guys. But, I can’t help it because it’s so incredible. It’s literally so incredible that people are being affected this much – this is why we did this movie,” Bratcher said. “And not only that, but being able to share my story with you guys – it’s not only the movie, but being able to share my heart and the fact that I care so much and that, we really do want to help women that we’re here to walk alongside of them.”

Participating in Unplanned also carried personal significance for Bratcher, who told LifeSiteNews in February that shortly after she was cast, she learned her mother had almost aborted her but ultimately chose life at the abortion center.

“Here I was in Oklahoma, on set to tell one of what I think is the greatest pro-life stories of our time, and I never knew,” she told LifeSiteNews at the time. “So it was so evident to me and I still just feel so overwhelmed when I tell it because I believe that God plans our steps from conception.”

Over the weekend, a series of 166 candlelight vigils outside Planned Parenthood locations across the country inspired by Unplanned were estimated to have attracted more than 10,000 participants, many of whom were reportedly new to pro-life activism.

Despite stiff resistance from the mainstream media, Google, Twitter, and the Motion Picture Association of America, Unplanned has kept its place in the U.S. box office top 10 for the first two weeks of its release, and has made $15.7 million as of April 14. More details about the film, including where to see it, can be found on its official website. It is rated R for its intense depictions of abortion, but contains no profanity, nudity, or sex.