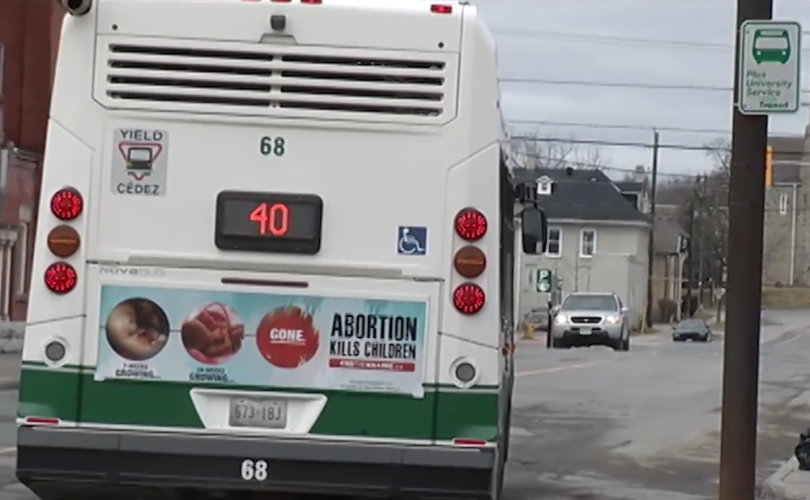 Advertising Standards Canada sent a letter Wednesday to the Canadian Centre for Bioethical Reform, saying it had assessed the ad in response to 71 complaints and found it violated the “code of advertising standards.”

Those complaints seem to have been generated at the request of Liberal Status of Women Minister Maryam Monsef, MP for Peterborough-Kawartha, according to the Peterborough Examiner newspaper.

The minister issued a statement Wednesday commending people for doing as she asked.

“I understand that Advertising Standards Canada is committed to responsible industry self-regulation and I look forward to the resolution of this matter.”

But CCBR’s lawyer Carol Crosson says her client won’t be complying with the edict.

“Ad Standards Canada is a private regulator of advertising and it provides guidance,” she told LifeSiteNews.

“It has no legal power to enforce its guidance and it self-admittedly does not consider the Charter right to freedom of expression.”

More significantly, the CCBR won the right to run the ads in court in a battle dating back to 2016, when the city first refused the ad.

“The City of Peterborough legally settled with CCBR and agreed to post the ad,” Crosson said.

Not only that, but the Ontario Divisional Court “ruled that CCBR had a constitutional right to post the ad, and that a refusal to post it was a breach of its Charter 2b right to expression,” she said.

Jane Feasby, vice president of Ad Standards Canada, wrote in the May 24 letter that the images could “upset” children and alleged the ad is misleading because it implies abortions are “routinely performed” at 16 weeks gestation.

The pro-life ad “displayed obvious indifference to conduct or attitudes that offend the standards of public decency prevailing among a significant segment of the population,” Feasby wrote.

ASC requested that CCBR “confirm by June 2, 2017 that this advertising will be permanently withdrawn or appropriately amended without delay.”

If not, it will go to the City of Peterborough and request it remove the advertising.

But Crosson reiterated that “of course, my client will not be responding or complying.”

“There might be individuals who don’t like the ad, and Ad Standards Canada might prefer that the ad is not up, but my client has a constitutional right to put the ad up and the city legally settled and agreed that it would post its ad,” she told LifeSiteNews.

Every individual in Canada has a constitutional right to freedom of expression, Crosson added.

“It would be my fond hope that anyone who has a desire to share a message in Canada, instead of trying to muzzle others, would simply share their message. It’s a democratic society.”