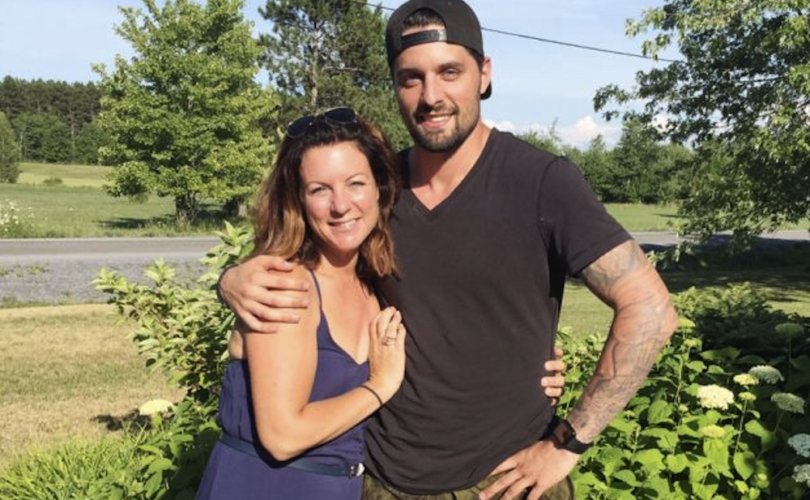 CHARLOTTETOWN, Prince Edward Island, July 20, 2016 (LifeSiteNews) – After years of searching, a young Canadian man given up for adoption as a baby has located his birth parents and thanked them for giving him life.

“They never saw me as a mistake,” Francis Menard said. “They made a decision that was best for me at the time.”

Menard’s story highlighting the blessing of adoption unfolded recently in the local media.

“A lot of people would have (chosen) abortion,” Menard said, “but they put me first, to put me with a family to get the best I could possibly get.”

Menard, who is a student and hockey player at Saint Mary’s University in Halifax, Nova Scotia, was born in 1992 at Queen Elizabeth Hospital in Charlottetown, Prince Edward Island.

He looked for his biological parents for six years without success and became discouraged, The Guardian reports. Menard got in touch with the news outlet in the last few weeks thinking that publishing his story might help in the search.

In less than two hours after it posted online, Menard heard from his birth mother via email.

Melanie Cantwell was a high school student when she became pregnant with Menard, who was two months old when an Ontario family adopted him.

“I have found the love of my life when we found each other,’’ Cantwell said after meeting her son for the first time. “There is nothing ever that could top this.’’

“Oh, my gosh, it felt like home,’’ continued Cantwell, who now lives in Toronto. “It was like I found my home, the warmth and the love he has shown me from the first email I can’t believe. There is absolutely no way I could want any more in who Francis is.”

While she and Menard’s father, Alan MacQuarrie of Crapaud, a village on Prince Edward Island, did not stay together, they have remained friends, and the young man was able to meet his father as well.

Menard was nervous enough about the meeting with MacQuarrie that he had to pull over on the way after crossing the Confederation Bridge, which links Prince Edward Island with mainland New Brunswick.

“I got a little anxious and nervous,” Menard said. “I had to stop and take a walk. Once we met, it was good. It was like meeting someone for the first time but having that instant bond.”

His father is a fisherman out of the Prince Edward Island seacoast village of Victoria-by-the-Sea, and had first gotten word about Menard via a text while he out on the water with his crew.

“All of a sudden I’m sitting (on the boat) crying,” MacQuarrie recalled. “The boys looked at me like I was (crazy).”

MacQuarrie likewise was anxious about meeting his son for the first time.

“He was nervous, I was nervous, but he came in and fit right in,” MacQuarrie said, expressing gratitude for his son seeking him out.

“(Menard is) probably the best thing that has happened to me in 20 years, that’s for sure,” he continued. “You always wonder if you did the right thing, us being so young at the time. It was so hard.”

MacQuarrie’s wife Stefanie knew about Menard all along. However, MacQuarrie had not told the couple’s two young children about their half brother until right before they met him, and both children were excited.

Cantwell explained that while she and MacQuarrie knew an Ontario couple adopted their son, they didn’t want to impose and so they never tried to contact them. And while they hoped he would look for them one day, they didn’t realize the adoption they thought was open had closed.

“I was so afraid that he would hold anger or resentment and have confusion,” Cantwell said.

She added that they never “gave” their son up for adoption but “gifted” him.

Menard’s birth parents still remember holding and loving their son in the hospital, and they also never forgot what it felt like to let him go.

Menard’s adoptive mother, Martine Chartrand, said she told Menard as soon as he could understand that he was adopted and wholly supported his search for his birth parents.

Chartrand and Cantwell have met as well.

“Francis could not ask for a better birth mom,” Chartrand said. “I also contacted Francis’ dad and he’s such a great man. We are so privileged and blessed.”

The two women connected personally right away and they have already started to work on a book about the story.

“I can tell you it’s going to be a best seller,’’ Chartrand said. “We are also thinking about a movie.”

“Why not?” she asked. “If we can show people how positive adoption can turn for every part.”

The last few weeks have been unlike anything he has ever experienced, Menard said, both reunions full of lots of tears and hugs.

“It has been an emotional ride,” he recounted. “It’s been pretty crazy, a good weird.”

“They were both very welcoming, very open and generous,” he said of his birth parents. “After (I met my birth father), I went to see my maternal grandmother and there was a lot of catching up to do.”

“It has been a dream come true,” Menard continued. “Everyone has been so open and supportive. It was an easy transition and very overwhelming.”

Recollecting those six years seeking his birth parents, Menard said he was on a mission to thank them for choosing adoption.

“It was one of the hardest things they could ever have done, but it was best for me,” he said. “I think what they did was incredible.”