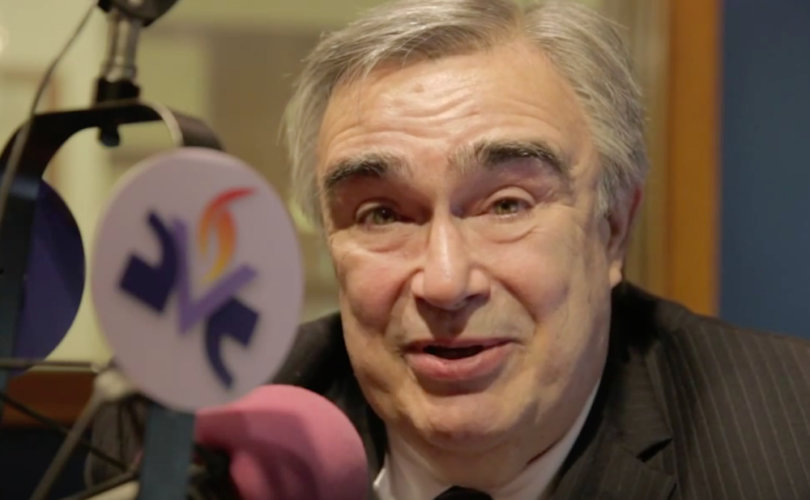 Fernandez speaks for the Pope

In an recent article published in a Latin American theological journal, Fernandez maintains that Pope Francis has “in a discreet way” allowed for remarried Catholics to receive Holy Communion. He argues that the Pope confirmed this position in 2016 when he supported the Argentinian bishops’ pastoral statement.

Fernandez alleges that Francis has introduced a wider pastoral discernment in the realm of the internal forum regarding the reception of communion, and that Amoris Laetitia footnote 351 was the vehicle through which he accomplished this.

The Archbishop also railed against what he called a “small but hyperactive” group of critics of the Pope for being “oligarchic” ethicists guilty of “intellectual Pelagianism.”

Fernandez was appointed rector of the Pontifical Catholic University in Buenos Aires by then Cardinal Jorge Bergoglio in 2009. He is believed to be the primary ghostwriter of Amoris Laetitia.

Both Kresta and his guest seemed puzzled by the Archbishop’s comments. Kresta described them as taking a “kind of cavalier” approach to the papal magisterium. Bunson said Fernandez presents a “convoluted argument” that raises almost as many questions as he tries to put to rest.

Bunson then wondered: “How can you discreetly exercise the papal magisterium when by its very nature it involves the entire Church and world?”

Kresta agreed. “Exactly! And that’s the reason [there] should not be this universal discussion about [communion for the divorced and remarried] because it’s impossible to have this kind of very delicate, surgical, pastoral exception when you’re trying to make it some sort of universal principle. It can't be done.”

Bunson, who also writes for the National Catholic Register, observed that the Church has “a very, very narrow set of grounds” that would “almost absolutely exclude the vast majority of couples” who are divorced and civilly remarried from receiving communion.

Kresta concurred, confidently stating that 99.9 percent of situations involving divorced and remarried Catholics “fall clearly under the objective and absolutely clear teaching of the Church.” He also stressed that Catholics must follow their conscience but that their conscience must first be informed by truth.

Bunson also commented on the fracturing taking place within the Church as a result of the pope’s desire for synodality.

“We see under Pope Francis an effort to give wider latitude to episcopal conferences and to the bishops. But here where we have a case of clear practice but also of moral law as well as in this case also canon law, we begin to see the problem of that.”

We have “in one country such as Poland one perspective and in Germany right next door we have another one. And this has been really the problem from the very start with Amoris Laetitia.”

Kresta reiterated that the teaching of the Church as laid down by John Paul II in Familiaris Consortio has been clear for decades on who can and who cannot receive communion. Divorced and remarried Catholics, with only the slimmest of exceptions, are simply not able to participate.

There are “very clear statements” on the reception of communion in John Paul II’s Reconciliatio et Paenitentia as well, Bunson added.

Kresta concluded his program by defending the Church’s timeless teachings in a forceful monologue:

Let me make it abundantly clear that the basic framework on the Church’s moral and sacramental teaching is unchanged. Objectively speaking, it is always, I want to stress, always a grave sin to have sexual relations outside of marriage, and all the more so when one party is validly married to someone else — that’s adultery. This would be the case with those who are validly married in the church but end up civilly divorced and “remarried” without annulment.

Stress again, subjectively, one’s own conscience can never make what is objectively wrong subjectively permissible. If one is guilty of mortal sin … it’s not permissible to receive Holy Communion without first receiving sacramental absolution, and that requires a firm purpose of amendment, that is, to change one’s place.

Alright, now there is very clear teaching that sometimes people are unaware that a particular sin is grave or mortal. And because of that they may not be culpable of mortal sin. That doesn’t change the fact that it’s mortal sin. It simply changes your subjective guilt. Questions on this should be addressed by a good local priest and by the bishop. You can also read John Paul II’s work Familiaris Consortio and Reconciliatio et Paenitentia.

… the Church reaffirms her practice, which is based upon Sacred Scripture, of not admitting to Eucharistic Communion divorced persons who have remarried. They are unable to be admitted thereto from the fact that their state and condition of life objectively contradict that union of love between Christ and the Church which is signified and effected by the Eucharist. Besides this, there is another special pastoral reason: if these people were admitted to the Eucharist, the faithful would be led into error and confusion regarding the Church’s teaching about the indissolubility of marriage.

Reconciliation in the sacrament of Penance which would open the way to the Eucharist, can only be granted to those who, repenting of having broken the sign of the Covenant and of fidelity to Christ, are sincerely ready to undertake a way of life that is no longer in contradiction to the indissolubility of marriage.