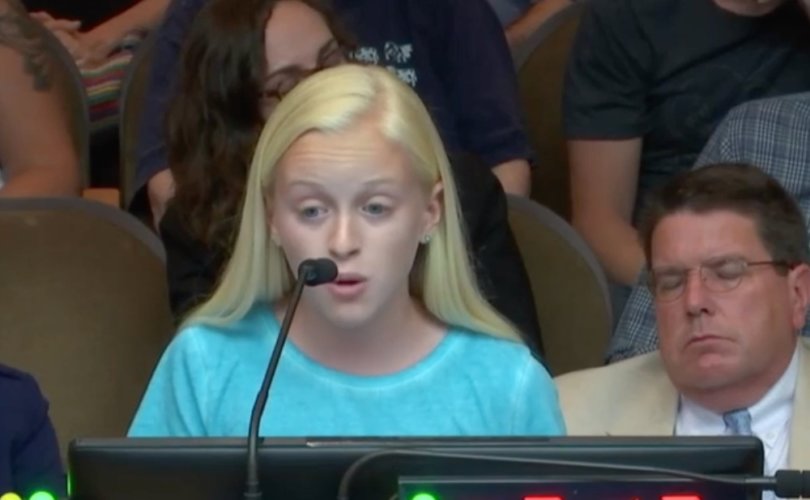 June 10, 2019 (LifeSiteNews) – A 13-year-old girl’s plea to end abortion in her city at a recent city council meeting was met with shouts, jeers, and tears, as citizens reacted to her comparing abortion to slavery.

Addison Woosley, 13, spoke during the June 4 Raleigh, North Carolina city council meeting, at one point having to raise her voice over jeers from the audience, the Charlotte Observer reports, some of whom took issue with her recalling past injustices against African-Americans.

Woosley did not mince words when asking city leaders to make abortion illegal in Raleigh.

“I strongly believe that abortion is murder,” Woosley said. “I also believe murder is wrong, so I’m here to ask you to make abortion illegal here in Raleigh.”

“Abortion should be illegal because it’s murder,” she said. “The definition of murder is the killing of one human being by another without justification and often with intended malice.”

“When mothers choose to slaughter their innocent babies,” said Woosley, “they already have fingerprints, noses, they can recognize their mom’s voice, they can hiccup, and their heart is beating.”

“There’s no way around it,” the teen stated. “Abortion is murder.”

“So why is it,” she asked, “if an infant is destroyed before birth, there’s no problem, but if killed after birth it’s considered a brutal murder?”

The meeting was at least the third time that pro-life supporters had asked the council to make Raleigh a “sanctuary city for the unborn,” the Observer report said.

Parts of the crowd, some who attended to request extra police oversight, interrupted Woosley and other pro-life speakers, taking issue with their alleged speaking on behalf of black people and women.

“Abortion reminds me of slavery,” said Woosley. “Owners said that their slaves were their property and they could do whatever they wanted with them, just how moms say about their babies.”

She added, “My hope is that in a few years we’ll look back at abortion and think, ‘That was so cruel, I can’t believe we did that, just how we all look back at slavery.’”

As Woosley continued as the shouts escalated.

“The question is, who will you be, the slave owner, the man nailing the ‘whites only’ sign on the water fountain, Rosa Parks, or Abraham Lincoln?” queried Woosley. “Who are you going to be?”

“Make a choice,” she said. “Are you choosing to be like the plantation worker flogging the little black child or are you going to protest even if it costs your life like Martin Luther King, Jr.?”

“If you think abortion should be legal would you please stand up?” exhorted Woosley. “We need to change the law to change the world, so let’s stand up and do it.”

A woman in the audience repeatedly shouted, “Y’all are so disrespectful. Let black people speak for black people when we are in the room. We can speak for ourselves.”

“You are a black man,” the woman then said to Mayor Pro Tem Corey Branch. “You need to stand up and recognize.”

Branch called for order continually before the crowd quieted.

“So, yes, I am a black man,” he said. “And, yes, everyone who signs up has a right to speak. That is the rule of the land. I can’t come up here and say you can speak or you can’t speak.”

He cautioned people to address their comments to the council and not others in the audience.

Some of the other pro-life speakers had been shouting back at those interrupting Woosley, according to the Observer.

A man filmed a woman sitting near the pro-lifers with his cell phone. She flipped him off, stating, “right here, pal,” before police removed her out from the room. The woman was later allowed to return.

There were a number of children with the pro-life speakers, and one boy cried in his seat as people yelled at each other.

The final pro-life speaker, David Buboltz, wore a shirt with an unborn child on it that read, “I am going to be murdered tomorrow!”

Council member Stef Mendell turned her chair away from Buboltz as he spoke.

As he concluded his comments, she left the room, telling the press after the meeting she didn’t “appreciate being preached to” and that she thinks abortion should be rare, safe, and legal. Outlawing abortion will mean illegal abortions that are more dangerous, Mendell claimed.

“It is a free country and everyone has the right to speak and say what they want to say,” she said. “But by the same token I have the right to not listen to what I don’t want to.”

On April 18, North Carolina Democrat Gov. Roy Cooper vetoed legislation that would have required abortionists to give basic medical care to newborns who survive failed abortions, days after the measure passed the state legislature.

The North Carolina Senate approved Senate Bill 359 on April 15 and the state House approved it the following day.

The law would have required infants born alive after attempted abortions to be guaranteed the “same claim to the protection of the law that would arise for any newborn, or for any person who comes to a hospital, clinic, or other facility.” Violators would have been guilty of a Class D felony and face a fine of up to $250,000.