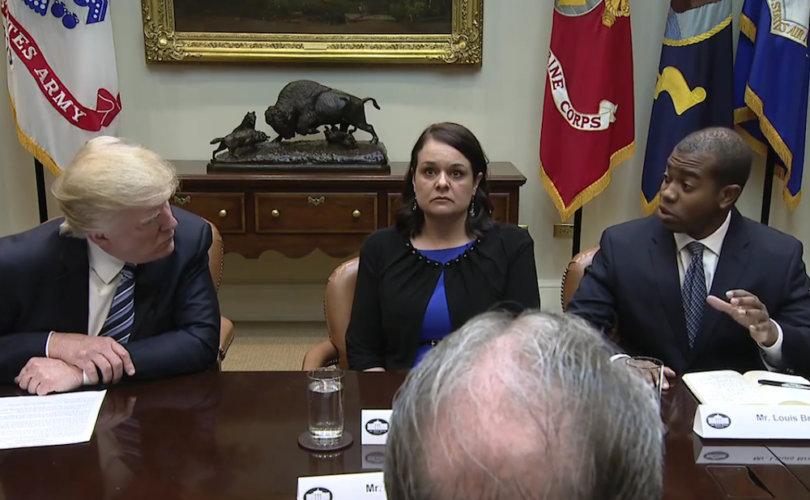 WASHINGTON, D.C., March 24, 2017 (LifeSiteNews) – An ordinary American citizen negatively affected by Obamacare reminded President Trump recently that taxpayer dollars should not fund abortion and that any civil right is false without the right to life. See video from 13:07 onwards.

“I know from St. John Paul II, he said that all of our human and civil rights that we believe in as Americans — that we share as American, the right to healthcare, the right to medical care, to housing, to all of these different things – are illusory if the right to life isn’t defended with maximum determination,” Louis Brown said during a recent healthcare listening session with Americans hurt by Obamacare.

Brown, a 35-year-old attorney from Virginia, described how he left his job with the Democratic National Committee (DNC) in 2009 when the Affordable Care Act was going through Congress because he saw how former President Obama’s signature healthcare law would promote taxpayer-funded abortion.

He is now the director for the Christ Medicus Foundation. The Catholic healthcare foundation focuses on building a culture of life, protecting conscience rights and religious liberty in healthcare, opposing public funding of abortion, and fighting discrimination against pro-life medical providers.

Brown also noted as an African American the significant loss of life from abortion among the African-American community.

Brown told President Trump that he supported him in the election and had given speeches about voting pro-life. And he used that as a segue way to encourage Trump to continue working to cease taxpayer funding of abortion along with efforts to show that human life takes precedence in healthcare.

“I’m really happy that you’re here, to continue the bipartisan belief that there should be no taxpayer funding of abortion,” he said. “And also really to support your efforts to show that the patient, the human person, should be at the center of our American healthcare system, not the government. The government has its place, but the patient should be the center.”

The listening session occurred on the heels of the debate over the American Health Care Act.

Trump campaigned heavily on the promise to repeal and replace Obamacare amid the healthcare takeover’s significant violation of religious liberty for those opposed to subsidizing abortion and contraception.

In addition to philosophical objections to Obamacare, its actualization has also resulted in skyrocketing premiums and many Americans losing insurance because of the law’s unsustainability.

On Friday afternoon, Republicans pulled the bill from consideration in Congress. Many conservative Republicans think it does not go far enough in reversing the damage of Obamacare.