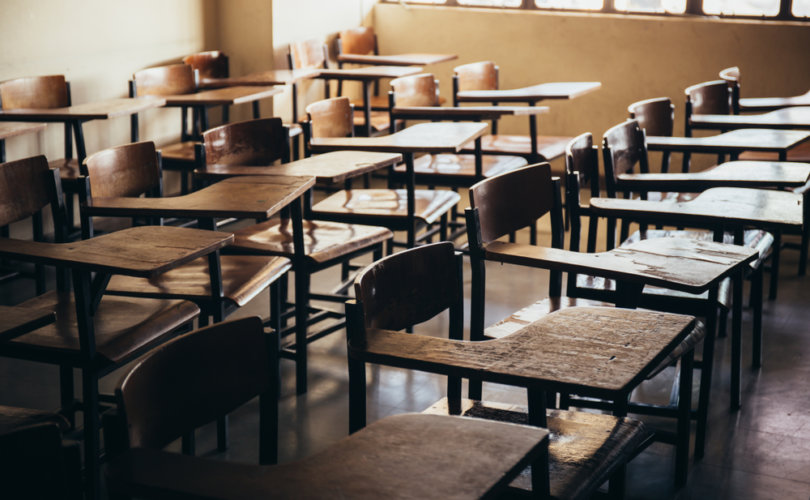 UNION, New Jersey, February 6, 2018 (LifeSiteNews) — A high school teacher was suspended for three years for sharing her views of homosexuality on a personal Facebook page.

An ordained minister, Knox communicated her opinion openly on social media. In 2011, she criticized an LGBTQIA+ promotion featured in the school’s display glass. “Why parade your unnatural immoral behaviors before the rest of us?” Knox posted.

“Homosexuality is a perverted spirit … I know sin and it breeds like cancer,” Knox, 56, commented. Sodomy is “unnatural immoral behavior” that is “against the Nature and Character of God.”

Those comments got Knox in hot water with the school district.

“We do not have to accept anything, anyone, or any behavior or any choices!” she expressed in all-caps to emphasize her constitutional freedoms. “I do not have to tolerate anything others wish to do.”

“I do have to love and speak and do what’s right!” she admitted, again in all-caps.

Knox was summarily charged with conduct unbecoming a teacher and suspended without pay. Later, school officials filed tenure charges against her to take away her job security in order to fire her.

Included in the school charges were allegations that Knox alerted school officials via email that homosexual teachers were “targeting young and impressionable students for indoctrination into alternative sexual lifestyles.” Knox denied sending the emails.

In 2013, Knox sued the district for violating her right to free speech and her right to the free expression of her religion. She wanted her job back with back pay and the admission that she was within her rights under the Constitution to express her views on Facebook.

“These Facebook posts that she made were done on her time, at her home, after school hours, on her home computer, and it was addressing a matter that could arguably be of big societal concern,” Knox attorney Demetrios Stratis said.

“Her personal beliefs are what they are. They are her Christian values and that has nothing to do with hate,” her sister, Wanda Leake, said.

“They’re vilifying her. If they knew her they would not do that,” her husband Gene said.

The American Civil Liberties Union of New Jersey admitted that though they did not approve of Knox’s Christian beliefs, “her beliefs and comments are protected by the First Amendment.”

Eventually, the schoolteacher reached a confidential settlement on the tenure issue. The board used that against her, arguing her lawsuit was moot because she settled on the tenure issue, but in 2015 U.S. District Court Judge Kevin McNulty allowed her suit to go forward.

Meanwhile, the New Jersey Department of Education voided her teaching certificates.  Knox appealed and bargained for compromise to a three-year suspension.

The state agreed last month and has suspended Knox’s certification as an elementary and  nursery school teacher and as a special ed teacher for handicapped students.

The three-year suspension agreement specifies Knox “did not admit or concede to the truth of allegations.”

Teachers who qualify for a disability pension receive about 43 percent of their average salary.