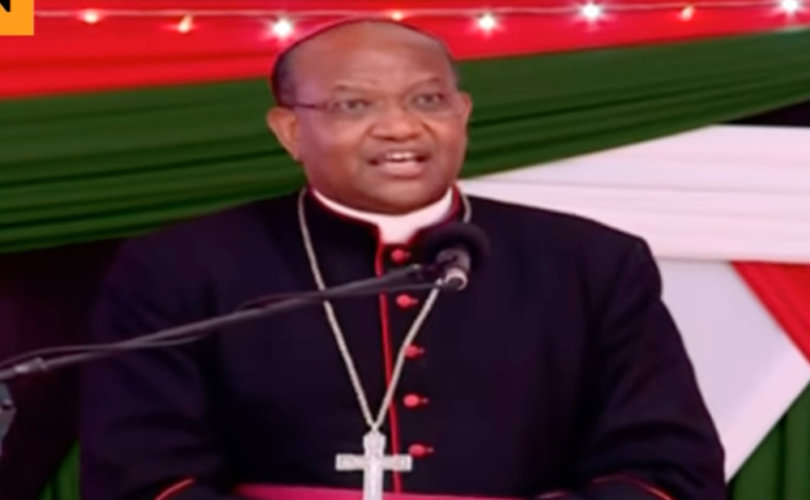 NAIROBI, Kenya (LifeSiteNews) The Catholic prelate of Nyeri, Archbishop Antony Muheria, warned Kenyan voters of the need to elect moral leaders who would respect the rule of law and work to protect the family, marriage, and the unborn, according to local news reports.

“We have in the past elected leaders whose performance in leadership remain haunting us,” the archbishop lamented, during a homily at Our Lady of Consolata Church in Nyeri. “They bring their evil to leadership, loot taxpayers money with impunity, disregard the rule of law.”

He called on Kenyans to avoid “casual or careless voting” and to find a “servant leader.”

Archbishop Muheria specifically condemned any candidates advocating for the “liberalization” of morals through pornography, drugs, and abortion.

“For a nation to thrive it must be founded on sound ethical principle,” he said. “Those who have an agenda of liberalization of sexual behavior including pornography and those proposing for destruction of our youth through liberalization of drug use must not be elected.”

Raising his voice in defense of the sanctity of life in womb, the archbishop declared, “we specifically caution and ask you to stand against bad leaders who propose to destroy life in its life initial stages in their mothers’ womb by proposing to support abortion as an agenda.”

Muheria said only candidates who respect and fear God and who promise to protect and promote the Christian family ought to receive Kenyans’ vote.

Kenya’s next General elections will be held on August 9 of this year. The offices on the ballot include the President, members of the National Assembly and Senate, county governors and members of the 47 county assemblies.