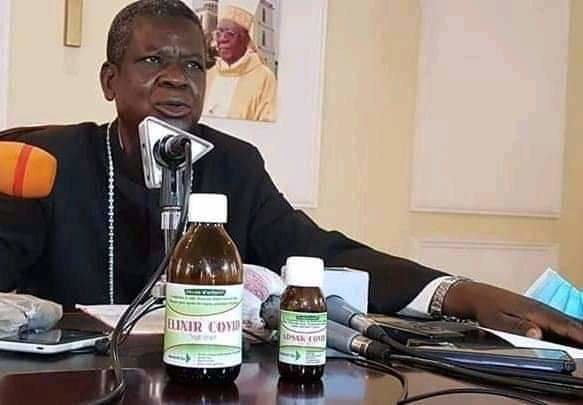 March 26, 2021 (LifeSiteNews) — Two herbal treatments for the Wuhan virus developed by Archbishop Samuel Kleda of Douala, Cameroon, and approved for use by a government scientific committee have recently been offered on the export market after having been given to some 10,000 people locally with good results since the appearance of the coronavirus through January 2021, according to its producers.

A statement published March 17 by Dr. Marius Macaire Biloa, national coordinator of the Catholic Health Association of Cameroon (OCASC), announced that the treatments Elixir Covid and Adsak Covid are now available for the foreign market, priced at 20,000 CFA francs, some 30 euro or 36 US dollars, and would be exclusively available at the Bishops’ Conference of Cameroon and at the health coordination of the Archdiocese of Douala.

The medicines have been provided totally free of charge within Cameroon and will remain free for anyone who needs them in diocesan centers all over the country.

They are currently being offered to patients after consultation and lab tests to confirm SARS-CoV-2 positivity, mainly in a dozen Catholic health centers in Cameroon’s largest cities, Douala and Yaoundé, where most coronavirus cases have been registered.

When the crisis broke out worldwide last spring, all eyes turned to Africa, and many epidemiologists warned that chaos and horrific death tolls were on the horizon because of the continent’s large population concentrations, and lack of hygiene and medical care. However, Africa, especially sub-Saharan Africa, was largely spared, with few registered contaminations and a lower death toll than in the developed countries of the West.

This did not prevent severe anti-coronavisus measures in many African countries, but the Africans did not go so far as to ban possible treatments. And it is now the continent that had the least to suffer from the pandemic.

Of course, Africa has a much younger population than the other continents and is therefore less exposed to the worst consequences of contagion by SARS-CoV-2, which mostly kills elderly or gravely ill people. But contagion itself has also been kept to a much lower level. More or less left to themselves, many African countries have chosen to confront the danger in their own way, which includes trying old, proven medicines such as hydroxychloroquine and plants such as artemisia, which was promoted in the island of Madagascar (369 deaths since the beginning of the crisis from a total population of 26.26 million).

Kleda, who was made Archbishop of Douala, Cameroon’s economic capital, in 2009 by Pope Benedict XVI, has long been known for his passion for naturopathy and herbal medicines. He first started looking for natural remedies as rector of the Little Seminary of Saint-Paul-de-Guider, in north Cameroon, 30 years ago, because “ordinary” drugs were not available to treat children.

— Article continues below Petition —
PETITION: No to mandatory vaccination for the coronavirus
Show Petition Text
1081788 have signed the petition.
Let's get to 1100000!
Thank you for signing this petition!
Add your signature:
Show Petition Text

The archbishop does not want the use of substances inspired by traditional medicine to be confused with sorcery and magic. “We treat thanks to plants and with the intercession of the Virgin Mary,” he has been known to say. Since 2009, he opened a herbal store where he received the public and gave advice in his spare time.

When the coronavirus entered Cameroon, Archbishop Kleda pleaded for a very strict confinement – but also started searching for a possible plant combination.

“I already knew the plants used for the symptoms of the coronavirus. I simply set up all the recipes that I had at my disposal,” he said in April. At the time, he said he had already treated several hundred people. “There was not one death. All those who took the medicine were healed,” he claimed.

While Archbishop Kleda has not published the formula of his treatment, he did tell the population that eating onions and garlic will rapidly reinforce the immune system of people who have been weakened by the Wuhan virus.

The College of Physicians at the time warned against many of the herbal recipes that were already circulating in Cameroon, saying they needed to be assessed for possible serious side effects. “Those who are skeptic should remain within their skepticism, that is their right; we are getting in with our job,” responded Kleda.

By the end of April 2020, he claimed publicly that he had found a natural treatment that could reduce the symptoms of the disease linked to the Wuhan coronavirus.

Immediately, dispensaries were set up and run by the Archdiocese of Douala, attracting thousands of people who got free treatment, while the Archbishop received local private funding to continue his research. By May 7, many restrictions were lifted, bars that had been subject to early closing times were opened again in the evening, and doomsayers said contaminations would skyrocket. It didn’t happen. With a population of 25 million, Cameroon had only 601 deaths attributed to the coronavirus to date.

Archbishop Kleda’s remedy attracted more and more locals, to the point that even people who needed hospital care because of the Wuhan virus arranged for it to be brought to them.

At first, a member of the political opposition celebrated Kleda’s invention, saying the remedy “should be a source of national pride.” The former head of the Cameroon barristers’ association, Yondo Black, and a number of businessmen raised money to buy medical equipment and production units for the archbishop’s new treatment. The owner of a large media group in the country also supported Kleda. Even Cameroon’s health minister, Dr. Malachie Manaouda, stepped in at the end of April in order to get a closer look at Kleda’s miracle remedy.

On May 19, the president of Cameroon encouraged “all efforts to develop a local treatment against COVID-19.”

By June, the archbishop was invited by Prime Minister Joseph Dion Ngute to join the official group of health specialists for an audition by the Cameroon Parliament. Ngute himself had already met with Kleda.

At the time, the president of the National Assembly, Cavaye Yeguié Djibril, urged all to set aside prejudice and division regarding traditional medicines, invoking the “national interest” and the necessity to update the problem. Kleda added that phytotherapy should be studied in universities so that doctors and technicians can use them correctly.

Manaouda now wholeheartedly stands behind the archbishop’s healing remedy. He stated earlier this week that the contribution of traditional medicine has mitigated the number of people who fell ill with coronavirus and helped to bring down the percentage of victims of a grave form of the illness. The Cameroon Press Agency noted last Wednesday that “by now, no one can ignore the benefits of the anti-COVID protocol set up by the metropolitan archbishop of Douala, Bishop Samuel Kleda, which has proved its worth.”

Didier Raoult, France’s charismatic infectiologist from Marseille who promoted the use of hydroxychloroquine from the start before recommending the addition of Zithromax and zinc, has repeatedly praised Africa’s pragmatic approach to the epidemic, stressing that Africans not only are prepared to use cheap drugs in new ways – something that goes directly against the interest of the pharmaceutical industry that thrives on new patents – but that they are also way ahead in science about the coronavirus with highly trained specialists and first-rate hospitals.

And contrary to many developed countries, African nations have actually been treating their coronavirus patients.

By March 23, according to statistics released by the African Center for Disease Control and Prevention, a total of 4,123,632 “cases” of COVID-19 were registered on the continent, and 110,164 people died. Africa has a population of 1.216 billion.