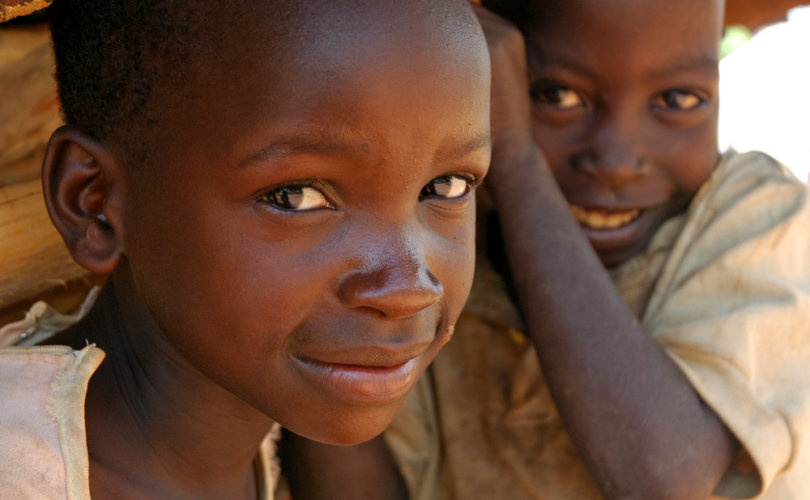 June 13, 2016 (HLI) — Unborn African babies in Uganda have been protected from abortion for a long time by strict pro-life laws. In spite of this, Uganda is filled with anti-life groups, including Marie Stopes International, the Gates Foundation, Family Health International, and many more. These groups are working hard to install a new abortion policy, a policy that would, among other things, mandate that children as young as 10 years old be put on contraceptives, including drugs that cause abortion.

Fr. Jonathan Opio, the country director for HLI Uganda since 2011, talked about this threatening issue at the Bafumbo program in late April. The Bafumbo program is a yearly gathering of married couples at the Jinja Karoli Catholic parish, where Fr. Opio often says Mass. The topic of this year’s program was the challenges facing marriage and family today. The couples in attendance were alarmed when they realized that the new abortion bill would put their ten-year-old children on contraceptives, and give them access to abortion. Many couples approached Fr. Opio after the talk, asking him what they could do to stop the bill. Fr. Opio assured them that HLI Uganda is working hard to make sure that this bill never gets passed, taking steps including petitions and informative conferences. It will be much easier to prevent this policy from ever being passed than to try to fight it once it is in effect.

In spite of the power of the anti-life groups, the country of Uganda is very pro-life and pro-family. The president of the country has encouraged abstinence and faithfulness as a cure to the spread of HIV-AIDS since he came to the presidency in the 1980s. Uganda’s HIV/AIDS infection rate, initially among the highest in the world at 30% in the early 90s, dropped to 6% in 2002 after massive campaigns that focused on abstinence and spousal fidelity.

Unfortunately, anti-life organizations are doing everything they can to promote condoms and contraceptives, and HIV-AIDS is on the rise again.

The people of Uganda themselves are eager to protect their women, children, and men from the anti-life movement. They are enthusiastic about the work of HLI Uganda, and are eager to listen to their talks. Fr. Opio also gave a talk in April to 150 student leaders in Mbale on pro-life issues and another talk to 100 4th year medical students at Makerere University College of Health Sciences, Mulago, on the termination of pregnancy and medical ethics. Both groups invited Fr. Opio to speak at future events, and many schools requested that HLI Uganda spread the message to their students. Fr. Opio has saved over 250 African babies from abortion, many of which are named after him.

Fr. Opio and the others at HLI Uganda continue their work with the prayers and support of the generous benefactors of Human Life International. The fight against the anti-life movement is a hard one, but as Fr. Opio says, “We do not have their power, but they do not have God’s power.” Fr. Opio looks forward to continuing new programs for Life in Uganda every month.