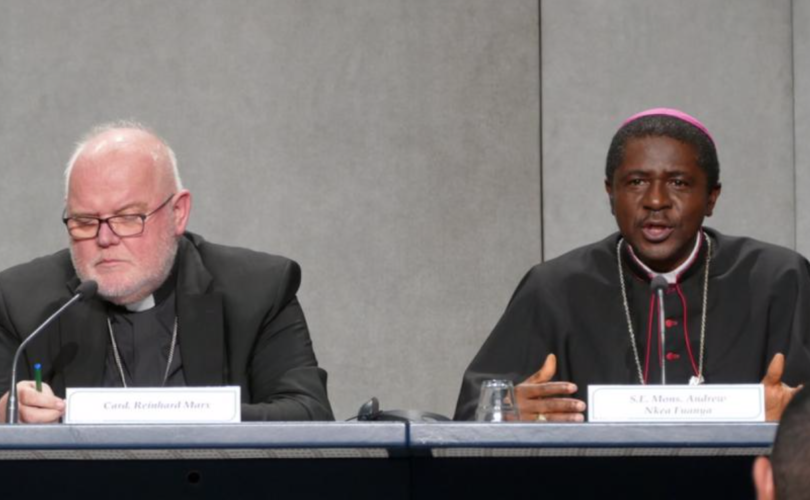 ROME, October 24, 2018 (LifeSiteNews) — The Bishops of Africa are strongly resisting pressures to include the homosexual agenda in the Youth Synod, with one bishop from Cameroon saying that “99.9%” of the young people in his diocese don’t know what “LGBT” means.

At today’s synod press briefing, LifeSite asked Bishop Andrew Nkea Fuanya of Mamfe, Cameroon, if the bishops of Africa were concerned about the acronym “LGBT” making its way into the final document of the synod. We also asked him if the African episcopate is concerned about increased ideological colonization if the world’s bishops do not resist the powerful “LGBT” lobby.

Earlier this week, Bishop Fuanya said he doesn’t think any bishop of Africa will vote for any article that contains ‘LGBT’. “We will not vote for it. In our group, we [said] if you want to talk about homosexuality, refer to this number of the Catechism of the Catholic Church,” he told the National Catholic Register.

Speaking at the Vatican press briefing on Oct. 24, Bishop Fuanya said “categorically” that if he presented 1000 youth in his diocese with a document containing the acronym ‘LGBT,’ “99.9% percent will raise their hands and ask, ‘What’s that?’”

“I will have to take my time to start explaining something I’m not conversant with,” he added, saying “I would not vote for any article that has “LGBT.”

Fuanya said the synod is not “solving problems of particular continents or particular local churches” but “looking at the Church from a global point of view.”

The Cameroon bishop also denounced the ideological colonization of Africa, saying “some Western governments,” “funding agencies” and “pressure groups” offer aid to Africa, but “tie it to these acronyms” and the acceptance of abortion and homosexual marriage.

“We cannot play into the hands of governments and funding groups,” he said.

In his recent comments to the Register, Bishop Fuanya said that the “LGBT” lobby “is not an issue for now” in Africa, adding: “so let’s not legitimize something in the Church which is not a universal problem.”

Cardinal Reinhard Marx, president of the German Bishops Conference and influential member of Pope Francis’ C9 council of cardinals, was also at the press briefing today and let out an undiscernible utterance when Bishop Fuanya said that 99.9% of young people in his diocese don’t know what “LGBT” is.

Although Cardinal Marx was not asked the question, he weighed in by saying that “the question of sexuality should not be exploited in an ideological battle,” adding that sexuality “could be a topic for an entire synod.”

“We have lobbies on every side,” he said.

Marx also said he is bemused that he is being asked about sexuality and homosexuality, saying “I’m surprised that I’m always asked questions about the same things, as if this was the core of Jesus’ message.”

At today’s presser, the archbishop of Munich also responded to a question praising his pastoral care of “LGBT” people, but said that “homosexuality does not play a central role” in the synod. “This is a Synod on young people, not sexuality,” he said.

But he also spoke of the need to “change our attitude.” The Church “needs to change, become different,” he said, adding that young people want an “authentic Church capable of listening.” Statements, he said, “must be translated into changes.”

It’s now emerging that the German language group may be making efforts to “smuggle in” the homosexual agenda under the guise of different language, and by resurrecting the much maligned Instrumentum laboris, which contains the loaded acronym “LGBT.”