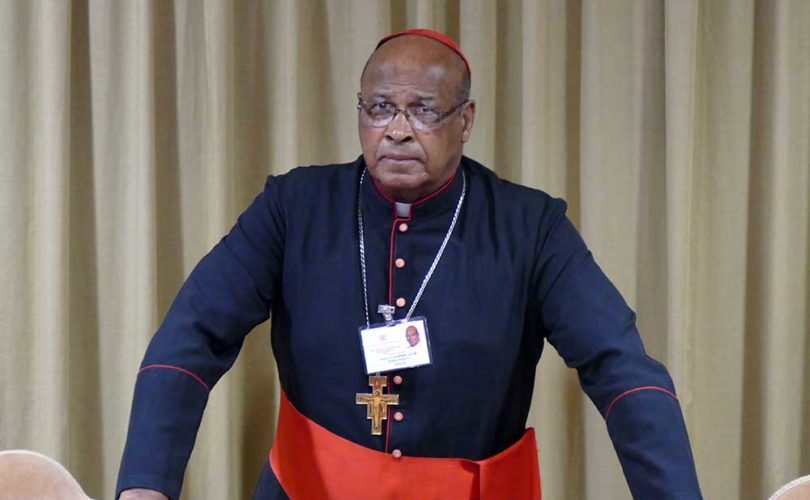 Napier, himself a black man and archbishop of Durban on the South African coast, tweeted that a “ brief study of the founding statement of ‘Black Lives Matter’ indicates the movement is being hijacked by the interests & parties committed to dismantling the very values, structure & institutions which have over the centuries undergird the best civilisations & cultures!”

A brief study of the founding statement of “Black Lives Matter” indicates the movement is being hijacked by the interests & parties committed to dismantling the very values, structure & institutions which have over the centuries undergird the best civilisations & cultures!

Napier added, “The same test applies when assessing the sincerity of those who voice thunderous condemnation against Domestic Violence, (erroneously called “Gender based Violence) as opposed to the absolute silence concerning Violence inflicted upon Babies in their mother’s womb!”

“According to the U.S. Center for Disease Control, there have been over 15.5 million abortions performed on African Americans,” Illinois Right to Life said. “These 15.5 million Black lives lost to abortion outnumber the deaths of Black people due to AIDS, violent crimes, accidents, cancer, and heart disease combined.”

US Bishop Joseph Strickland of Tyler, Texas, also criticized the movement. Bishop Strickland talked about the platform of the Black Lives Matter movement, which contains several positions Catholics can in no way support. Linking to the movement’s website, he tweeted, “Please educate yourself on this!”

He then pointed out that Black Lives Matter’s statement of belief mentions two points “that are contrary to FAITH…#1 opposing the nuclear family (where is dad?) and #2 opposing God’s plan for sex as a union of male & female.”

Please educate yourself on this! Toward the end of this statement 2 points are made that are contrary to FAITH…#1 opposing the nuclear family (where is dad?) and #2 opposing God’s plan for sex as a union of male & female. This agenda is DANGEROUS! https://t.co/pkR4p034vg

Black Lives Matter, according to its own website, wants to “disrupt the Western-prescribed nuclear family structure requirement by supporting each other as extended families and ‘villages’ that collectively care for one another, especially our children, to the degree that mothers, parents, and children are comfortable.”

The term “villages” likely refers to Hillary Clinton’s book “It Takes a Village,” the title of which was based on the African proverb, “It takes a village to raise a child.” Clinton argued for society’s shared responsibility for successfully raising a child. Catholic Senator Rick Santorum eventually wrote a rebuttal, titled, “It Takes a Family.”

In addition to wanting to “disrupt” the traditional family, Black Lives Matter fosters “a queer‐affirming network. When we gather, we do so with the intention of freeing ourselves from the tight grip of heteronormative thinking, or rather, the belief that all in the world are heterosexual (unless s/he or they disclose otherwise).”

The website’s section on “What We Believe” mentions transgenderism in several other places. “We make space for transgender brothers and sisters to participate and lead,” the movement stresses. “We are self-reflexive and do the work required to dismantle cisgender privilege and uplift Black trans folk, especially Black trans women who continue to be disproportionately impacted by trans-antagonistic violence.”

The Black Lives Matter movement claims that liberation movements for black people “in this country have created room, space, and leadership mostly for Black heterosexual, cisgender men — leaving women, queer and transgender people, and others either out of the movement or in the background to move the work forward with little or no recognition.”

Alicia Garza, one of the founders, openly admits to being a homosexual. She claims her “leadership and work challenge the misconception that only cisgender Black men encounter police and state violence.” Accordingly, in order to “truly understand how devastating and widespread this type of violence is in Black America, we must view this epidemic through a lens of race, gender, sexual orientation, and gender identity.”

Not all Church leaders are as critical of the Black Lives Matter movement as Cardinal Napier and Bishop Strickland.

Bishop George Leo Thomas of the diocese of Las Vegas had released a pastoral letter on June 10, arguing that the Church “holds that all life is sacred, from the moment of conception until natural death. Under the banner of Catholic Social Teaching, we say with resounding voices, ‘Yes! Black Lives Matter!’”